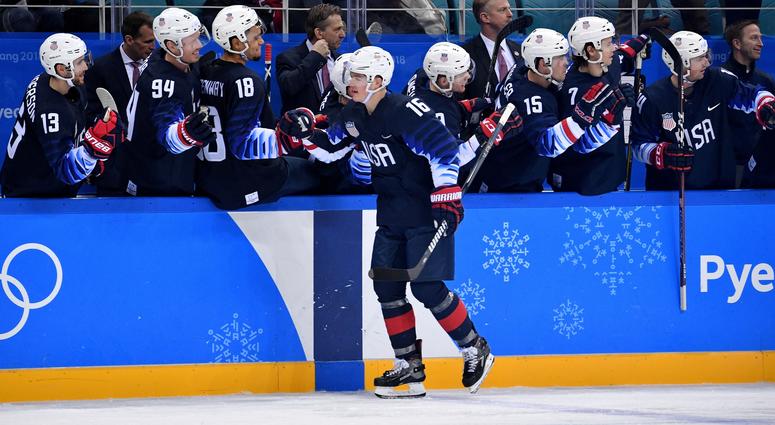 Ryan Donato supplied the offense, and Team USA hockey suddenly looks a lot stronger than it did just 24 hours earlier in the Olympic tournament.

Donato’s two goals propelled the Americans to a 2-1 victory against Slovakia Friday. Coupled with Russia’s 8-2 beatdown of Slovenia, the U.S. now finds itself atop Group B with four points ahead of its final game of group play Saturday against the Russians.

The winner there likely snatches a top four seed which means a bye into the quarterfinals of the bracket play round and a better shot at finding its way to the medal stand.

Donato, a Harvard University star and the son of longtime NHL player Ted Donato, scored early and late, with his game winner about 17 minutes from the end making the difference, as Ryan Zapolski stopped 21 of Slovakia’s 22 shots.

On a busy day in the men’s tournament, here’s what else happened…

The Slovenians were unable to extend the momentum they started by beating Team USA, as the Russian squad scored early and often and scored the most lopsided win of the tournament.

Kirill Kaprizov scored a hat trick and the Russians buried Slovenia with a four-goal second period on the way to squaring their record in the tournament. Jan Mursak, the hero of the Slovenians win against the U.S., scored his third goal of the tournament in the losing effort.

The Germans provided surprisingly stiff competition, outshooting the Swedes 28-26 but being ultimately unable to ever put a puck past Swedish goaltender Jhonas Enroth.

The Swedes’ lone goal came just two minutes into the game from Victor Stalberg, and they were then able to make it hold up the final 58 minutes of the game to stay undefeated in Group C play.

This game was actually a lot closer than the score indicated, as Finland had just a 2-1 advantage near the midway point of the third period before they finally were able to break the game open.

Now it sets up a big matchup between big rivals, as Finland and Sweden each are unbeaten, with the winner of their game Sunday having a real shot at the top seed for bracket play.

Big One in Group A

Canada and the Czech Republic each started with wins in Group A, and they’ll square off Friday night in a game that likely decides the winner of that group and another high seed.

Host South Korea played surprisingly well in its opener against the Czechs and will look for their historic first hockey win as well as they face Switzerland.