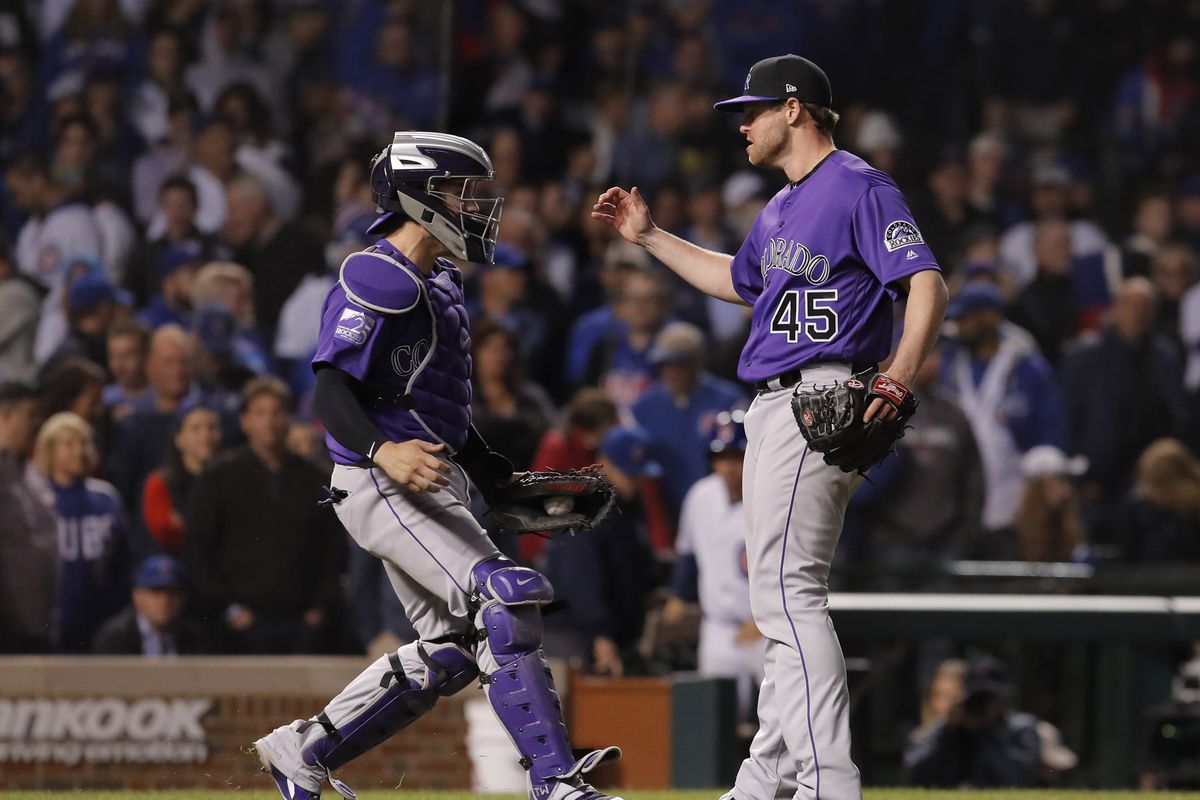 Rockies Tony Wolters and Scott Oberg react after securing the final out of Colorado's NL Wild Card win over the Chicago Cubs.

It took over five hours, but the Colorado Rockies did it! Tony Wolters punched a 2-out single into centerfield to bring home Trevor Story with the go-ahead run in the top half of the 13th inning. After getting the final out of the 12th inning, Scott Oberg struck out the side in the bottom half of the 13th to send the Rockies through to the National League Division Series, beating the Cubs 2-1.

After failing to record much of anything in the way of timely hits, the Rockies finally put it together in the 13th, and it all came with two outs. After two big bats in DJ LeMahieu and Nolan Arenado were retired to begin the inning, Story stroked a base hit into left center field. He was followed by Gerardo Parra, who was a tough out at the plate all night after entering as a sub in the latter innings. Parra smacked a base hit to right field, enabling Story to reach third. That set the stage for Wolters to enter the game as a pinch hitter. The third Rockies catcher of the night made the most of his one inning of action, taking a Kyle Hendricks pitch and grounding it right back up the middle to plate Story. The 26-year old Wolters had had just 182 at bats in 2018 and was batting just .170 on the year.

As evidenced by the final score, dominant pitching was the story of the night. Starters Kyle Freeland and Jon Lester were both brilliant, allowing just one run between them. Freeland through 6.2 innings of shutout ball, allowing just four hits and striking out six for Colorado. Lester settled in after giving up a run in the 1st to pitch six innings for Chicago. He also only allowed four hits while fanning nine.

Both were long gone when the final out was recorded shortly after 1 a.m. Eastern. Oberg got the win and Hendricks took the loss. The use of relievers as the game wore on was drastically different between managers Bud Black and Joe Maddon. Not a single Colorado reliever pitched fewer than 1 whole inning, with Wade Davis, Seunghwan Oh and Oberg all getting four outs or more. All told, six Rockies pitchers took the mound in the game, compared to nine for the Cubs. Chicago had four relievers throw less than an inning and deployed two starters in the extra innings in Hendricks and Cole Hamels.

The Rockies opened the scoring right away in the top of the 1st against Lester. Charlie Blackmon drew a lead-off walk. He then advanced to third on a ground rule double by LeMahieu and came home on an Arenado sacrifice fly. The 1-0 lead nearly held up for a whole 27 outs, but the Cubs wouldn’t go that quietly. Anthony Rizzo poked a single to center with 2 down in the 8th inning. He was subbed out for pinch runner Terrance Gore, who promptly stole second. Javier Baez then came through with a double into center to easily plate the speedy Gore and ultimately send the game into extras tied. The Rockies registered 11 total hits in the game while the Cubs had just 6.

With the Wild Card Game win, the Rockies move on to the NLDS where they will tangle with the NL Central champion Milwaukee Brewers. The Brewers defeated the Cubs in the tie-breaking game 163 on Monday to win the division title and avoid the one-game Wild Card round.

Games 1 and 2 of this series, as well as the other NLDS between the Los Angeles Dodgers and Atlanta Braves, are scheduled for Thursday and Friday in Milwaukee and Los Angeles respectively.