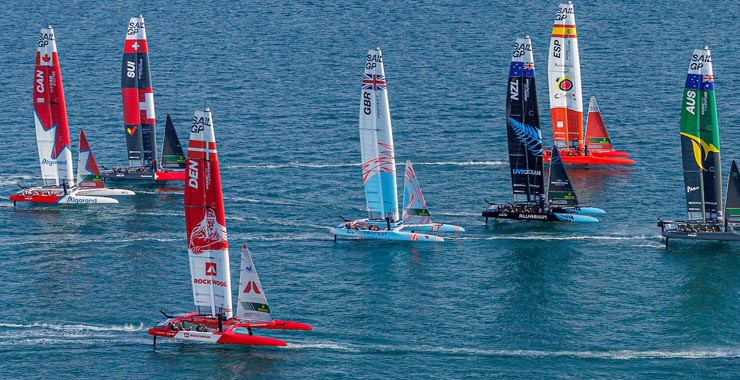 With the continued global expansion, Sail Grand Prix is set to kick off its season 3 in Singapore, starting today. The iconic city-state of Singapore is going to host Asia’s first-ever Sail Grand Prix. Supported by the Singapore Tourism Board, it’s the eighth leg of the seven-stop global championship, after previous legs in San Francisco, Saint-Tropez, and Sydney.

The racing event will occur at the adrenaline-fuelled Race Village in Parkland Green, East Coast Park. While Sail fans in the USA have to be contented with CBS, which has been home to Singapore Sail Grand Prix 2023 for the last decade or so. Once you get hold of their subscription, you will be able to watch the game on your mobile phones as well as TV screens. All the cord-cutters using digital streaming services will have to tune into OolaTV to catch all the live action.

You can also catch all the action live from your boat with this package. You’ll have to purchase a SailGP flag to get the closest view. This package includes exclusive access to both days of racing, preferred positioning in the front row, live race commentary over VHF and that souvenir flag on your boat will be delivered to your home address.

It is worth mentioning that this package is only applicable for SZ-registered or foreign-flagged vessels, and note that if you don’t buy a flag, your boat will be held at least 200m behind the flag-bearing boats.

All teams will be competing for points in six fleet races and one final top-three shootout in the ongoing quest to be declared as the overall season winner.

Following are the Season 3 championship standings of the teams mentioned above after seven events:

Following is the list of crew and substation lineups for each team:

The event offers its spectators experiences both on & off the water. If you want to catch the live action of the Grand Prix, you can buy tickets from the official website of SailGP (sailgp.com).

Waterfront Access Package: With this package, fans can watch the action on the water or through Live broadcasts on the big screens within the general spectator area. You’ll also have access to a Race Village teeming, where you can witness activity stations and enjoy the official Sail GP merchandise booths and food and beverage outlets.

The SailGP Beach Club Package: Fans can witness the thrills and drama of SailGP up close with this package. This package includes all-inclusive food and drink (beverages), a live DJ, and dedicated screens.