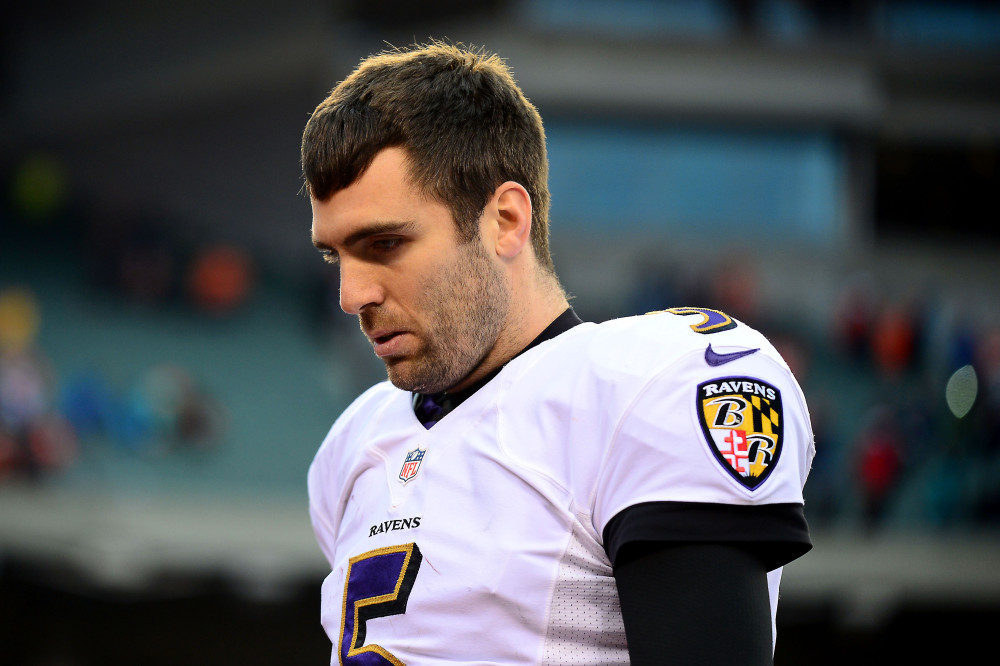 It was announced that Lamar Jackson would become the full-time starting quarterback for the Baltimore Ravens, sending Joe Flacco to the bench for the first time in his career.

This is the end of an era in Baltimore. Since joining the Ravens in 2008, Joe Flacco has taken the team to the playoffs six times and delivered a Super Bowl championship in 2013. But it’s apparently out with the old and in with the new, as rookie Lamar Jackson has been given the keys to the family car.

The Ravens have said they will send Flacco out “with class,” whatever that means. What’s the nice way of giving away someone’s job?

Flacco doesn’t appear too happy on the sidelines, as he’s found a spot next to fellow quarterback cast-off, RG3.

In 2012 these guys owned Maryland football. Oh how the mighty have fallen. #Elite pic.twitter.com/Rnmx9D7Uxp

Apparently, Baltimore is collecting past their prime MD/D.C. quarterbacks on their sidelines. I’m surprised they haven’t reached out to see what Kyle Boller and Jason Campbell are doing.

The thing with Flacco is that he will be turning 34 in January, so he’s going into the tail-end of his career. Also, he has five kids under five years old, so moving across the country may be difficult for him. Having that many kids is a challenge when it comes to moving schools. It is for that reason that Philip Rivers still lives in San Diego and commutes to Los Angeles every day so he didn’t have to uproot his family.

This situation isn’t all bad for Joe, as this means Flacco will have his choice in where he plays next season– something not many guys have the luxury of. Here is my list of teams that make sense for Joe in 2019.

This might be the end of the Eli Manning era in New York too. This move makes sense if the Giants draft a quarterback high next April and want a stop-gap option. When the Chiefs drafted Patrick Mahomes, they had Alex Smith to teach him the ropes. Flacco could be this team’s Alex Smith. The Giants have an elite ground game and a top-5 wide receiver, Flacco would excel in that situation.

Speaking of Alex Smith, the Redskins may be looking for another option at quarterback if Smith doesn’t recover from his broken leg. With Colt McCoy also on the shelf, the Redskins are in need of options under center. Side note– what is with the Redskins and their love affair with Colt McCoy? They love him more than most people love their children. It’s mind boggling. I digress. This team makes sense for Flacco, as it would mean he wouldn’t have to uproot his family and move away. Flacco could “comfortably” commute to Landover from his house in Baltimore. I say “comfortably” because hell hath no fury like the Baltimore–Washington Parkway in rush hour. But the Redskins would be a pretty good fit for Flacco in my estimation.

This one makes the most sense, if Flacco is willing to move his family long-distance. First, there are a ton of similarities between the Ravens and the Jaguars. They are both teams built around strong defenses and a good running game. It would be a seamless transition for Flacco. The Jags are interesting, because even just average quarterback play will take them deep into the playoffs. We saw it with Blake Bortles, and he was a strong second half away from going to the Super Bowl. I’d say right now this would be the odds-on favorite to sign Joe.