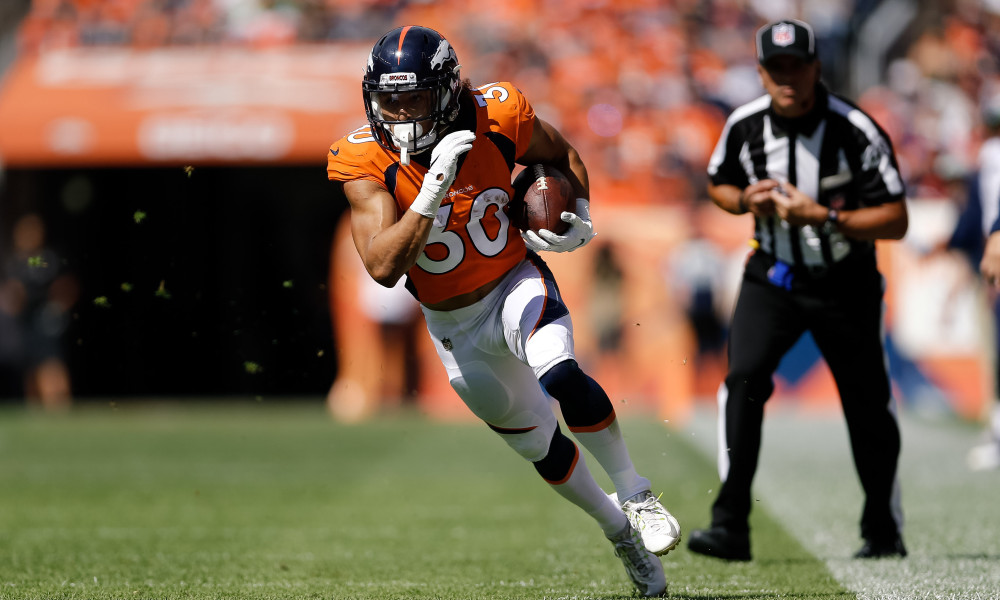 With the first Sunday of the NFL season in the books, it is officially Overreaction Monday. The hot takes will come from all angles and the media gas bagging won’t stop until Week 2 provides a whole new set of headlines to debate. Ultimately, it’s up to each individual to diagnose what is and is not an overreaction, but here are my takes on some of the most notable results of the weekend.

We knew James Conner would get the volume, as Le’Veon Bell chose to extend his holdout through the season’s opening game. Heading into Week 1, I figured James Conner would hover around the RB 18-20 range in terms of fantasy points. The abilities that Conner seemed to lack from his arsenal that the do-it-all Bell can deploy are above-average pass catching and blocking. This led me to wonder if he might forego the majority of third and passing down work. That sentiment was hardly the case. Conner toted the ball a whopping 31 times, piling up 135 yards rushing and 2 touchdowns. He added 5 receptions for 57 yards to boot.

For the Steelers, it was really the ultimate way to “stick it” in the face of Bell. Not only did he lose out on the game check, but he watched as a far lesser known back stepped right into his high-usage role in the offense and succeeded. Playing running back for the Steelers guarantees you a large weekly volume and sets you up to excel in the offense. DeAngelo Williams found substantial success in prior years when Bell missed time to injury and suspension. With plenty of playmakers at receiver and the steady Ben Roethlisberger under center, Le’Veon Bell himself is a commodity, not a necessity to the Steelers. I firmly believe this team will be just fine with James Conner, should the holdout continue.

Takeaway: The Broncos Backfield Will Be an Even Timeshare

Oddly enough, Vance Joseph didn’t name either Royce Freeman or Phillip Lindsey the Week 1 starting running back. That honor went to Devontae Booker, who promptly registered just 4 yards on 2 carries yesterday. Meanwhile, Freeman and Lindsay each got 15 touches, and both gained exactly 71 yards with those touches. Lindsay ultimately had the better stat line on the day, as he added 2 catches for 31 yards and a touchdown. The hype throughout the preseason has been around Freeman, the rookie out of Oregon. Many felt that he had done enough to earn the lion’s share of the workload starting right away in Week 1. The former Colorado Buffalo, Lindsay mostly flew under the shadow of Freeman throughout the preseason, but he quietly had a very impressive camp as well.

Both backs are versatile and can get it done in the passing game. As long as both continue to produce when given the opportunities, the even carry split we saw yesterday could very well be the norm going forward. Whether or not they really cannibalize each other’s fantasy value will depend on how much the Broncos utilize them in the overall offensive scheme. Both should be rostered, but trying to predict one earning a dominant volume is risky business for the time being.

For more information on this, you can check out our breakdown of the snap share and performances here.

Yes, Jimmy G threw three interceptions and completed less than half of his passes yesterday. No, it was not at all what we were hoping for after the magical run down the stretch last season. Yes, he was going up against a defense yesterday that was better than probably any he saw last season, aside from maybe the Jaguars. The Vikings defense is legit. Given that it was Week 1, they were also fully healthy. You could see the entire San Francisco offense struggling yesterday coming from a mile away, if your eyes were open. The fact that Marquise Goodwin injured his quad in the first half didn’t help things, but Pierre Garcon was completely shut down as well by the Minnesota secondary. Garoppolo will bounce back from this in my mind without a doubt. You have to remember he is working with one of the best offensive minds in the NFL today in Kyle Shanahan. If an owner in your league is freaking out after yesterday and trying to dump him for cheap, feel free to take the offer. While you’re at it, scoop up Dante Pettis if you have the room. If the rookie speedster keeps torching defenders deep, his volume will only climb as the season progresses.

It sure was nice to see the Colts offense getting up and down the field again in the return of Andrew Luck. Jack Doyle was the team’s leading yardage receiver, with 60 on 7 receptions. Fellow tight end Eric Ebron had 4 catches for 51 yards and he reeled in a touchdown. So, can an offense that counts T.Y. Hilton, Ryan Grant, and the explosive rookie Nyheim Hines among its pass catchers really sustain production for two tight ends this season? Yes, in fact, it can. The skillsets deployed by Doyle and Ebron differ drastically. Both have the size to play the tight end position, but Doyle reflects the soft-handed, short to intermediate route runner. Many of the game’s most successful pass-catching tight ends do so as safety blankets for their QBs. That defines Doyle’s role in Indianapolis.

Meanwhile, Ebron, after years of disappointment in Detroit, is better able to get up and down the field thanks to his speed. He runs routes more like an oversized receiver. I predict two-tight end formations could become increasingly common in Indianapolis as the year goes on. Both Doyle and Ebron should be rostered in fantasy leagues.

Takeaway: Derrick Henry Again Finds Himself on the Low End of a Timeshare

The lightning-delayed six-and-a-half-hour marathon in Miami yesterday was ultimately a brutal Week 1 showing for Derrick Henry. Ten carries garnered a mere 26 yards, and he only had a single catch for 5 yards otherwise. It was Dion Lewis who acquitted himself in the Tennessee offense nicely yesterday. He turned 16 carries into 75 yards and a TD, and he added 35 yards on 5 receptions. So, this backfield is going to be primarily Lewis moving forward right? Let’s not get ahead of ourselves there.

The takeaway for me here is that Lewis may have a greater value in non-PPR Fantasy formats than people realized. That does not mean that Henry won’t be heavily involved. It is worth noting that Henry got 8 touches yesterday before Lewis got his first. With the status of Marcus Mariota on red alert after he suffered an elbow injury yesterday, the Titans offense may find itself leaning on the ground game in the coming weeks. Under those circumstances, the big, physical Henry is the back to get the job done. And oh, by the way, since we spent enough time waiting for a result out of this game, I’ll just confidently add the bold prediction that Frank Gore out-gaining Kenyan Drake will not be the norm for the Dolphins going forward either.