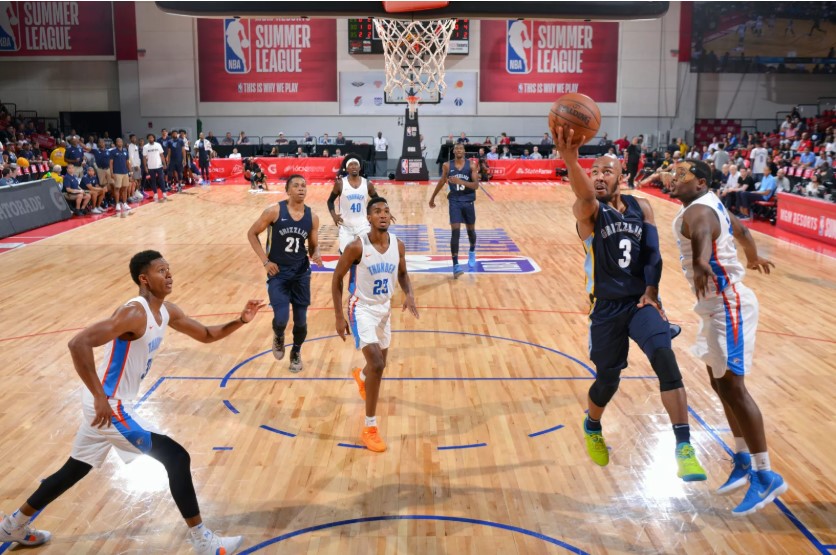 Jevon Carter’s first Summer League got off to a rough start. Carter, predominantly known for his defensive ability, was a second-round pick of the Grizzlies in this year’s NBA Draft. The two-time Defensive Player of the Year at West Virginia was viewed as a suitable backup for Mike Conley.

The early excitement in Memphis was stifled by Carter’s poor start to Summer League. The impromptu nature of Summer League does not suit Carter’s one-on-one defensive prowess. On top of that, Carter was still growing offensively as a senior at WVU. He struggled to facilitate and seemed uncomfortable in certain sets. Luckily for Memphis, Carter seemed to figure some things out Thursday night.

Putting It All Together

Carter put together what was undoubtedly his best performance of the summer against the Thunder. Defensively, he was as aggressive as usual. The great improvement came at the offensive end. Most importantly, the former Mountaineer dished out 8 assists in the win. That sort of ball distribution was nice to see from someone who seemed a bit lost in that aspect at first. Carter also scored the ball well. The rookie posted his Summer League high with 19 points on 7-17 shooting (41.2%). Carter completed the all-around effort with 7 rebounds.

Carter’s day was not perfect, but it did not have to be. Summer League is largely about improvement. The 5 turnovers for the game was far too high, and the shooting efficiency will need to get better. That said, plenty of young guards have issues with ball security and shooting efficiency. In fact, it would be fair to say the two issues are the most common with young NBA guards on an annual basis. If Carter can limit his struggles to those two areas, he will be in much better shape than it originally appeared.

Fourth overall pick Jaren Jackson Jr. backed up Carter in the team’s winning effort. Jackson continued his strong summer play with 16 points, 6 rebounds, and 3 blocks in 29 minutes. The Michigan State one-and-done shot 5-10 from the field (50.0%) and 6-11 from the foul line (54.5%). Jackson Jr. only turned the ball over once in the 92-85 win.

Lack of Top Prospect Catches Up With OKC

The Oklahoma City Thunder have avoided the lottery for most of recent history. That, of course, is great for the NBA franchise, but does leave them without a premium of high draft choices. The lack of top developmental talent was apparent in the team’s Summer League roster. That is not to say that the roster is made up of horrendous players. Several of the team’s Summer League players, including Deonte Burton and PJ Dozier, were NCAA standouts during their college basketball days.

That closest thing to an elite NBA prospect on the roster is probably former Kentucky Wildcat Hamidou Diallo. Diallo, a former 5-star recruit, was a bit overshadowed by the talent around him at Kentucky. That saw the 6’5″ guard fall to the middle of the second-round where Oklahoma City selected him.

Diallo played well in the loss to the Grizzlies. The rookie had 14 points on an effective 6-10 shooting (60.0%). He added 5 rebounds to the effort. Such production will aid Diallo in his quest for a rotational role with the Thunder. The team lacked depth at multiple positions in 2017, and therefore any player who can change that sooner rather than later will likely get the chance to do so.