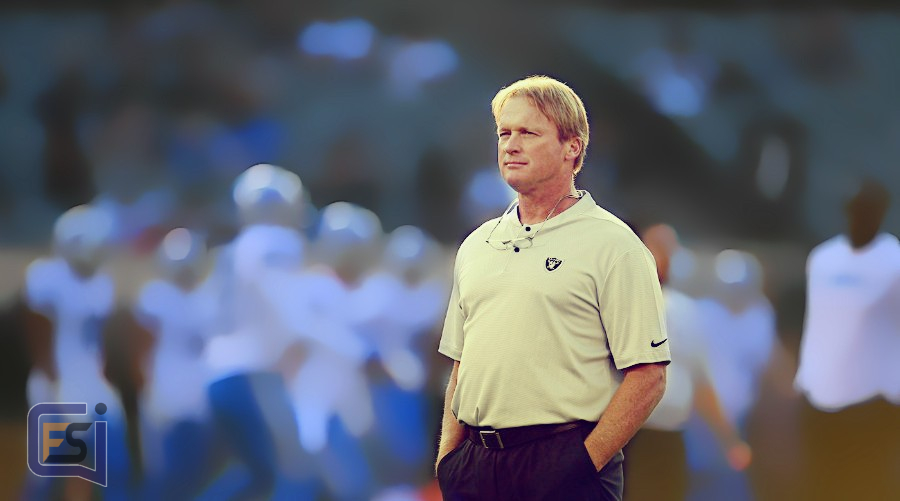 Days Until Football is a series in which I preview every NFL team, one a day at a time until the NFL season starts on September 6th. It will preview offense, defense, and give a prediction for the team’s record. Also, I will list a fantasy star and sleeper. Here is the Oakland Raiders preview.

Last year, the Raiders were a letdown. After making the playoffs two years ago, Derek Carr regressed, the defense was bad, and Jack Del Rio was fired. Oakland finished 6-10, third in the AFC West.

After being an MVP candidate two years ago, Derek Carr was bad last year. He was worse in touchdowns, interceptions, and passer rating. Jon Gruden was hired as head coach and Greg Olson was hired as offensive coordinator to try and help Carr get back on track. Marshawn Lynch came out of retirement to play for his hometown team last season, but he did not play much. He only averaged 13.8 carries per game, but that should go up under Gruden’s run-heavy system. If Derek Carr bounces back, Amari Cooper will as well. Cooper averaged over 1,100 yards in his first two seasons, but only racked up 680 yards last year. The Raiders also brought in Jordy Nelson to the dismay of most of the FlurrySports staff. Nelson picked up 69 touchdowns and 7,848 yards in his time with the Packers. Oakland also traded for Martavis Bryant, who is a deep ball threat, but has had multiple suspensions. Jared Cook’s first season in Oakland did not disappoint. His 54 catches for 688 yards were both career highs. He also started the full 16 games for the first time in his nine-year career.

Khalil Mack is the only superstar on the defense, for now. The former all-pro is on the trade block because of contract disputes with the Raiders. Mario Edwards Jr. and rookies will have to fill the pass-rushing void. Xaverian alum Maurice Hurst Jr. had the first-round potential, but medical issues made him drop in the draft. PJ Hall is a defensive tackle from Sam Houston State who was drafted in the second round. Assuming Mack is gone, Bruce Irvin will be the best linebacker and defensive player on the Raiders. Irvin has 15 sacks and 85 tackles in two seasons with the Raiders. Behind Irvin, the secondary is very bad. David Amerson, Sean Smith, and TJ Carrie are no longer on the team. Rashaan Melvin, Shareece Wright, Leon Hall and Daryl Worley are expected to compete for a starting corner job. The safeties are better, as Karl Joseph and Reggie Nelson are expected to start.

I think the Raiders will go 6-10, last in the AFC West. Derek Carr needs to rebound, but there is no guarantee he does. Amari Cooper needs to get back to his old days and Marshawn Lynch needs to make more of an impact then he did last year. The defense is young and unproven. The coaching staff is new and Gruden has not been on a sideline for a long time. The six games against the Chiefs, Broncos and Chiefs will be too tough overcome.