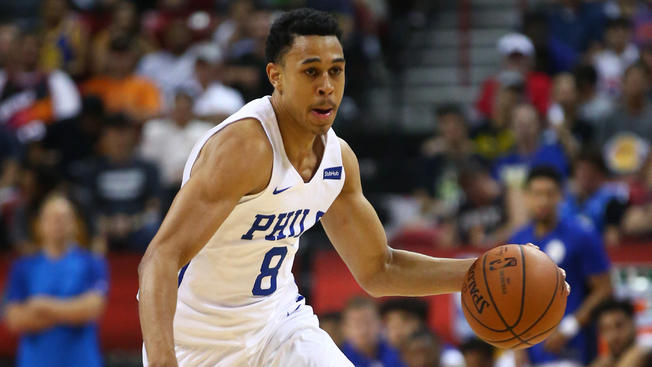 Josh Hart played College Basketball at Villanova, just outside the city of Philadelphia. Saturday night, the second-year guard led the Los Angeles Lakers with 24 points en route to a 96-79 NBA Summer League triumph over the Philadelphia 76ers. Hart shot an impressive 9-15 from the floor, including 4-8 from three-point range. He played in 63 games in the 2017-18 NBA season as a rookie. Saturday marked Hart’s third appearance in a 2018 Summer League game, and it is still unknown if he will see more action.

The Lakers were also able to step things up on the defensive end throughout the contest, resulting in several impressive numbers. The 76ers were held to just 3-29 (10.3%) shooting from beyond the arc, and had no player shot better than 46% from the field for the game. The Lakers also came up with 19 turnovers, 13 steals, and 7 blocks.

Lakers 2018 second-round pick Svi Mykhailiuk put together a fine box score as well, checking in with 17 points and 9 rebounds across 23 minutes of action. He has the reputation of strictly being a shooter, but the rebound total from Saturday’s game showed a willingness to hustle on the boards as well. First-round selection Moritz Wagner out of Michigan contributed 16 points and 8 rebounds to cap off a stellar first week of Summer League play. Nick King scored 15 points and Xavier Rathan-Mayes was the final Laker in double-digits with 10.

After trading away the rights to another Villanova product Mikal Bridges to claim Zhaire Smith out of Texas Tech, the 76ers saw their first rounder lead the offensive attack Saturday night. Smith’s final stat line included 16 points, 2 rebounds, 3 assists, 3 steals and 1 block. He showed flashes of brilliance throughout the game in multiple phases, including the fantastic photo-op dunk below.

After spending 2017 in the G League, Cameron Oliver nearly achieved a double-double in this Summer League contest, finishing with 12 points and 8 boards, including 4 offensive rebounds. The final 76er in double figures was former 2016 second-round selection Demetrius Jackson, who racked up 5 assists to go with his 10 points.