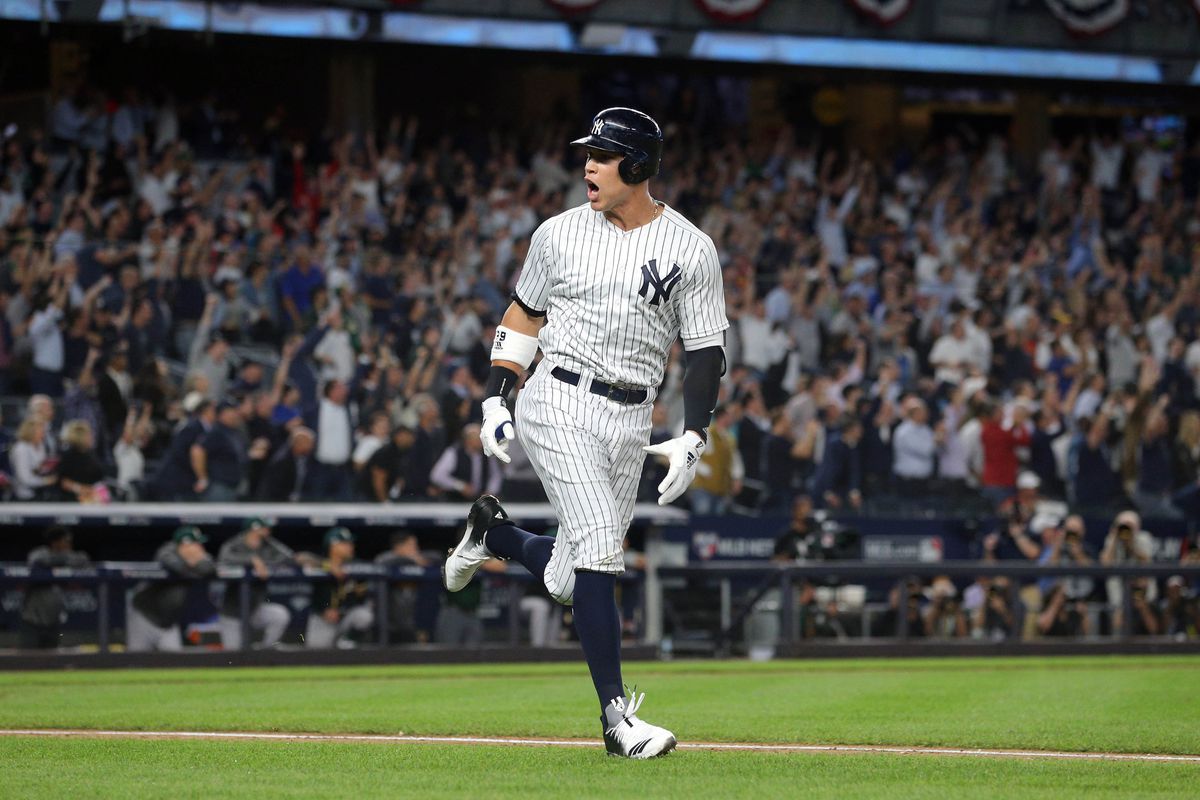 Aaron Judge reacts after hitting a 1st inning home-run to give the Yankees an early lead.

“WE WANT BOSTON!” was the chant raining down from the Yankee Stadium crowd in the latter stages of Wednesday evening’s AL Wild Card Game. Well New York, you’ve got Boston. Aaron Judge started the party with a two-run homer in the bottom of the 1st inning, Luke Voit smacked a two-run RBI triple in the 5th, and the Yankees coasted to a 7-2 win over the Oakland Athletics to advance to the American League Division Series.

By finishing three games better than the Athletics in the regular season, New York earned the right to host the Wild Card Game. While home field advantage often isn’t as big a factor in baseball as in other sports, the construct of these two teams and the vast differences in their respective home ballparks made it critical. The Yankee Stadium effect was felt right away when Judge, the second Yankee hitter to come to the plate, clubbed a Liam Hendricks offering into the leftfield bleachers. That set the home crowd into immediate jubilation, and they would remain in that state for the entire evening.

The score stayed 2-0 into the bottom of the 6th when the New York bats came to life again. After Judge led off against Fernando Rodney with a double, Aaron Hicks hit a double of his own to bring him in. Giancarlo Stanton then took first base on balls, and Blake Treinen was summoned from the bullpen to try and get the A’s out of the jam. The All-Star closer, dominant all season long, couldn’t escape trouble this time. Voit stroked a triple off the wall out in right, barely missing the glove of right fielder Stephen Piscotty, who made a heck of an effort on the play. Both Hicks and Stanton scored. Voit was brought home on a sac fly by Didi Gregorius and the Yankees were in full command. The only Oakland offense on the night came when Khris Davis belted a two-run homer in the top of the 8th off Zach Britton. Stanton got one of those runs right back for New York with a solo homerun in the bottom half of the inning to conclude the scoring.

Oakland made Yankee starter Luis Severino work over four innings, but they could never plate a run against him. Severino didn’t last long enough to get the decision, but he piled up seven strikeouts and only allowed two hits. He was relieved by Dellin Betances, who took the win, striking out three over two innings of work. Despite going with a traditional starting pitcher, the Yankees used only one fewer arm (5) than the Athletics (6), who rolled the dice by choosing to forego a starting pitcher and have the bullpen work the entire game. Hendricks took the loss, courtesy of giving up the first inning homer.

While Bob Melvin’s all-reliever approach paid off in the performances of Lou Trivino, Shawn Kelley and Jeurys Familia (two combined hits allowed across five innings pitched), it was a gamble to think everyone coming out of the pen would have their stuff. The normally reliable Rodney and Treinen let Oakland down in a big way during the middle innings, and the A’s found themselves with an insurmountable deficit as a result.

The win marks the second-straight year the Yankees have emerged victorious from the Wild Card Game. After coming within a game of the World Series last year, their quest to take that next step now runs through their bitter rivals, the Boston Red Sox. Boston finished with the best record in all of baseball, but the Yankees can’t be slept on as a Wild Card team, given that they too reached 100 wins. Games 1 and 2 of the series, as well as the other ALDS matchup between the defending champion Houston Astros and Cleveland Indians are scheduled for Friday and Saturday in Boston and Houston, respectively.