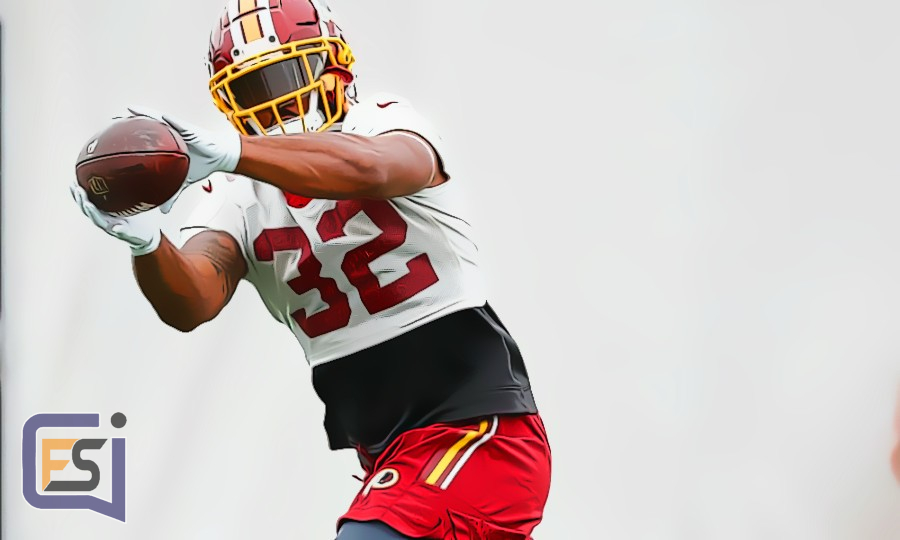 By now, we have all heard the terrible news that rookie Derrius Guice tore his ACL in the first preseason game, which will cause him to miss his first season. If you already drafted him in your fantasy league, I’m sorry, but let’s move on. When one man suffers, another benefits, so who stands to benefit most from the Guice injury? In my opinion, it’s Samaje Perine, and here’s why.

Samaje Perine’s rookie season was a letdown on nearly all accounts. Obviously this isn’t a point that supports my argument, but I will get to that later. First, I want to set the stage and explore what we know about Perine already, and what we know is he didn’t live up to the hype last season.

At this point last year, Rob Kelley was still listed atop the depth chart, with the hope that Perine would overtake him to lead the rushing attack. Everything seemed to set up perfectly, with Perine being given 21 carries already in the second game. However, those 21 carries turned into just 67 yards, a 3.2-yard average. The next game was worse, averaging just 2.6 yards per carry on 19 rushes. It was at this point that Washington realized the weapon they had in Chris Thompson, so they used him more to generate some type of energy for this offense.

After October 23rd, the offensive line became a mess. A number of serious injuries caused the group to be a revolving door of not only lesser talent, but also new lineups with no chemistry. It became tough for just about everyone offensively. However, Perine’s services were needed on November 19th, when yet another injury occurred. Fellow back Chris Thompson went down for the year, so Perine needed to shoulder a heavier load. That week, he ran for 117 yards and a touchdown on 23 carries. He followed that game up with a 130-yard, 27-touch performance.

Perine would continue to have double-digit carries and a few catches in every game but week 17, though he wasn’t efficient. He averaged just 2.8 yards per rush during his final five games. He finished his rookie season with 603 rushing yards and one touchdown, on a 3.4-yard average.

After rookie Derrius Guice went down, the backfield looks essentially as it did last season. The three relevant backs now are Chris Thompson, Rob Kelley, and, of course, Samaje Perine. There’s some who feel the need to mention Kapri Bibbs as well, but he only becomes relevant without Thompson, since both play the receiving, change-of-pace role.

Speaking of Chris Thompson, it is foolish to think his stock suddenly spikes with the Guice injury. If you see fantasy “experts” around the industry saying this, call them a fool, courtesy of Zach Brunner. However, Thompson is the highest-ranked back on the team right now. His role is not affected by the injury is all I’m saying. He was one of the most electrifying players, at times, last season. Thompson is still battling back from injury, but should be good to go for week one, per my sources. He carried the ball double-digit times only once last season, which was a huge mistake. Given the injury history and his size, there’s no way he becomes a bell-cow for this offense. Draft him first, but there’s more value to be had.

“Fat Rob” was an even larger disappointment than Perine last season. Being drafted first, many assumed he would be the most valuable back in the Washington backfield last season. He doesn’t catch the ball and he’s an inefficient runner. Kelley finished the season with a poor 3.1-yard per carry average, and he recorded just one rush over twenty yards. In week 1 of the preseason, he picked up where he left off. Kelley was given four carries that went for just six yards. In the same game, Perine took seven carries for 31 yards.

When the Offense Plays Well…

This should be obvious, but when the players around Perine play well, it allows him to play better. Let’s start with the offensive line. Like I previously mentioned, the offensive line was depleted last season. Pro Bowl left tackle Trent Williams said during the season, “We’re just surviving, honestly.” He said this while he played though a knee injury that required surgery. Four starters and two backups were all injured at the same time. It’s a recipe for disaster, but getting the group back healthy will improve this offense dramatically. It’s often overlooked, unless they’re terrible, but the offensive line in the most important position group in the league. And you can trust me, I’m an O-Line coach.

An injured line affects everything, but there were times when the passing game was just bad last season. And when a team cannot move the ball through the air, defenses can stack the box and stop the run. In games where Perine was given at least 15 carries and Cousins passed for over 200 yards, Perine averaged 3.84 yards per carry. In the games where he received that workload and Cousins failed to reach 200 yards, Perine averaged just 2.95 yards per carry.

The offense has a few new faces for this season. At quarterback, Washington will have Alex Smith, who played his best football last season and he seems to be a better fit for this offense. The Redskins also brought in receiver Paul Richardson and re-signed Brian Quick, who seems to be a bit underrated. We can also consider tight end Jordan Reed as an addition to this year, since he played just six games and was injured throughout last season. With these key additions and improved health, the offense overall should be much better, which will open up the running game, compared to last season.

We have determined that Samaje Perine and Chris Thompson are the two backs that will have value this season, but how will the workload be split? Unfortunately, we don’t have much of a sample size where both guys were healthy and in the game. I think the closest thing to what we will see this season comes from week 3 against the Raiders. In the game, Chris Thompson had eight carries for 38 yards and six catches for 150 yards. Perine added 19 carries for a pitiful 49 yards and a catch for six.

Ignoring the yards for both players, I think this is the type of split we can expect once Thompson has all restrictions taken off. Perine won’t catch much with Thompson healthy, but will near 20 carries. Thompson will be around 8-10 carries and 4-6 catches. A 20-15 split for touches between the two backs should be regular, with Kelley possibly being a plodder.

In short, Perine will be given the majority of the touches, including early down work. With an improved offensive line and passing attack, finding running lanes should come easier than in 2017. Perine’s ADP (Average Draft Position) still has him coming off the board in the 12th-13th rounds, which makes him a major steal for drafters today.