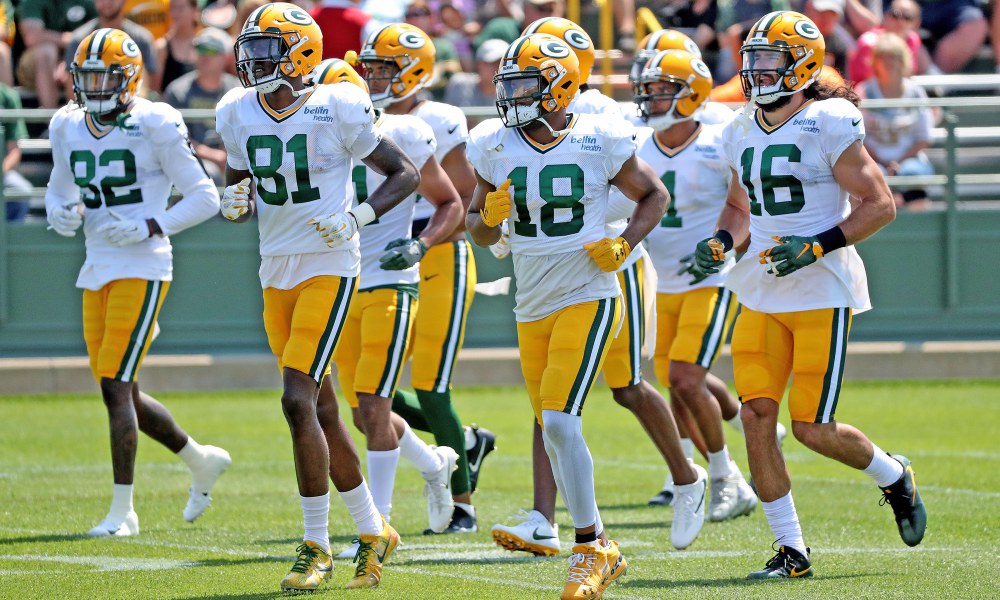 This time of year, fantasy football owners are preparing their draft boards and tiers. While the top backs and targets for NFL teams are almost all solidified, there are plenty of roles that are up for grabs. These are the fantasy-relevant training camp battles for the NFC North. In this series, I am omitting players who are obvious starters; players like Jordan Howard, Matthew Stafford, Davante Adams and Kyle Rudolph.

The Chicago Bears have completely revamped their WR group. It began with one of the most notable free agent signings of 2018: Allen Robinson. While he is recovering from last year’s torn ACL, Robinson, as well as Taylor Gabriel, are listed as the starters on the team’s depth chart. Now, you would never know from practice, as many of the WRs listed here are getting time with QB Mitchell Trubisky. Gabriel, in particular, is showing his versatility by making short, intermediate and long catches both along the sideline and over the middle. Neither Gabriel nor Robinson have played in the Bears’ two preseason games so far. That signifies to me that the coaching staff is content with those two as the presumed week 1 starters and they are looking to evaluate the players behind them.

In the Hall of Fame Game, it was Josh Bellamy and Bennie Fowler who were playing in the Bears first offensive series. While in the most recent preseason game, it was Anthony Miller and Kevin White who started the opening drive when Trubisky was on the field. That is not surprising to see, as the Bears invested serious draft capital in White and Miller with a first and second-round draft pick respectively. Meanwhile, Javon Wims was a seventh-round pick while Tanner Gentry went undrafted, as did Bellamy and Fowler.

The top four WRs are likely accounted for by Robinson, Gabriel, Miller and White.

The Detroit Lions have not had a 100-yard runner in a game since 2013. To that extent, signing LeGarrette Blount was very important for the Lions. Head Coach Matt Patricia was the Patriots Defensive Coordinator when Blount ran for 1,161 yards and 18 TDs with New England. He knows first hand what Blount is capable of and he’s seen a large portion of the first-team reps in camp. Apparently, Blount has been most impressive in pass-protection, and excelling in that capacity would allow him to be on the field in passing situations.

We know that Theo Riddick is an excellent pass catcher. However, the emergence of rookie Kerryon Johnson could eat into Riddick’s role. Johnson has been lining up on the outside and has made catches down the sideline in camp. The Lions might find a way to put two RBs on the field at the same time. That would most likely put Johnson out wide while either Blount or Riddick is used in pass-pro or as a receiving option out of the backfield.

All of this spells bad news for Ameer Abdullah. Amid constant trade rumors, Abdullah is doing everything he can to make the team. This included fielding both kickoffs and punts. The coaches were impressed enough to have Abdullah split most of the first half carries, of the team’s preseason opener, with Blount. Abdullah even got a goal-line carry and rewarded the Lions with a TD. It is important to note that Riddick did not play in this game and his presence may have changed things.

From what I can gather, it would surprise me if a running back other than Blount led the Lions in rushing attempts. He seems likely to have most of the goal-line carries in 2018. Johnson and Riddick meanwhile, will split receiving opportunities, leaving Abdullah without a prominent role in the offense. However, Abdullah should make the team because of his services on special teams. While it is muddled, Blount is probably the RB to target in non-PPR (point per reception) formats. Take your guess when catches are counted.

Marvin Jones and Golden Tate have the starting WR spots locked down. Tate is quite adept at playing in the slot, so who will take the other outside spot in three WR sets? From this list of names, most fantasy players would probably guess 2017 third-round pick, Kenny Golladay. They would probably be correct, as Golladay is getting a large amount of first-team reps in practice. Both he and T.J. Jones were targeted by Matt Cassel (the de facto starter with Matthew Stafford sitting) in the second drive of the Lions preseason debut. Golladay’s ability to high-point the football will certainly work in his favor versus T.J. Jones, who is four inches shorter.

As for Jace Billingsley, his best chance to make the roster is through his versatility. He has done some running out of the backfield in camp. Marquez Bradley has been banged up, but he was able to suit up for the first preseason game, where he and  Billingsley were both targeted. Billingsley came down with both targets, while Bradley did not make a catch. If the final WR spot comes down to these two, I think Billingsley has the edge right now.

Currently, the Lions TE depth chart has Luke Wilson as the starter, Michael Roberts with second-stringers, and Levine Toilolo with the third team. There has not been much out of camp to suggest that this will change anytime soon. Wilson has done well, most notably securing a deep pass to set up a field goal during a two-minute drill. I would invest in Wilson at this point even though it is tempting to take a flier on the 6’8″ Toilolo.

Mike McCarthy has spoken the words that are most despised in fantasy football… running back by committee. Unlike other training camp battles, there probably will not be a clear winner among the Packers backfield.

For fantasy purposes, Green Bay offers up an excellent opportunity. All three RBs are being taken around the same spot in the fantasy drafts this year. When choosing how to invest in the backfield, fantasy owners have three different types of players to choose from. As a former WR, Ty Montgomery is obviously quite adept at catching the ball. While Jamaal Williams also proved capable of that in 2017, I believe that Montgomery will see the majority of backfield targets when both are healthy. In PPR formats, Montgomery is the Packers RB that I would target.

As I mentioned, Williams can fill out the pass-catching role of an RB. He was also the healthiest RB for the Packers in 2017, proving that he could handle the biggest workload. Williams will probably see a healthy amount of touches during Aaron Jones’ two-game suspension to start the season. He strikes me as the type of RB that McCarthy wants as a lead back. I would target Williams in fantasy drafts, where my early picks are boom-or-bust and I am looking for a solid production floor later.

That leaves Aaron Jones to discuss. Last season, Jones trailed only Offensive Rookie of the Year Alvin Kamara in explosive run percentage. According to this article, an explosive rushing attempt is one that goes for at least 15 yards. What that tells us is that Jones does not need a lot of touches to put up a decent production. If the Packers do run a true committee, Jones is the RB who can capitalize on the few touches he will receive. If my early fantasy picks were players with high floors, I would target Jones as a later upside play.

In an offense as potent as the Packers are projected to produce, the third WR can have fantasy value. Looking at the Packers depth chart, that player is most likely Geronimo Allison. Allison has had experience and success on the field with Rodgers before, and athleticism and lanky frame could be useful as the third guy. Along with DeAngelo Yancey, Allison was playing on the opening drive for the Packers preseason premiere. Trevor Davis, on the other hand, is solely a special teams player, and he is also banged up. If he doesn’t get healthy soon, he could become expendable, especially if players like Ty Montgomery or Marquez Valdes-Scantling are given return reps.

However, even with all of these WRs on the team, the Packers still felt the need to draft three WRs in 2018. All three played in that first preseason game, with Marquez Valdes-Scantling arguably the most impressive. He caught 5 of his 7 targets for 101 yards and 1 TD. He also fielded three kickoffs with a longest return of 24 yards. J’Mon Moore, unlike Valdes-Scantling, is actually listed on the Special Teams depth chart as a third-team kick returner. Perhaps that will change after Valdes-Scantling did well on return duty. Equanimeous St. Brown has enormous talent and fell much further in the draft than most expected. Given his decent performance in the first preseason game, his success in practice and his ginormous upside, he is virtually a lock to make this team.

The final man to talk about is Jake Kumerow, who has arguably been the best out of this group. Kumerow was undrafted out of UW-Whitewater back in 2015, and has since spent time on the practice squads of the Bengals, Patriots and Packers. While many of the young guys have been called out by Rodgers recently, Kumerow has seemed to only impress. He caught three passes for 76 yards and touchdown in the first preseason game. While the talent is there to make the roster, the Packers have a lot invested in the other receivers, making Kumerow’s roster battle a difficult one.

If you are taking a late round flier on a Packers wide receiver, Allison is probably the best bet.

The Minnesota Vikings have WRs on their roster who could not be more opposite. There are two former first-round picks in the form of Laquon Treadwell and Kendall Wright. They also have a seventh-round pick with Stacy Coley, as well as Brandon Zylstra, a WR who played in the CFL (Canadian Football League) last season. As a fan of the CFL, I am familiar with Zylstra and I am excited to see what he will do in the NFL. He broke out in the CFL last year, with 100 catches for 1,687 yards a 5TDs in 16 games. Zylstra does well as a deep threat who also offers some versatility.

So far in training camp, all four of the players mentioned have had time to work with Vikings QB Kirk Cousins. However, none of them played with Cousins on the opening drive of the first preseason game. Perhaps special teams contributions are what is needed for these players to make a splash. Coley is listed as a reserve kickoff and punt returner. Zylstra, meanwhile, is learning to operate as the holder on place kicks.

Treadwell and Wright both offer a high draft pedigree, which makes them the most likely candidates for the WR3 job. This is one of many training camp battles that is far from over.