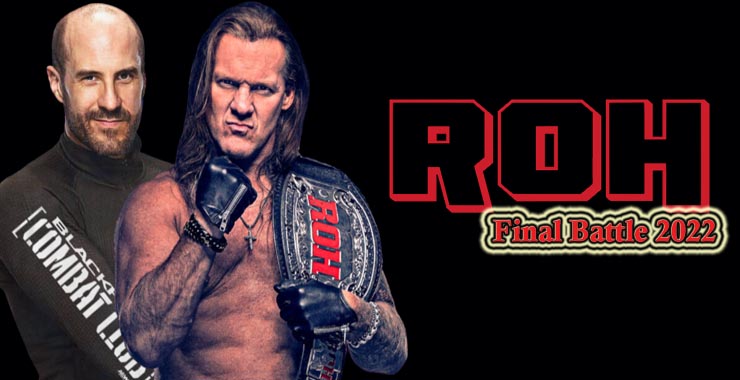 The Ring of honor in collaboration with All-Elite Wrestling brings you the feistiest pro-wrestling card live from the College Park Center in Arlington, Texas on Saturday, December 10. The main event will see the current ROH World Champion Chris Jericho defending his title against the former champion, Claudio Castagnoli. The two have a fair bit of history between them as Jericho came away with a victory at Dynamite Grand Slam on September 21st with some cheap tactics.

Castagnoli was left fuming as he was denied the opportunity to get the strap wrapped around his waist. He will be hoping that it will be a fair outing this time around and he punches his way to get that belt that he has been longing for so long. This will not be the only title match of the evening as there are five more titles up for grabs. Samoa Joe will put his ROH TV Title against the promotion newcomer Juice Robinson. While in the women’s category, Mercedes Martinez will be lining up Athena for the ROH Women’s Title.

The ROH Final Battle has everything one could wish for as the star-studded lineup is ready to showcase their talents. They are ready. Are you?

Here is what you need to know about the ROH Final Battle 2022, the biggest pro-wrestling event to close out the year.

The pro-wrestling fans in the states can order the ROH Final Battle on InDemand and Bleacher Report. While Canadian wrestling enthusiasts will have to be contented to watch all the events live on Bleacher Report and FITE. Final Battle is available for viewing through OolaTV in the Anywhere (one time payment)

ROH Final Battle is scheduled to take place at the College Park Center in Arlington, Texas on Saturday, December 10. The gates will open at 2:00 PM ET with the main card starting at 4 p.m. ET / 9 p.m. GMT.. Fans can buy the PPV online from OolaTV. The fight card costs $29.99 with 48 hours of replay availability.