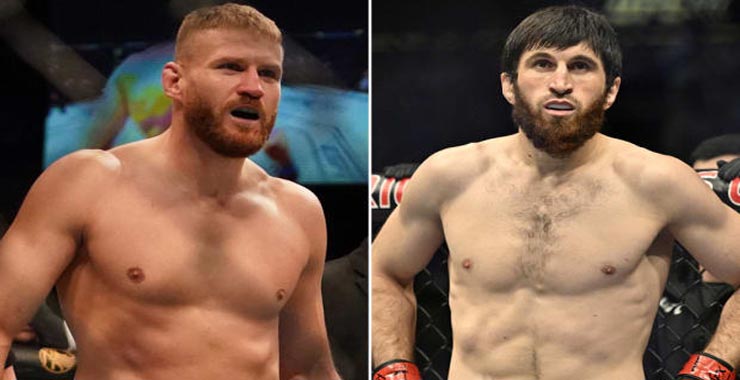 The world’s premier MMA organization UFC will have the final PPV go down on Saturday, December 10 at T-Mobile Arena in Las Vegas, Nevada. The main event will feature the former champ, Jan Blachowicz going up against Magomed Ankalaev for the vacant light heavyweight title. It was originally Jiri Procházka who was scheduled to headline the event against veteran, Glover Teixeira but an injury resulted in him being forced out of the event. Blaochowicz and Anklaev were due to face in the co-main event but to their fortune, the fight has now been lifted to the main card.

Blachowics won the same championship back in 2020. He retained his title only once before losing out to Glover Teixeira in October 2021. Now he has another chance to make up for his shortcomings and get his hand raised once again on Saturday. But the Russian Ankalaev will have other ideas stored for him as the heavy-hitting southpaw is oozing with confidence and is itching to get in the octagon to win his maiden title in the promotion.

In the co-main event of the evening, Paddy ‘The Baddy’ Pimblett will meet Jared Gordon in a lightweight bout. Pimblett has been on an absolute roll ever since stepping into the octagon. He is surely one of the fan favourites as his charismatic personality uplifts the whole mood inside the arena. He has been undefeated in all his three outings with each one of them ending before the final bell. Paddy is tipped to be the next biggest star originating from Britain. But he will have his work cut out as he will be facing a tougher challenge in Jared Gordon. Will Gordon put an end to this hype train or will Paddy continue on his mary way?

Here is all you need to know about UFC 282 including the fight card, TV channels and more.

The final PPV of the year is just about to begin and you should not be missing this one. You can watch the whole PPV on ESPN+ if you are living in the U.S. It will cost you a pay-per-view fee of $75 to go along with an ESPN+ subscription which comes at $10 per month. The fans in the UK can watch their favourite stars, Paddy Pimblett and Darren Till on BT Sports. You can watch the action on the BT sport channel as well as on their app. You can get access to this by paying just 25 pounds per month. To learn more about the live telecast of UFC 282, one can visit the Via platforms OolaTV ($29.99)

The main card is set to get underway at 10 p.m. ET / 3 a.m. GMT with the main event cagewalks scheduled for 1 a.m. ET / 6 a.m. ET.  The prelims are on TSN and RDS. Early Prelims, Prelims and UFC 282’s main card is available on various providers OolaTV.