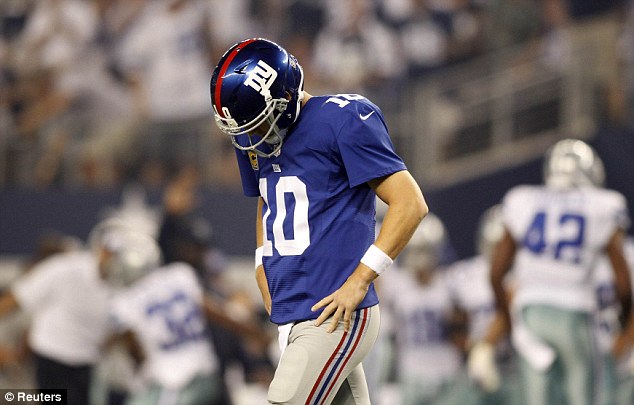 Coming into the season, the New York Giants had very high expectations. Their 2016 campaign ended after a devastating loss to the Green Bay Packers in the playoffs, and after returning nearly every player from the defense and addressing some of their most needed areas of improvement on the offensive side of the ball, fans thought this could be a great year. Unfortunately for Giants fans, this is not the case.

The Giants have started the year with an atrocious 0-5 record and remain as one of just the three teams without a win this season. The root of their problems, according to most, is the abysmal offensive line play they’ve had each and every game this year. Pro Football Focus puts the G-Men as the 24th ranked offensive line in the league, which in my opinion is fairly generous given that they have allowed the fourth-most sacks in the league thus far. The Giants also have to go every game dealing with Ereck Flowers, who is turning out to be one of the bigger busts for them in recent history.

Before last week, one of the few bright spots of this team was the wide receiver position. With the likes of star receiver Odell Beckham Jr., the veteran Brandon Marshall, and the exciting young stud Sterling Shepard, the Giants had little to worry about coming from their pass catchers. In their 27-22 home loss to the Chargers last week, all three of these players got hurt, leaving OBJ and Marshall out for the season and Sterling Shepard out indefinitely. As if losing their three best wide-outs wasn’t enough, Dwayne Harris, who has been returning punts all year for the Giants, has been put on the IR and will receive season-ending surgery as well.

The next major area of concern is the Giants backfield. With injuries and inconsistent performance, the Giants find themselves ranked 30th in the league in rush yards per game. Paul Perkins started the year as the lead tail back, yet he failed to record over 22 rush yards in any of his four starts this season; that is just not going to cut it in the NFL. Since his injury, Orleans Darkwa has emerged as the most impressive running back on the Giants roster, after posting 69 yards and a touchdown on just nine carries in their last game against the Chargers. Despite his success in a small sample size, I would not expect the overall run game to get any better this year behind that porous offensive line.

Last year, the Giants secondary was one of the best units in football. Although this year they haven’t been terrible, Dominique Rodgers-Cromartie has single-handedly put an end to this, at least for the foreseeable future. DRC ranks as one of the best cornerbacks in the league, but after acting up in practice and getting into some kind of verbal altercation with coach Ben McAdoo, he finds himself suspended indefinitely.

The defensive line and run-stopping unit have been arguably the most disappointing part of this team, as they have just been obliterated by the run this season. The giants have allowed the fourth-most yards per game on the ground in the NFL, which is quite surprising given they have the likes of Jason Pierre-Paul, Damon Harrison, and Olivier Vernon on their defensive line. We can chalk some of this up to game flow and the offense not moving the ball, but does not completely take away the struggles this defensive front has shown.

With all of the injuries, inconsistencies and poor performances, it is not so far-fetched to predict that the Giants will end the season with the top pick in the draft and the worst record in the league.