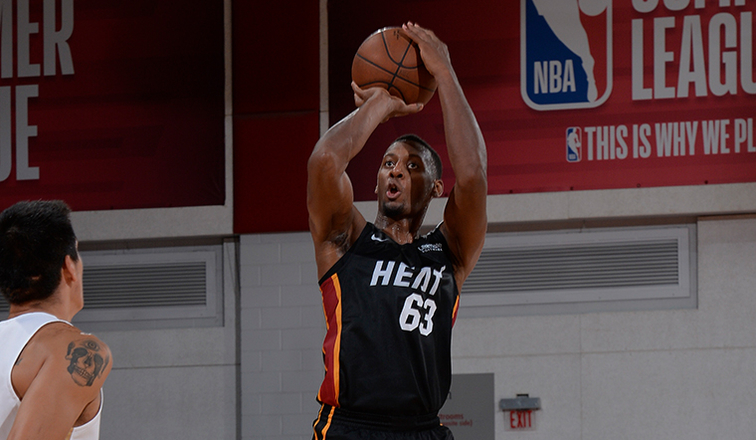 The Vegas Summer League playoffs officially began Wednesday afternoon. The teams now have something other than an NBA contract to play for. And for many of the players participating, it will be the last time to perform on a national stage. The Miami Heat and New Orleans Pelicans met up in round one.

Jarrod Jones Too Much for Pels’

The Miami Heat decided they had seen enough from second year big man Bam Adebayo this summer and elected to sit him for the playoffs. Fifth year pro out of Ball State, Jarrod Jones, took that move as an opportunity to show NBA GM’s his craft. Jones dominated the game at both ends of the floor, scoring 31 points on 13-of 20 shooting. He also totaled eight rebounds and four assists, but the stat sheet doesn’t always provide the full story. Sorry, analytic freaks. Jones used all of his 6’9′ frame to protect his paint, contesting every shot and tipping passes that came his way.

Jones went undrafted in 2012 and has only played for the NBA during the Summer League. After playing in Hungary, France, Italy and Turkey in a span of five years, Jones hopes to build off his sound performance and earn an NBA contract.

The summer is officially over for the New Orleans Pelicans following their loss to the Miami Heat, which means the wait for Cheick Diallo is also over. I previously wrote about the comparison, or lack there of, between Diallo and Pelicans superstar Anthony Davis, but the rookie has continued to show otherwise. Watching the fluidity of Diallo was something special. There was very little wasted motion, he scored at will, consistently hit free throws, and protected the rim. Diallo did everything and more than was expected from him, finishing off his summer with 28 points and 13 rebounds performance. Not bad for someone who averaged just three points during his lone year at Kansas.