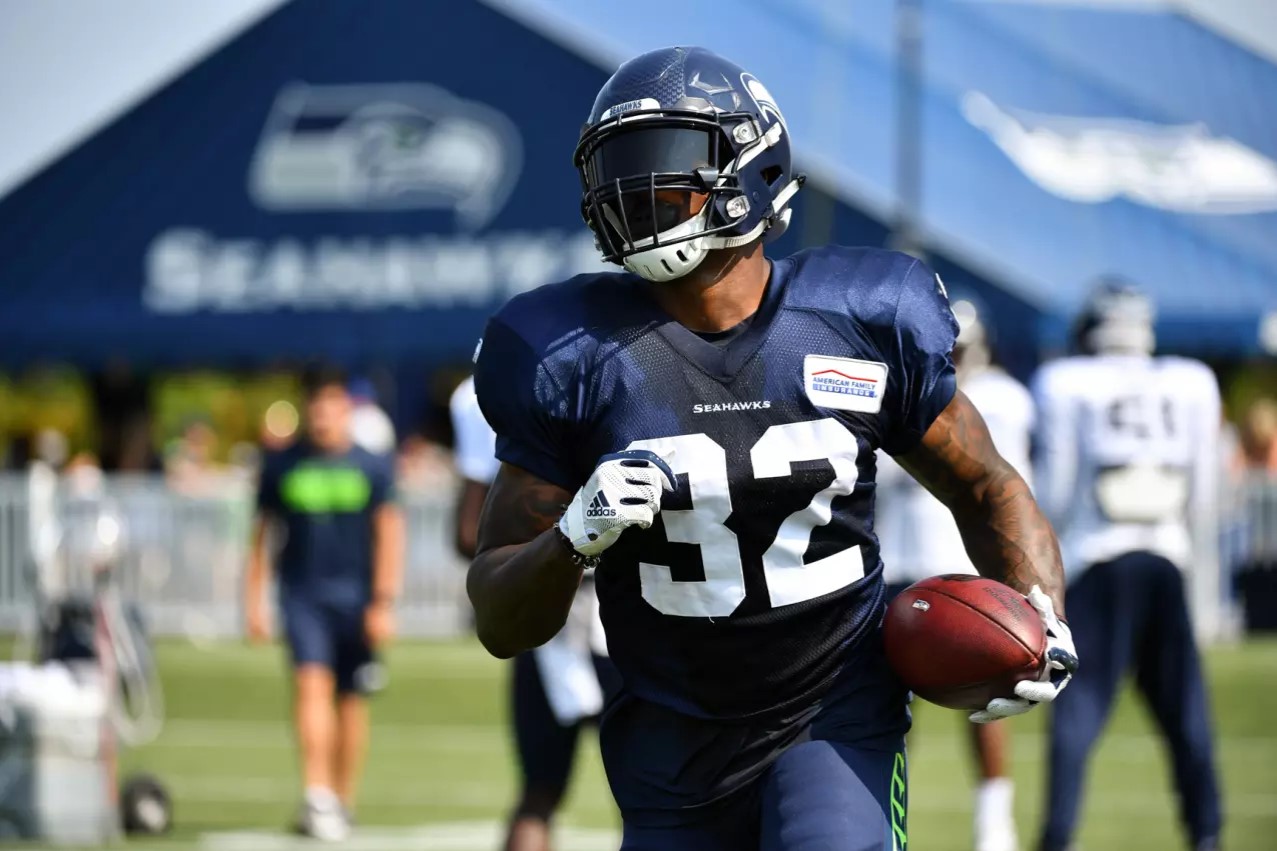 Using reports to analyze the NFC West training camp battles and attempt to give insight for the 2018 fantasy football season.

This time of year, fantasy football owners are preparing their draft boards and tiers. While the top backs and targets for NFL teams are almost all solidified, there are plenty of roles that are up for grabs. These are the fantasy-relevant training camp battles for the NFC West. In this series, I am omitting players who are obvious starters; players like David Johnson, Todd Gurley, Jimmy Garoppolo and Doug Baldwin.

The Arizona Cardinals have arguably the most extreme QB makeover in 2018. All four of the QBs in training camp are new to the team. However, there are clearly only two combatants in the race to be the week 1 starter. Rookie Josh Rosen has played well enough to render everyone but Sam Bradford expendable. Initially, Rosen had challenges with the playbook, but as camp has gone on, he has gotten more comfortable.

In the days leading up to the Cardinals first preseason game, Rosen got most snaps on offense so that he would be ready for the game. He played the second drive with mostly backups. The backup o-line struggled, which did not allow Rosen to get a rhythm. In the second preseason game, however, Rosen looked much better when he was on the field with the Cardinals starters.

Regardless of who the QB is, the Cardinals offense will flow primarily through two players: WR Larry Fitzgerald and RB David Johnson. However, there are potentially productive fantasy opportunities for these other receivers. The leaders among them are youngsters with draft capital; Christian Kirk (second round, 2018) and Chad Williams (third round, 2017). Even as a second-year player, Williams got the same veteran treatment as Fitzgerald and Johnson; he did not play in the team’s third preseason game. This says that the Cardinals are comfortable with him as a starter and they want to use the preseason to evaluate other players.

One of those players that benefited the most was J.J. Nelson. While only Fitzgerald and Kirk are locks to make the final team, Nelson’s speed certainly gives this team a field-stretching dimension that few others on the team can bring. He has also been working on his shorter routes. While Nelson has had a good camp, free agent acquisition Brice Butler has arguably been a disappointment. He is listed as the starter on the Cardinals depth chart, yet Butler has missed time with a foot injury. He did manage to play in the third preseason game, but not with Bradford. The other notable free agent, Greg Little, has impressed in camp, but is unlikely to contribute much to fantasy football, even if he makes the team.

At this point, other than Fitzgerald, it appears that Williams is the only Cardinals WR that offers value on a week to week basis.  Kirk has been getting work with both QBs and as a kickoff and punt returner. He and Nelson will probably get big plays now and again, but it will be difficult to determine when.

For the Rams, the top four receiving options are set. RB Todd Gurley, as well as WRs Brandin Cooks, Cooper Kupp and Robert Woods, will all get a large share of targets. That leaves the TEs fighting for scraps, but if one of these players can assert himself over the others, it may be enough to become fantasy-relevant. The problem last year for Gerald Everett and Tyler Higbee was that they both got playing time, which limited their respective targets (32 and 45).

Everett suffered a shoulder injury in camp, and that may open the door for Higbee to receive more targets. The coaching staff appears to have Higbee as an unquestioned starter. Much like the established players (Cooks, Gurley, Kupp and Woods), Higbee has not played in the preseason. He may see a larger workload at the start of the year when Everett is still recovering. Higbee seems like a great player to take a late-round flier on and trade him in-season after an explosive performance. Temmarick Hemingway has not dominated opponents with these extra opportunities, but he and Evertt could still eat into Higbee workload later in the season.

At the start of training camp, the 49ers RB group appeared to be very deep. That is being tested now, with several injured players, including presumed starter Jerick McKinnon. Fortunately for him, it was only a calf strain and he is expected to return in time for the regular season.

The two players most believed would compliment McKinnon have also been dealing with injuries. Matt Breida and Joe Williams’ absences opened the door for San Francisco to sign veteran Alfred Morris. While he did not play in the preseason game three days after signing, Morris was on the opening drive of the third exhibition contest. Morris looked great in his 49ers debut, but he and Raheem Mostert split time in the early going. Mostert did not get a carry, instead, he was targeted by QB Jimmy Garoppolo. He is adept at catching the football, and that is important for an RB in a Kyle Shanahan offense.

Kyle Juszczyk is also an excellent pass catcher, and as a fullback, he has a roster spot locked up. Juszczyk offers versatility as a blocker, runner and receiver, and he was even used in the two-minute drill during the third preseason game when Garoppolo was still in at QB. Juszcyk might be the answer to the team’s short-yardage complement to McKinnon. It probably won’t be Jeremy McNichols who, a few days after getting a lot of first-team reps, was relegated to a backup role with the arrival of Morris. The only two RBs that will be on the roster for certain are Juszcyk and McKinnon. While McKinnon is going early in drafts, Juszcyk is essentially free and may hold value on fantasy rosters.

As a mid-season addition to the team, QB Garoppolo found some chemistry with players such as Marquise Goodwin and Trent Taylor. Now, Garoppolo will be given an entire offseason to work with his receivers. In 2017, he showed he liked to target TEs Garrett Celek and George Kittle. Still, it was Goodwin who was the team’s leading receiver with Garoppolo, and he caught almost a quarter of Jimmy G’s completions.

It is difficult to assume that Goodwin will regain his status as the unquestioned leading receiver. Pierre Garçon suffered a season-ending injury before the Garoppolo trade and Dante Pettis was drafted in the second round this year. Both have made impressive plays in training camp, but they are on opposite ends of the depth chart. Garçon is listed as a starter along with Goodwin, while Pettis is on the third-team offense. Pettis, however, is listed as the second-string punt returner, a role that will allow him to use his speed. Pettis can also play in the slot, which may help him get on the field more often this season.

While Aaron Burbridge and Aldrick Robinson are working with Garoppolo, it is Goodwin who is showing the most chemistry with the QB, especially on deep passes. Garçon, and to an extent slot WR Trent Taylor, will probably get a lot of work underneath, but it seems that Goodwin has Garoppolo’s trust more than others. The nature of those long throws means that Goodwin has a better chance to rack up yards than Garçon. I prefer someone like that in non-PPR (0 points per reception) formats where yards and TDs are all that count. However, I have Garçon higher in PPR (1 point per reception) settings.

The two players predicted to lead the Seahawks backfield do not much in common. Both can run and catch well, but Chris Carson was a seventh-round pick last year, while Rashaad Penny was a first-round selection in this season’s draft. As we have seen with Seattle before, draft capital and financial investments do not matter. While many were expecting Penny to be the top dog, it is Carson who was on the opening drive of all three preseason games. Certainly Penny’s broken finger has limited his usage, but Carson was ahead before that injury. While it is not out of the question that Penny surpasses him at some point in 2018, Carson is the starter for now.

The other backs offer some interesting options as well. Mike Davis has the closest skill set to Carson, and he’s a good runner with some receiving upside. Until Penny is fully back, Davis is the likeliest to take over for a Carson injury. J.D. McKissic and C.J. Prosise have a lot in common, besides their affinity for abbreviations. Both are arguably better receivers than runners. McKissic has the added advantage of working as a kickoff and punt returner. He looked good until he suffered a foot fracture. Prosise saw the field in the first half of the Seahawks third preseason game. He was even targeted by QB Russell Wilson. Prosise will have to excel in the passing game in order to guarantee a spot on the team.

Perhaps all five of these players will make the final roster, especially if McKissic transitions to a WR, as was a rumor. Even so, with a poor o-line, this is not a backfield that I want to invest too heavily into. Carson and perhaps Penny will see a large share of carries. It is only those two that I would target in fantasy drafts.

Top receiver Doug Baldwin is dealing with a knee injury which may limit him in 2018. Couple that with the departures of TE Jimmy Graham and WR Paul Richardson, and there may be an abundance of targets available this season. Funny that suddenly Tyler Lockett is one of the seasoned veterans on this team, and he has a chance to be the second option in the passing game. Although he has not been able to match the eight touchdowns he scored in his rookie season, Lockett has the potential to do that this year as a first-team receiver and returner on the depth chart.

Outside of Lockett, there are several new faces competing for a starting role with the Seahawks. While Brandon Marshall is the most notable name, it is Jaron Brown who is listed as a starter opposite Lockett (at least while Baldwin is out). So far, Brown is the only WR to be targeted by Wilson in all three preseason games. Marshall brings a veteran presence to this young receiving corps, but he also provides a large red-zone target, which makes him an interesting option in non-PPR leagues.

Amara Darboh and David Moore have been making impressive catches in camp. Both will probably make the team, especially if Moore can get regular work as a return man. However, for fantasy purposes, I would trust Brown or Lockett more as late round fliers.