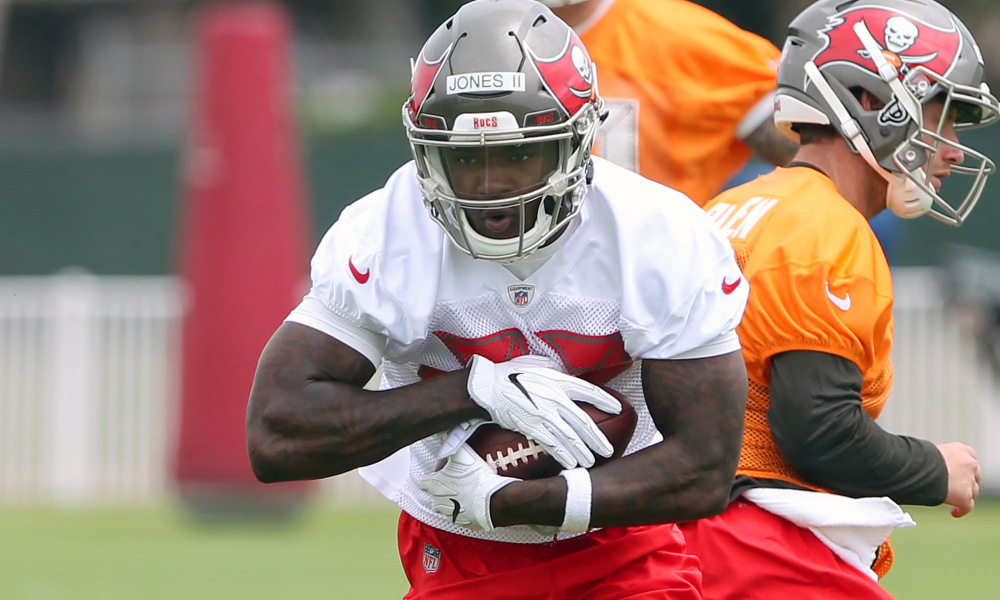 This time of year, fantasy football owners are preparing their draft boards and tiers. While the top backs and targets for NFL teams are almost all solidified, there are plenty of roles that are up for grabs. These are the fantasy-relevant training camp battles for the AFC South. In this series, I am omitting players who are obvious starters; players like Matt Ryan, Greg Olson, Alvin Karama and Mike Evans.

The Atlanta Falcons present an interesting case. Most, if not all, of the starting spots on offense are accounted for. There are not any training camp battles of note for this team. QB Matt Ryan is fully entrenched as the starter. Both RBs, Devonta Freeman and Tevin Coleman, are established and their roles are secure.

If there are any questions as to offensive roles, they lie with the receivers. We know that Julio Jones will continue to be a vital cog for this team. Ryan will look Jones’ way more often than not, and we can probably expect more than the three TDs that they connected on in 2017. The secondary passing options are Mohamed Sanu, rookie Calvin Ridley and TE Austin Hooper. The Falcons have the advantage of three WRs who can move all around the formation, with the most likely scenario being Sanu in the slot, with Jones and Ridley outside.

The wild card of the offense is Hooper, who has been given many opportunities to produce, but is widely inconsistent. His real competition at TE is nine-year veteran Logan Paulson, who has never topped 28 receptions in a season. This is the year where Hooper has to put it all together or we may see a TE training camp battle in 2019.

Over the last two seasons, the Panthers have remade their receiving corps. That includes investing highly in the NFL Draft with Curtis Samuel (2nd round, 2017)  and D.J. Moore (1st round, 2018). The team also signed Torrey Smith and Jarius Wright to compliment their leading WR from last season, Devin Funchess.

Funchess tied for the team lead in targets (113) with RB Christian McCaffery. This was, of course, a season where TE Greg Olson missed the majority of the campaign due to injury. With the latter’s return and the new WRs in town, I do not believe that Funchess will see that type of target share in 2018.

For his part, Funchess is listed as a starter, along with Torrey Smith, on the team’s depth chart. Smith offers QB Cam Newton a similar skill set to former Panther Ted Ginn, with whom Newton had success. The only other WR who is getting extensive work with QB Cam Newton is the rookie, Moore. I am sure the Panthers will design plays for Samuel (like running sweeps that he ran at times last season) and he will get a chance to contribute on special teams, along with Wright. However, for now, fantasy owners should only concern themselves with Funchess, Moore and Smith at WR.

Ted Ginn was mentioned in the last section, as he went from one NFC South team to another. He joined the Saints last season and was second among their WRs in targets, receptions, yards and TDs (all behind Michael Thomas). He will likely reprise his role, as he showed chemistry with QB Drew Brees and he is listed on the 1st-team offense according to the Saints’ depth chart.

Ginn’s main competition for targets may come in the form of two new additions to the team, former Chicago Bear Cameron Meredith and 3rd-round rookie Tre’Quan Smith. In all likelihood, neither will take away from Ginn’s role as a deep threat. Meredith and Smith should be competing for the starting slot WR spot, or possibly an outside spot when they decide to move Thomas inside. Meredith has been getting 1st-team looks in training camp, but he has also missed some time recovering from 2017’s season-ending knee injury.

During the first preseason game, Smith made a nice first impression by getting the longest catch for the offense (25 yards). Brandon Tate also got off on the right foot with two long kick returns. He will probably not contribute too much on offense in 2018, but he should make the final roster due to his special teams contributions. Michael Floyd, however, may have an uphill battle to make the team. For now, only Ginn, Meredith and Smith are worth mid-to-late picks in fantasy football drafts.


Rookie Ronald Jones impressed many people with his explosive playing style. The coaching staff of the Tampa Bay Buccaneers is not quite as enthusiastic, at least not right now. Jones currently sits 3rd on the RB depth chart behind Payton Barber and Jacquizz Rodgers. One aspect that the Buccaneers coaching staff has emphasized in training camp is having their RBs work in the passing game. Even in college, Jones did not catch very many passes, so he is behind the 8-ball when compared to Barber, Rodger and especially Charles Sims.

Speaking of Sims, even with his pass-catching prowess, he is at risk of cut by the team. Undrafted rookies Dare Ogunbowale and Shaun Wilson have impressed to the point where Sims may be expendable. Wilson will not, however, be a serious competitor for the starting RB role. That will most likely belong to Barber for most of the season. Barber has gotten the start in both of Tampa Bay’s preseason games. Jones has come on to the field for the 3rd and 4th drives during these contest. That has actually given him the advantage of playing with QB Jameis Winston who, in light of his three-game suspension, has been with the 2nd-string offense. Perhaps, if/when Winston regains his starter status, Jones can use that little bit of chemistry to get more playing time. For now, Barber is the Bucs back to bank on for 2018.

We all know that Mike Evans is the #1 target for the Buccaneers, regardless of who is behind center. We also know that both TEs, Cameron Brate and O.J. Howard, will get a decent share of targets as well. The #2 and even #3 WR spots can still be valuable. Adams Humphries and DeSean Jackson demonstrated that last year, with 61 and 50 receptions respectively.

One aspect that Jackson has been working on are shorter catches, such as quick slants. It appears that the Buccaneers are trying to put him in better positions to succeed. I have heard rumors of his demise lately during the offseason, but I believe that those are exaggerated. People seem to want Chris Godwin to establish himself, but for 2018, Jackson is still probably going to be the #2 target. There is talk, however, of moving Jackson to the slot and allowing Godwin to line up on the outside. If that is the case during the regular season, Godwin may see a boost in targets and become the team’s #3 WR.