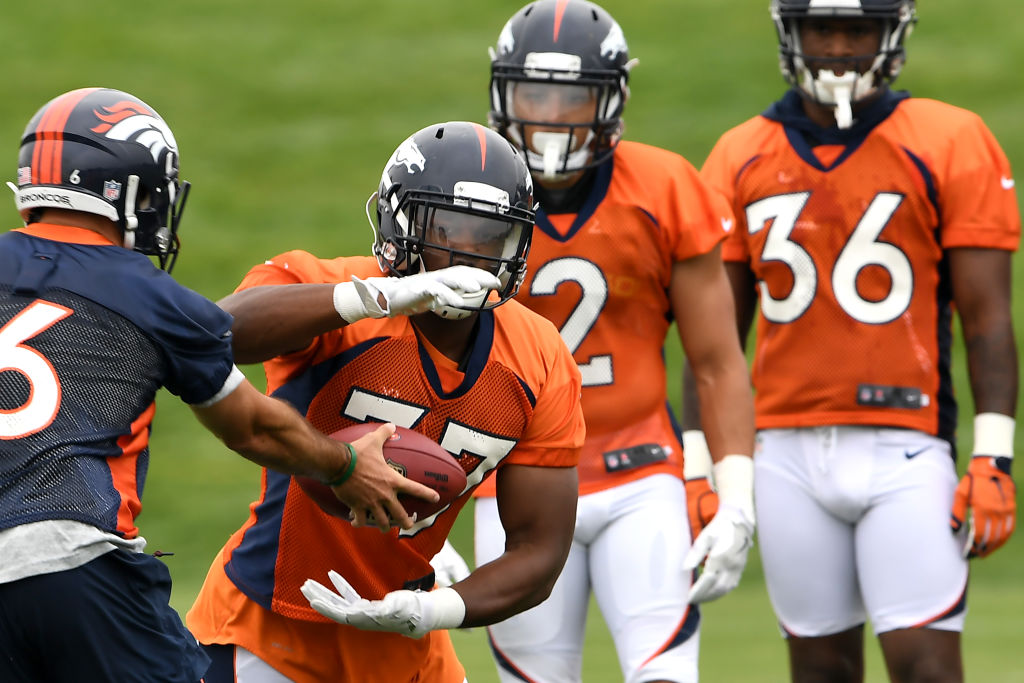 This time of year, fantasy football owners are preparing their draft boards and tiers. While the top backs and targets for NFL teams are almost all solidified, there are plenty of roles that are up for grabs. These are the fantasy-relevant training camp battles for the AFC West. In this series, I am omitting players who are obvious starters; players like Demaryius Thomas, Travis Kelce, Melvin Gordon and Derek Carr.


This may be one of the most important training camp battles in the NFL. A starting RB role is on the line, and that is huge for fantasy owners. While most would argue that Royce Freeman is the more talented running back, the Broncos still have Devaontae Booker listed as the starter on their depth chart. In their third preseason game, both Booker and Freeman got carries on the opening drive. I believe that eventually, maybe even this season, Freeman will get the majority of carries for the backfield. Even though he is not the starter right now, Freeman should still be drafted in the range of probable starters in fantasy.

De’Angelo Henderson and Philip Lindsay represent the depth that Denver does have in the backfield. Lindsay has seemed to surprisingly surpass Henderson, as the former worked in rotation with the first-team offense in the all-important third preseason game. Both will probably make the team, but neither will have much fantasy value while Booker and Freeman are still there.

The battle for Broncos third WR has been back and forth between two rookies. At first, it appeared that DaeSean Hamilton was destined for the starting slot receiver role in the offense. However, with Courtland Sutton performing as well as he has in the preseason, there appears to be a shift in the Broncs 3WR set. While Hamilton will be in the mix for targets this year, it now seems like the starting 3WR iteration of the team has Emmanuel Sanders moving inside with Sutton on the outside.

River Cracraft and Tim Patrick are listed on the third-team offense, which is why they are included here. Cracraft will have a chance to compete as a kickoff and punt returner throughout the season, but ultimately, neither player will make much fantasy impact in 2018. Even Hamilton and Sutton are lower on the pecking order than incumbent starters Sanders and Demaryius Thomas.

Over the past couple of seasons, a position that has not been overly productive in for fantasy purposes has been Broncos tight ends. There is certainly an influx of talent in 2018, with first-year players Jake Butt and Troy Fumagalli arriving in Denver. Butt was actually drafted in 2017, but missed all of last year with a knee injury sustained late in his final college season. Still, in order to warrant any fantasy investment, both players will have to move up on the depth chart.

The current starting TE is Jeff Heuerman. He has been listed on the first-team offense all of training camp and has been playing with QB Case Keenum during the preseason games. With Austin Taylor a long shot to make the team and both Butt and Fumagalli learning to play in the NFL, there is a massive opportunity for Heuerman. Fantasy owners who like to grab TEs really late can look to Heuerman as a  backup or streaming option during 2018.

We know that the top two wide receiver spots in Kansas City are accounted for. Tyreek Hill and Sammy Watkins, along with tight end Travis Kelce, will probably see a large portion of the target share. After the running backs get their targets, there is probably enough for the third WR to be viable only during bye weeks.

Chiefs writer Braden Holecek, projected what receivers will make the final 53 man roster. Therefore, we shall consider those receivers, the most prominent among them being Chris Conley and Demarcus Robinson. Both players are listed on the second-team offense on the depth chart. Conley and Robinson have worked with Patrick Mahomes during training camp as well the all-important third preseason game. It was Conley who was targeted by Mahomes on the opening drive of that game. That indicates that he will most likely get the first shot at contributing to the offense during the season.

De’Anthony Thomas plays a very important role for the Chiefs; it just might not be a productive one for fantasy football purposes. He is listed as the starting kickoff returner and the second-string punt returner, according to the team’s depth chart. While he will occasionally play on offense, Thomas can be ignored in most fantasy leagues.

On the lower end of the depth chart, we find Jehu Chesson and Byron Pringle. Pringle was considered a long shot to make the roster. However, it appears that he is making impressive catch after impressive catch in camp. Chesson has also performed well in certain high-leverage training camp situations, such as goal-line drills. While they will probably make the team, the offensive contributions of Chesson and Pringle will be too sporadic. I would focus my attention on Conley and Robinson.

This may be another one of those training camp battles that is already settled. Virgil Green is listed atop the Chargers TE depth chart. He has spent extensive time with QB Philip Rivers and the first-team offense during training camp. Although he did not see a target during the team’s third preseason game, Green was targeted twice (once by Rivers) in the previous contest.

The only other “TE” that may contribute as significantly as Green is actually a fullback: Derek Watt. It is not uncommon for NFL teams to go without a fullback on their roster. Whenever those teams need one on the filed, they will send out a TE lined up in the backfield. We are witnessing an era in which both positions have some crossover in terms of roles. Fullbacks need to be able to run-block, pass-protect, run the ball as well as catch passes. Unfortunately, Watt is listed as an RB, or FB, on most fantasy football websites. Therefore, he is fantasy irrelevant since there is more depth at that position. As a TE, he would certainly be an interesting waiver wire pick-up.

Deeper on the tight end depth chart, there are players who have been impressive in training camp. Sean Culkin, a UDFA from 2017, is in the good books of the Chargers coaching staff due to his blocking skills. Neither Braedon Bowman nor Cole Hunt appears to be a threat to take away playing time from Green. Therefore, when it comes to Chargers tight ends, it is Green or bust.

Entering training camp, the Raiders RB situation seemed pretty straightforward. We thought Marshawn Lynch would be the starter and that Doug Martin would step in from time to time. We also knew about Jalen Richard’s abilities as a pass catcher, since he led the Oakland backfield in catches and receiving yards last season. However, UDFA Chris Warren has entered the scene this preseason and shaken things up. The starters do not see very much playing time in these exhibition contests. Nonetheless, it is rather impressive that Warren is leading the entire league in rushing so far in the preseason.

Lynch is the starter on both the depth chart and in preseason games. Couple that with the way Lynch played down the stretch in 2017 (86.8 rushing yards per game over the last five contests) and you have a likely recipe for a productive fantasy player in 2018. Since Richard performed well in the role of a receiving back, a reprisal is very likely for 2018.

Marshawn Lynch turns on the jets! Unfortunately, called back because of a hold. pic.twitter.com/h87rEiuMmR

Another returning RB is having a much harder time in training camp. DeAndre Washington missed the early portion of training camp and has been behind the 8-ball when compared to the others. Even though Washington was a Raider in 2017, Jon Gruden was not and training camp is very important when learning a new offensive system.

The roles of newcomers Martin and Warren are the pressing questions. It is quite possible that Warren has made Martin expendable. The Raiders can cut either player without any dead money on the salary cap. Since Warren is so young, it is unlikely that Raiders decide to let him go, as he could potentially replace Lynch down the line. However, until that happens, Lynch, and to a lesser extent Richard, are the safest bets to produce for fantasy owners.


There has been much turnover from one year to another in Oakland. Outside of depth option Johnny Holton, Amari Cooper and Seth Roberts are the only returning WRs. While Head Coach Gruden has mentioned that the offense will use Cooper as a focal point, Roberts has little advantage in this new offense, especially since he missed a large chunk of training camp. This allowed newcomer Jordy Nelson to get a stranglehold on the starting role. Roberts did return for the Raider’s third preseason game. While the injury set him back, Roberts should see at least a small role with the team.

Speaking of injuries, one player that was starting to be a hot commodity was Griff Whalen. Once the Raiders traded Ryan Switzer to the Steelers, it appeared Whalen would be behind only Roberts for the slot receiver role in 3WR sets. However, after suffering turf toe, Whalen has lost a chance to produce early this season. His position on the final roster is not nearly as secure as it looked late last week.

Other new Raiders include rookie include rookie Marcel Ateman, trade arrival Martavis Bryant and free-agent signee Dwayne Harris. As a starter with Pittsburgh in previous seasons, Bryant brings the most pedigree of these three. While he started with an inconsistent camp, it appears Bryant will be third of the targets totem pole, behind Cooper and Nelson. Harris is listed as the starting kickoff and punt returner on the team’s depth chart, which solidifies his role on the team. Ateman is in an uphill battle for targets and ultimately, Cooper, Nelson and Bryant are the Raiders WRs to target in fantasy.