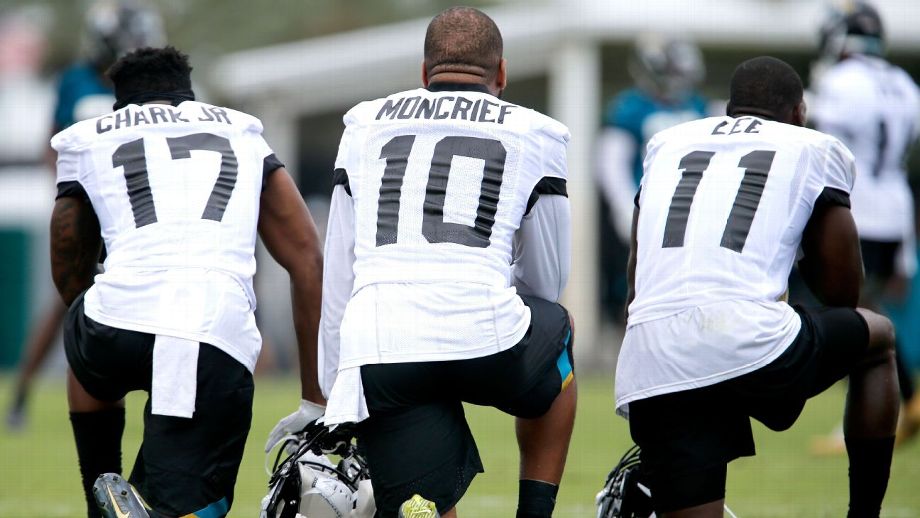 This time of year, fantasy football owners are preparing their draft boards and tiers. While the top backs and targets for NFL teams are almost all solidified, there are plenty of roles that are up for grabs. These are the fantasy-relevant training camp battles for the AFC South. In this series, I am omitting players who are obvious starters; players like DeAndre Hopkins, Andrew Luck, Leonard Fournette and Delanie Walker.

The Texans receiving corps provides us with a great example of diversity. We have Will Fuller, whose speed allows him to get behind the defense. Braxton Miller was a college quarterback, while Keke Coutee is an excellent slot receiver. Both should be able to take advantage of the space on the field created by the presence of other WRs. Sammie Coates and Bruce Ellington both bring experience from different offensive systems, the Steelers and the 49ers respectively.

All of these WRs have gotten a chance to work with QB Deshaun Watson in practice, probably in order to create chemistry. When looking at the Texans depth chart, it is Fuller who is listed as the starter opposite DeAndre Hopkins. As for game time, so far only Ellington and Miller (both listed on second-team offense) have seen preseason targets from Watson. Coates and Coutee act as reserves for now and have similar skill sets to Fuller and Miller respectively. Either could see a significant role on offense, but I find it more likely that Coutee establishes himself as a primary slot WR.

Will Fuller is being taken in the early to mid rounds of fantasy drafts. This is understandable considering his TD efficiency when he played with Watson in 2017. However, Bruce Ellington offers a cheaper option for fantasy drafters, one whose role in the offense is relatively secure.

The TE position has been rather unproductive for the Houston Texans, even with QB Watson. The most productive Texans TE game with Watson under center belonged to Ryan Griffin (61 yards 1 TD). Griffin is listed first-team offense on the team’s depth chart.  2017’s TE target leader for Houston was Stephen  Anderson. It is curious to note that he is listed as a third-string TE while rookies Jordan Akins and Jordan Thomas are above him.

Since Griffin was on the first couple of drives in the Texans second preseason game, he will probably be the starter, at least in the early going. Even so, with the lack of production from this positional group in years past, I would avoid drafting any of them.

Many Colts RBs are seeing work with the first-team offense in training camp. These players include Josh Ferguson, Christine Michael and Robert Turbin ,but there is a strong possibility that two of those players do not make the final 53-man roster. Whoever remains will need to contend with a second-year player and two rookies for the starting job. While that is certainly a possibility, I do not find this to be a likely scenario. For further explanation on the topic, check out my article here.

Marlon Mack got the start in the Colts first preseason game, with Nyheim Hines and Jordan Wilkins seeing playing time in the second half. Hines had an especially rough game, with a 2.3 yards per carry and fumbling the ball twice. Mack meanwhile, had an equal YPC (2.3), but he made up for it with 23 receiving yards on two targets. Wilkins had the best game on the ground of the three, with 3.5 YPC, but that was against reserve defenders.

Since that game, however, Mack suffered an injury and will miss some time. While Michael got the start in the Colts second preseason contest, Wilkins did manage to get some carries in the first half. While the numbers aren’t insane (7 carries, 26 yards, 2 receptions 17 receiving yards) Wilkins was the most efficient of the Colts RBs with 3.7 YPC. However, both he and Hines fumbled the football, something that will make it difficult for these rookies to get on the field. I still feel like the price is right with those two, especially Wilkins. He has the skill set to be a featured back, and realistically, only Mack is holding him back.

With QB Andrew Luck seemingly healthy and ready to return to the gridiron, things are looking up for this positional group. While unquestioned top receiver T.Y. Hilton has only played two series through two preseason games, Ryan Grant and Chester Rogers have seen extra playing time with Luck. They are listed on the first and second team offenses respectively, therefore those are the best candidates to see the field most often. Rogers is also being given chances as a returner on special teams. It appears the Colts want to get the ball in his hands as often as possible. That being said, I believe that Grant will get the first crack opposite Hilton.

As for the rest, James Wright is the only one listed on the second-team offense. However, as has been banged up, opening the door for K.J. Brent and Kasen Williams to play with the second-stringers. The latter was actually the only WR other than Grant and Rogers who saw a target during the Colts’ second preseason game. Still, Grant and Rogers will be the WRs that fantasy owners will want to draft in the later rounds.

Unlike other training camp battles, there might be no clear winner by the time the season starts. All five of these receivers saw time with Blake Bortles on the first three drives of the second preseason game. It appears that all five will see a role in 2018. During fantasy drafts, the safest bet may be the most expensive of these players: Marqise Lee. After leading the Jaguars in receptions in 2017, Lee seems poised to repeat that feat in 2018. He and Keelan Cole started the second preseason game in 2WR sets.

So far in the preseason, both Lee and Dede Westbrook have been Bortles’ targets on third down plays. Rookie D.J. Chark demonstrated some versatility by lining up in the slot, as did Cole and Westbrook at times. Not to be outdone, Donte Moncrief has also made some nice plays in training camp and during the preseason.

With all of that being said, there really is no wrong answer as to who to draft in 2018. Personally, I would target either Cole or Lee as I believe they will get the most chances to be on the field. Since the Jaguars ran a lot of 2TE and 2RB sets in the second preseason game, I would not rely on other WRs as much.

Corey Davis was drafted 5th overall in 2017 and it appears that the Titans will give him every opportunity to pay off that investment. He is the locked in starter. Couple that with the fact that Rishard Matthews is injured, and Davis should be in line for a large target share in 2018. Speaking of Matthews’ absence from training camp, the biggest beneficiary might be Taywan Taylor. He is listed as a starter on the Titans’ depth chart. Taylor was especially impressive in the team’s second preseason game where had had 95 yards and caught two touchdowns.

Taywan Taylor shows his speed with the catch and run for a 47-yard TOUCHDOWN! pic.twitter.com/FqHkTA3dcd

While awaiting Matthews’ return, Michael Campanaro and Tajae Sharpe will battle for the starting spot in 3WR sets. Between these two, Sharpe seems more likely to produce. However, the Titans use 2TE sets often, and once Matthews returns, Sharpe’s potential role could diminish. For those reasons, I would not draft Sharpe for fantasy purposes. I would instead focus on Davis, Matthews and Taylor.