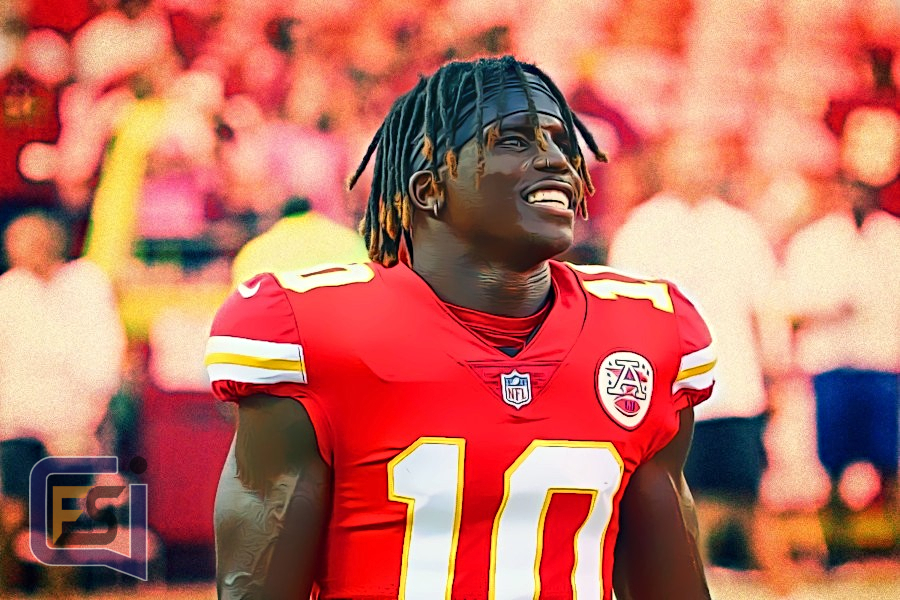 We’re in thick of fantasy draft season, which means we need all the strategy and information we can get. While the draft doesn’t determine the final outcome, it can certainly put you on the right path for a championship. With the increasing popularity of PPR leagues, the wide receiver position is as important as ever. The matchups they have are important too, since a true shutdown corner can throw a wrench into your fantasy week. With that being said, here are the five toughest wide receiver strength of schedules.

Tyreek Hill isn’t your prototypical wide receiver. So when we see he has the toughest schedule at the position, it doesn’t hold as much weight as, say, Sammy Watkins. Hill will rarely see a shutdown corner on him, since he is moved all over and touches the ball in a variety of ways. Instead, the entire defense schemes to stop him. It’s nice in theory, but when he’s faster than everyone and his quarterback can throw it the length of the field, good luck stopping it for four quarters.

Patrick Mahomes with the BOMB to Tyreek Hill for the 69-yard TOUCHDOWN! pic.twitter.com/LENPuZta8k

Like I said, this speaks more to Sammy Watkins. It has been tough sledding for Watkins in the NFL. From multiple injuries to joining the Rams in LA late, he has not lived up to the hype. He has a chance to do great things in Kansas City, with an awesome offensive mind as head coach, on an extremely talented offense. However, he has not shown the ability to win individual matchups consistently, so he certainly is not someone to reach for.

The second-toughest schedule goes to a receiving game that struggled mightily in 2017, but should look much different this year. Gruden is a man of fundamentals, which should help Amari Cooper. If he can catch the ball before he looks to make a move, he should have a solid year. Jordy Nelson is another year older, but it looks like Gruden will actually use Nelson in a way that highlights his strengths, which is something he has not had in the NFL yet. Expect plenty of slants. Martavis “White Tiger” Bryant has struggled to learn the playbook, but his athleticism should be useful when he’s on the field.


Is anyone really shying away from Antonio Brown? If we get past his name, he has a tough schedule, has already been a bit banged up, and has a certain video game curse that could be following him around. But at the end of the day, it’s still Antonio Brown. JuJu Smith-Schuster has quickly become one of the most popular players in the league, and he should be in line for an expanded role this season. The Steelers managed to bring in yet another talented receiver by drafting James Washington. Don’t expect him to be consistent, but Washington will have his weeks, and he will be a problem for defenses in the future.


This is a freakish receiving corps. Keenan Allen is a 6-2 target monster. Second-year receiver Mike Williams is a 6-4 athletic freak, and Tyrell Williams is also a solid 6-4 receiver. No tight end, no problem. The Chargers clearly have plenty of big-bodied threats in the red zone, so they can use their tight end position to block, or bring in Travis Benjamin as the speedy fourth receiver. Barring injury, this has the potential to be the best offense in the AFC.

The Ravens had no talent in the pass-catching department, so they went out and grabbed Michael Crabtree, John Brown, and others this offseason. A motivated Joe Flacco looks to be much-improved, so this passing attack could shock some people. Brown has really impressed in training camp, which shouldn’t surprise anyone. He has been terrific when healthy, so if he can avoid injury, he will be a terrific value. I’m not sure if I’ve heard a single person say Michael Crabtree’s name since he signed in Baltimore, which is fine with me, because I’ll talk him up. He was clearly the best receiver in Oakland the past couple years, and he has a good shot to be a 65-catch, 1,000-yard receiver for the Ravens, even with a tough schedule. Honestly, the factor that is hurting this passing offense most is the defense, which has potential to shut teams out.