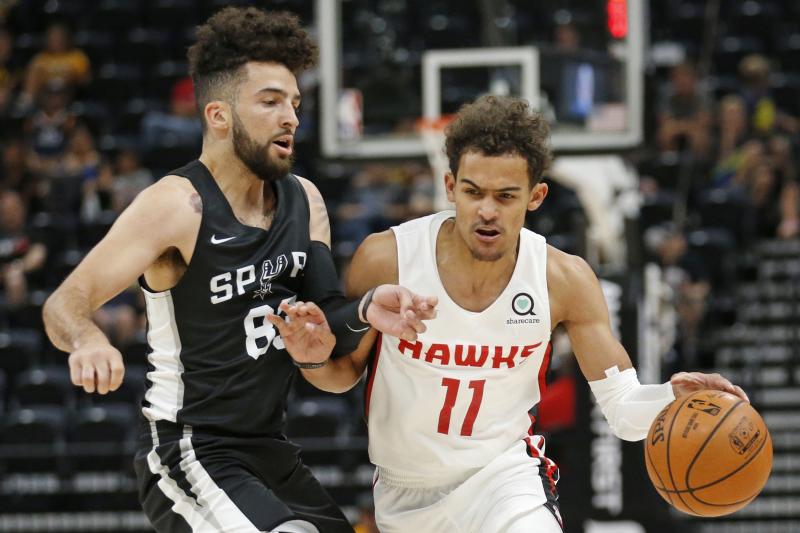 The first game jitters seem to have stuck around for Trae Young and the Atlanta Hawks. The Hawks fell by a wide margin to the San Antonio Spurs in both teams’ second Summer League appearance. The game was actually a larger blow out than the 103-81 final score. The Spurs, led by several of the players that led the team’s G-League affiliate to a G-League title in 2017, were up by 27 with a minute still remaining in the first half of action.

Experience Prevails for the Spurs

As crazy as it is to think about, the San Antonio Spurs’ Summer League team is stacked with experience, just like their NBA roster. Players such as Derrick White and Jaron Blossomgame, leaders on the Austin Spurs G-League team, have brought that same edge to the Summer League and it showed against Atlanta.

Blossomgame, a second-year wing out of Clemson, managed a double-double with 16 points and 10 rebounds. The 6’7″ wing is already known as an explosive athlete and capable defender. Blossomgame’s offensive game, needing some polish coming out of college, is what really held him out of the NBA rotation. After a successful G-League season and some solid Summer League play, he could challenge for a spot on the Spurs everyday roster.

White is a bit of a different story. Also a second-year pro, White probably already has a spot on the Spurs roster. That being said, the 2017 first-round pick has plenty to prove. White could grab a major rotation spot, likely off the bench, if he continues to play with the confidence he has displayed to start the summer. He continued his impressive play tonight with 21 points, 9 assists and 6 rebounds on 7-15 shooting.

While I cannot stress enough that it is too early to pass judgment, it is hard to just ignore another poor shooting performance from Atlanta’s Trae Young. Shooting is, of course, Young’s premier skill. Similar to Monday night’s game, Young also failed to generate a major contribution with his shot not falling. That may be the single fact about the former Sooners’ first two games that should certainly scare Hawks fans. Young is 9-36 from the floor in his first two games. If he is not going to hit shots, he needs to increase his assist numbers to be effective.

Of course, it was not all bad for Atlanta despite the blowout loss. 2017 rookie standout John Collins was impressive with an efficient 19 points and 7 rebounds on 7-14 shooting. Collins was also 0-4 from behind the arc, meaning he was almost unstoppable (7-10) from inside the arc. The explosive power forward shot 34% from deep as a rookie, so the 0-4 should not bother Hawks fans as much as the inside dominance should excite them.