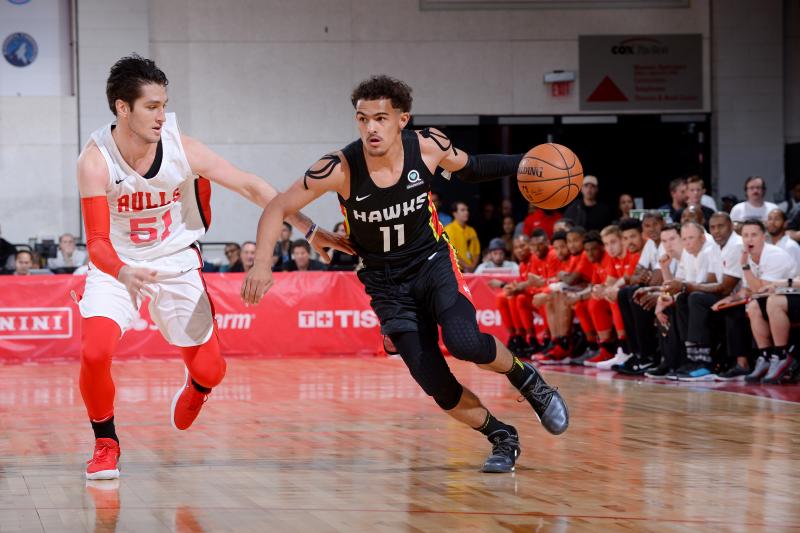 It finally happened. The moment all of the Trae Young truthers have been waiting for. After three disappointing outings and one tantalizing but inefficient display against the Knicks, Trae Young finally went off. He lit up the Chicago Bulls and drained 7 threes on his way to 23 points. He added 5 assists and played capably on defense. To top it all off, he got the team its first win of the summer. All of that, of course, came with budding star John Collins on the bench.

The comparisons drawn between Trae Young and superstar Steph Curry may be a bit unfair. That is certainly a big claim to make of an unproven player. That said, Young finally gave the NBA a glimpse of where those comparisons came from.

It was not just the fact that Young hit 7-13 threes in a winning effort. It was the type of threes that he attempted. The former Oklahoma Sooner pulled up from well behind the three-point line for the majority of his 13 attempts. Some were highly contested. Some were quite off-balance. It did not seem to matter, as most went in.

Young still has plenty of room for improvement. Despite the 7-13 display from three, he shot 7-19 from the field (36.8%). That would mean that Young went 0-6 inside the three-point line, which will not get the job done most nights in the NBA. The rookie will have to be more than a three-point shooter if he intends to live up to the hype around him. That said, proficient three-point marksmanship has always been a sound way to open up the rest of one’s offensive game. Only the great defenses can take away everything.

Young also had 4 turnovers in the game. While a problem, it should be seen as a minor one. Most young players, particularly young guards, struggle with turnovers to begin their careers. The adjustment to the speed and flow of the NBA game can take some time. Young has plenty of time before the turnover issue should be considered a prominent problem with his game.

Former Duke Blue Devil Wendell Carter Jr. impressed yet again despite the loss. The big man played a near perfect game across the board. He shot the ball wondrously. Carter Jr. missed only four field goals (9-13, 69.2%) and connected on his only three-pointer and all four of his free throw attempts. That level of shooting is incredible for a player of his size and physical ability.

The Atlanta, GA native did not stop there. He added 6 rebounds, 2 assists, and 2 blocks to his stat line in just 27 minutes on the court.  Also worth noting is the fact that Carter Jr. failed to record a single turnover in his tremendous effort. It has been clear, at least thus far, that there is very little Carter Jr. cannot do. He should serve as a strong complement to last year’s first-round pick Lauri Markannen and give Chicago a dynamic frontline for years to come.