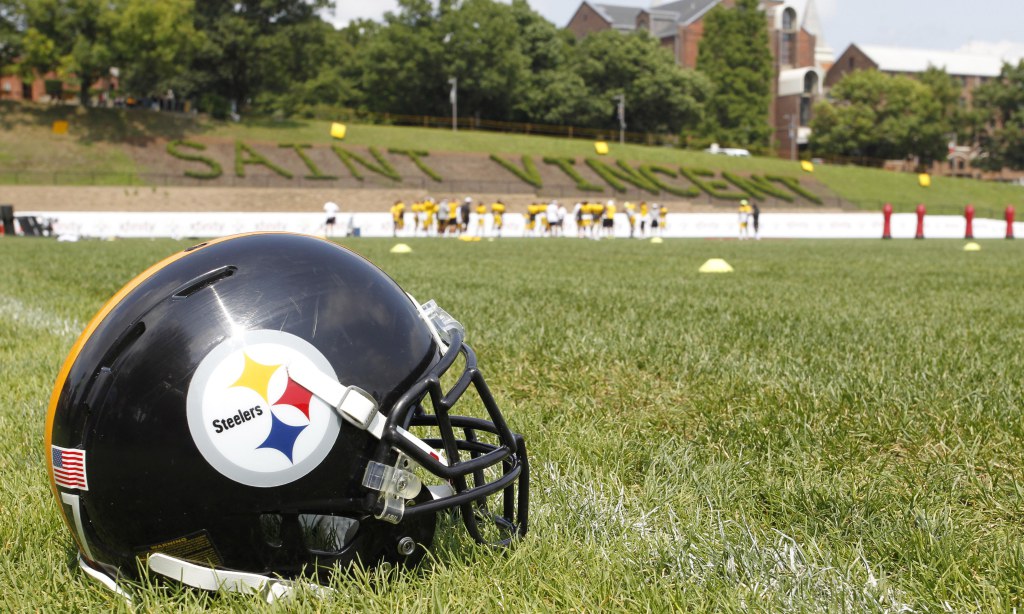 Football is finally back, as NFL teams report to training camp.  The Steelers training camp at Saint Vincent College in Latrobe begins today, July 25th.  They will be there until August 13th, then complete camp at the UPMC Rooney Sports Complex on the South Side.

After a great regular season and horrible postseason in 2017, the Steelers’ window to reach a Super Bowl may not last long, as Ben Roethlisberger is aging.  They are in ‘win now’ mode, but do they have what it takes to reach the Super Bowl?  Here’s five things to watch this training camp.

5–What will they do without Le’Veon?

Le’Veon Bell is in the same position as a year ago – he and the Steelers couldn’t agree on a long-term contract, so he’ll probably sit out most of training camp.  Last year, he started the regular season slow; will the same thing happen this year?  In his absence, who will emerge as the primary backup – James Conner, Stevan Ridley, Fitzgerald Toussaint, or rookie Jaylen Samuels?

4–Who’s the odd man out at backup quarterback?

The Steelers were set at quarterback with Big Ben, Landry Jones and Joshua Dobbs.  They then drafted Mason Rudolph in the  third round of the 2018 Draft, and now nobody knows how it will all shake out.  The conventional wisdom says Dobbs will be out, but what if Rudolph has a great preseason?  Will the Steelers cut Landry and make Rudolph the primary backup?

3–How will the new offensive coordinator do?

The Steelers didn’t extend the contract of Todd Haley, and quarterbacks coach Randy Fichtner was promoted to offensive coordinator. Why would they make that change if the offense was consistently one of the best in the league? One of the main reasons had to be because Haley and Roethlisberger never got along.  Also, as good as the offense was in total yards, it wasn’t very good in red-zone scoring. Will Fichtner improve on an already good thing, or will the Steelers miss Todd Haley?

2–Will the rookies make an immediate impact?

The Steelers drafted safety Terrell Edmunds in the first round of the 2018 Draft.  Will he win a starting safety spot or have a large role in sub packages?  Second round pick James Washington will be asked to fill the hole left by the trade of Martavis Bryant to the Raiders.  Fifth round pick Jaylen Samuels could be used as a running back or tight end; could he get touches right away?

The defense never recovered from Ryan Shazier’s spinal cord injury last December.  How will the defense make up for his loss this year?  Linebacker Jon Bostic was added as a free agent, but how much will he play? Will 2016 draft pick Tyler Matakevich start at inside linebacker? Free agent Morgan Burnett replaces Mike Mitchell, or will he? What role will first round pick Terrell Edmunds have?  Something will be needed to strengthen a defense that was weak against the run after Shazier’s injury, and no one can forget the 45-42 playoff loss to Jacksonville.