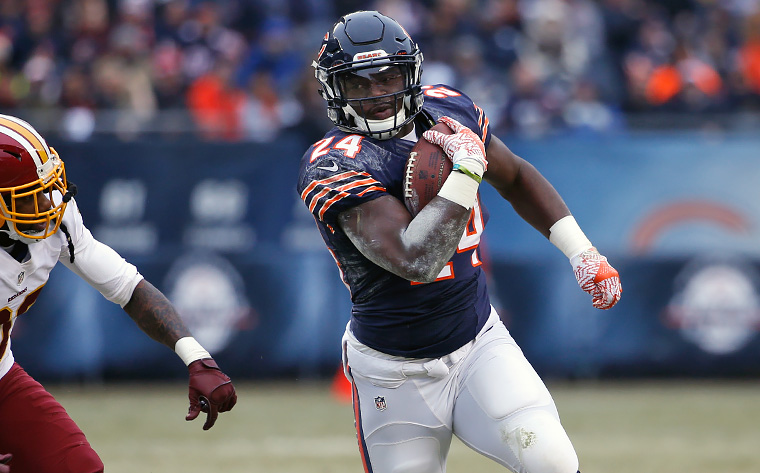 Every year, an undervalued player comes out of nowhere to help carry fantasy squads to a championship. Last year, we had the likes of Alvin Kamara (pick 12.08), Adam Thielen (pick 9.03) , and even Carson Wentz (pick 11.12). These were all players who were overlooked and ended up finishing top-10 at their respective positions. Coming into the 2018 fantasy season, there will undoubtedly be a handful of players who were overlooked at this time, and come this time next year, we will be dumbfounded on how we didn’t see those breakouts in our future. This is my top undervalued players for 2018 in PPR leagues.

ADP’s are all from Fantasy Football Calculator

All stats are from Pro Football Reference

Players previous finishes are from ESPN

Lamar Miller has been one of the more disappointing fantasy contributors since he arrived in Houston. With the Dolphins, Miller owners claimed he didn’t get enough touches based on how well he was performing, and I think we all rejoiced when he moved to Houston. Fast forward, Miller hasn’t done enough with his touches to make him a top-12 back. Not to mention, D’onta Foreman started to eat into Miller’s workload, almost to where Foreman was starting to become a solid flex option before his ruptured Achilles.

So why do I have Miller as an undervalued player? I don’t believe Foreman’s a better player than Miller. I think Foreman is a good banger between the tackles, but he’s not very fast, and doesn’t wow me with his side to side mobility. Also, Foreman only caught seven passes in 10 games. From Week 2 through Foreman’s final game (week 10), Miller out-touched Foreman 169 to 83. So Miller averaged 18.7 touches to Foreman’s 9.2 per game. When the Texans were tied and down last season, D’onta Foreman averaged 6 touches, Lamar Miller averaged 11.6. What these stats tell you is that the Texans trust Miller more when they are down or in close games due to his overall skill set and pass catching ability.

Sophomore quarterback Deshaun Watson is looking as though he will be back in time for training camp and most importantly the season, coming off a torn ACL in week 7. This will only help the offense open up more opportunities for Miller. On the other hand, D’onta Foreman is still recovering from his ruptured Achilles, and his week 1 status is up in the air. If Foreman starts the season on the PUP, he will have to miss the first 6 weeks of the season, and the majority of the touches will be Miller’s.

All the hype coming into training camp is on rookie running back Royce Freemanv(pick 5.04). I have some doubts about the starting job being Freeman’s to start the season. Freeman was drafted from Oregon, a college known to have running backs like LaMichael James, Kenjon Barner,  and De’Anthony Thomas, who don’t translate to the NFL.

Devontae Booker was a player last year who many thought was going to take the Broncos’ starting running back job away from C.J Anderson. Although that didn’t happen, Anderson is now with the Carolina Panthers and left behind 245 carries up for grabs.

If Booker gets a legitimate shot at the starting job for Denver, I believe he will earn it. Booker is a better all around player than what Freeman’s tape showed at Oregon. If Devontae Booker doesn’t earn the starting role, I believe he will play a big role in the pass game, as well as rushing. I can’t see a situation in which Booker is phased out of the offense and the whole show belongs to Freeman.

Tight end, the most unbalanced position in all of fantasy football. The position where the difference between TE1 versus TE12 is 101 points! At quarterback, if you went from 2017 points leader Russell Wilson and subtracted 100 points, you would get QB13 (Blake Bortles), but if you went from second place quarterback Cam Newton and subtracted 100 points, you would get QB23…Eli Manning. So what this means if you don’t get an elite guy, then everyone else is pretty much in the same boat when it comes to the QB position. So we need to pick a tight end who is going late in drafts, and who has potential to have a good season due to offense and quarterback play. Jack Doyle checks both boxes for the upcoming 2018 season.

Big news for Jack Doyle,  Andrew Luck will not be placed on the PUP list, and will reportedly be a full-go for training camp. Jacoby Brissett was the starter for the Colts in 2017. In his 15 starts, Brissett only had three games of multiple touchdowns thrown, and had 6 games of zero touchdowns thrown. Not to mention, having 6 games of throwing for less than 200 yards. Andrew Luck, in his regular season career (70 games), has had 45 games in which he threw for multiple touchdowns (64%), and only has 13 games of less than 200 passing yards and only 8 games of zero touchdowns! I think it’s safe to say Luck is not your average quarterback. If Andrew Luck shows he’s healthy this preseason and shows flashes of his old self, Jack Doyle will be a steal in your upcoming draft.

Although Howard is still going in the top three rounds of fantasy drafts, I believe he can actually be a value when it comes to draft day. Especially you readers with picks 1.1-1.4, Jordan Howard will ultimately be your RB1-2 depending on the route you take.

In Jordan Howard’s past two seasons with the Chicago Bears, he has rushed for 2,435 with 15 touchdowns. The Bears like to use Howard in the running game more than your average back. In 2016, Jordan Howard accounted for 71.5% of all Chicago Bears running back carries. In 2017 he accounted for 73.4% of team running back carries, more than Todd Gurley. He finished 11th in carries in 2016 (only started 13 games), and last season finished 5th in carries.

A player being hyped this offseason is Tarik Cohen. Many believe Cohen is the real deal, and can steal away some touches from Jordan Howard. I think Cohen is very talented but only has one possible role for this upcoming season, pass catching. Cohen caught 53 passes on 71 targets in 2017, and with Jordan Howard’s lack of pass catching ability, Cohen should have no rival for backfield targets. Cohen could get a bigger opportunity, but it shouldn’t take carries away from Jordan Howard.

Name value is a powerful influencer when it comes to fantasy football. Devante Parker was drafted with the fourth pick in the fifth round in 2017 fantasy ppr drafts. Parker went on to miss three games and finished the year with only one touchdown. Parker finished last season as the 50th ranked wide receiver. On the contrary, Kenny Stills wasn’t drafted in most leagues, and finished the season at number 28.

Heading into this offseason, take a guess who is being drafted first? That’s right, shockingly it’s still Devante Parker. Parker is going at pick 8.09 while Stills is going at pick 11.10. Since 2015, Stills has out-yarded Parker by 105 yards and 10 touchdowns. Of course, the yardage isn’t much but the 10 touchdowns is a huge factor.

Jarvis Landry has left Miami for bigger and better things (just kidding). With his departure, Landry left behind 161 targets and 1,000 yards up for grabs. The return of Ryan Tannehill actually gives me hope for better production. Surprisingly, Jay Cutler doesn’t care about football nor is he any good! Ryan Tannehill is a much better quarterback than Jay Cutler and company.

The stats I have shown you are not to glorify that Kenny Stills is a way better player than Devante Parker. My goal with this pick is to show you that they have similar productions, so why take the player who hasn’t put it together yet in the 9th round when you could get a player who’s going to put up the same if not better stats 2-3 rounds later. I admit Parker could have a breakout season, but I would rather take my chances on Stills.

Who to Draft Instead of a Kicker in Your Draft

How to watch All blacks vs springboks live stream

Who to Draft Instead of a Kicker in Your Fantasy Football Draft
How Will Last Year’s Top-5 Running Backs Perform in 2018?