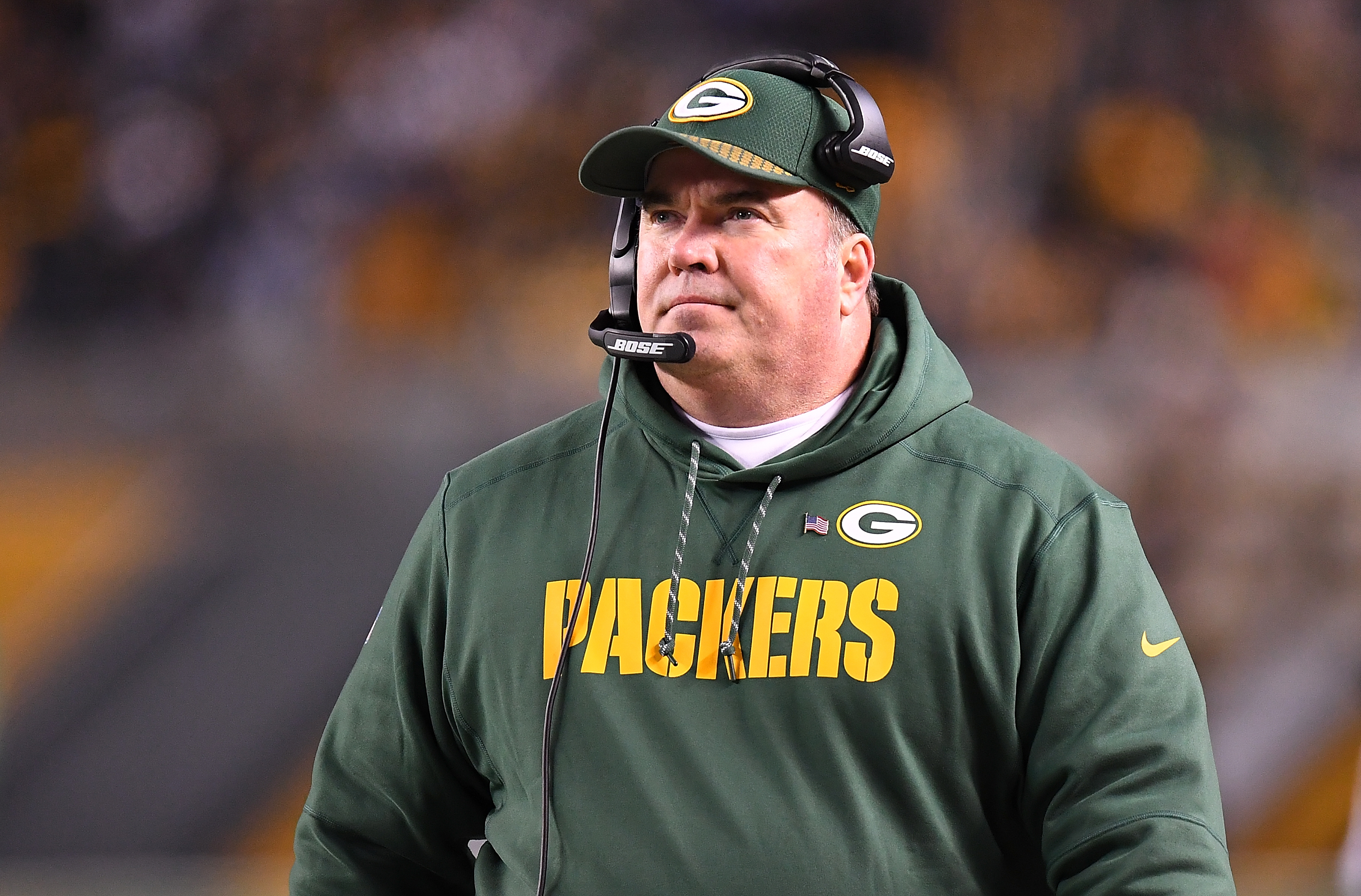 For the past few years, various clans of Packers fans have been clamoring for change. It started with some seemingly praying for a new defensive coordinator, which was granted after the 2017 season when Dom Capers was fired for Mike Pettine.  Others pointed the finger at management, blaming General Manager Ted Thompson for mediocre drafts and what seemed like an indignant disdain for signing free agents.  After 2017, Thompson stepped down and allowed Brian Gutekunst to take the reigns as the General Manager of the team. This left Mike McCarthy as the last remaining cog from the previous era that won Super Bowl XLV in 2011.

This season was poised to be the Year of No Excuses: Aaron Rodgers coming back from the busted collarbone, finding a one-two punch at running back, signing Jimmy Graham, securing future services from Davante Adams, and that new defense led by Mike Pettine and first-round pick Jaire Alexander. However, after Thursday night’s frustrating loss to the Seattle Seahawks, it is now time for the Green Bay Packers to move on from Mike McCarthy.

While some groups of Packers fans have been calling for McCarthy’s firing for a few years now, there’s always seemed to be a reason to keep McCarthy around. Injuries derailing promising seasons, playoff appearances, and poor defense have all kept McCarthy around. After the Super Bowl win in the 2010-11 season, the Packers went 15-1 in 2011, but were promptly bounced from the playoffs in the divisional round by the eventual Super Bowl champion Giants.

In 2012, an 11-5 record brought Green Bay back to the playoffs and another Divisional round loss to the NFC’s Super Bowl representative, this time the upstart 49ers.

The 2013 season brought the first wave of the anti-McCarthy crowd, after Rodgers was out eight weeks with a broken collarbone, exposing some weaknesses in the Packers system.

2014 was a resurgence, when the team was minutes away from a Super Bowl birth until a catastrophic collapse in Seattle.

In 2015, another playoff run and Divisional Round loss in OT to the Cardinals. Another trip to the NFC Championship game was the Packers fate in 2016 before being thoroughly outclassed by the Atlanta Falcons.

Aaron Rodgers suffered another broken collarbone in 2017, leading Green Bay to miss the playoffs for the first time since 2008, Rodgers first season as starting quarterback, with 2018 trending towards a similar fate.

Lack of Creativity and Adaptability

One of the main critiques of McCarthy has been his lack of creativity when it comes to the offense. When McCarthy took over in 2006, his offense designed to spread the field was tearing NFL defenses apart, rejuvenating Brett Favre’s career. Quick slants that would set up big plays downfield ruled the roost and turned the Packers back into a powerhouse. 12 years later, the offense has become stale. A simple Google search shows pages and pages of players, columnists, and opponents claiming the system is predictable, frustrating, and needs to change. Yet, year after year, things remain the same–Aaron Rodgers leading the team to relevancy but not being able to overcome his surroundings.

The 2017 season was largely written off because of Rodgers’ injury and Brett Hundley struggling to grasp the offense. However in 2018, it’s Aaron Rodgers playing below the sky-high expectations that come with being the highest-paid quarterback in the history of the NFL. All year long, Rodgers has missed open receivers and lacked the “magic” that has brought Rodgers to be hailed as one of the most talented quarterbacks of all-time.

Thursday night’s loss to the Seahawks further exasperated that notion, when one particular freeze frame of an open Aaron Jones on third down led to a sack, resulting in a field goal instead of a touchdown, the Packers’ lone points of the second half. While Rodgers certainly should shoulder a portion of the blame, as the franchise quarterback tends to, there seems to be greater issues at play. Rodgers has missed practice time with an injured knee, coupled with injured receivers leading to lack of chemistry, which is a definite cause for some of the issues.  However, McCarthy’s unwillingness to run the ball with Aaron Jones, the NFL’s leading back in yards per carry, has frustrated fans and players alike.  Aaron Rodgers himself has said that the team needs to get Jones the ball more. Yet, game after game, the touches aren’t there. Green Bay came into Week 11 as the 14th-best running team, but could definitely be ranked higher with an actual commitment to run the ball. It would also take some of the pressure off of Rodgers.

Another frustrating aspect of the McCarthy-led Packers is the number of hits Rodgers seems to take. Football is a contact sport, and this is bound to happen to some extent. Green Bay allowed 27 sacks coming into Week 11, and gave up five more on Thursday night against Seattle. Past seasons have placed the blame on receivers not being open, offensive line injuries, and Rodgers holding onto the ball too long. It was easy to write off Brett Hundley’s struggles as a fifth-round pick who never grasped the offense. Yet, current struggles seem to revert back to poor play design.

Referring back to the third down play where Rodgers missed the open Jones, the freeze frame shows Rodgers looking to his left instead of the open Jones to his right in the flat. The next clip would show Rodgers being forced to turn his back and try to scramble to find open green field instead of an open white jersey. While Rodgers will be the first to admit that there were plays he should have made, this seems to point back to the issue of poor play design. A lackluster zone blocking scheme leading to Rodgers not being able to get through his progressions. It’s easy to point out a missed receiver as an armchair coach thanks to freeze frames and Madden helping Average Joes think they can read defenses. However, this is week after week, season after season.

McCarthy has also been criticized, at times rightfully so, for poor game management. Time and time again McCarthy seems to be burned by trying to sneak an extra possession and burning timeouts when a team is seemingly willing to run out the clock, sometimes resulting in a third down conversion leading to a score. In Thursday night’s loss to Seattle, McCarthy burned through his timeouts and was unable to challenge a play late in the game that could have swung momentum back to Green Bay.  Later in the game, Green Bay would be faced with a 4th and 2, electing to punt instead of giving Rodgers a chance to continue a go-ahead drive.  In Green Bay’s Week 9 loss to New England, the matchup that was supposed to feature two of the GOATs squaring off for only the second time head to head. It ended with McCarthy being supremely outclassed by Bill Belichick. The Packers seem to start strong, but struggle late in games. Belichick’s ability to make adjustments on the fly, late in the game has lead to great triumph, while McCarthy’s inability has led to heartbreak for Packers fans everywhere.

Ultimately, McCarthy has had a very successful tenure in Green Bay–a Super Bowl championship, 4 NFC title game appearances, and an overall record of 135-82-2.  However, all good things must come to an end.  It would be an absolute travesty if over the last 25 years, the Packers only win two Super Bowls with two of the NFL’s best quarterbacks. Green Bay has shown flashes off the brilliance from early in McCarthy’s tenure, but after the 2018 season, it is time to move on.