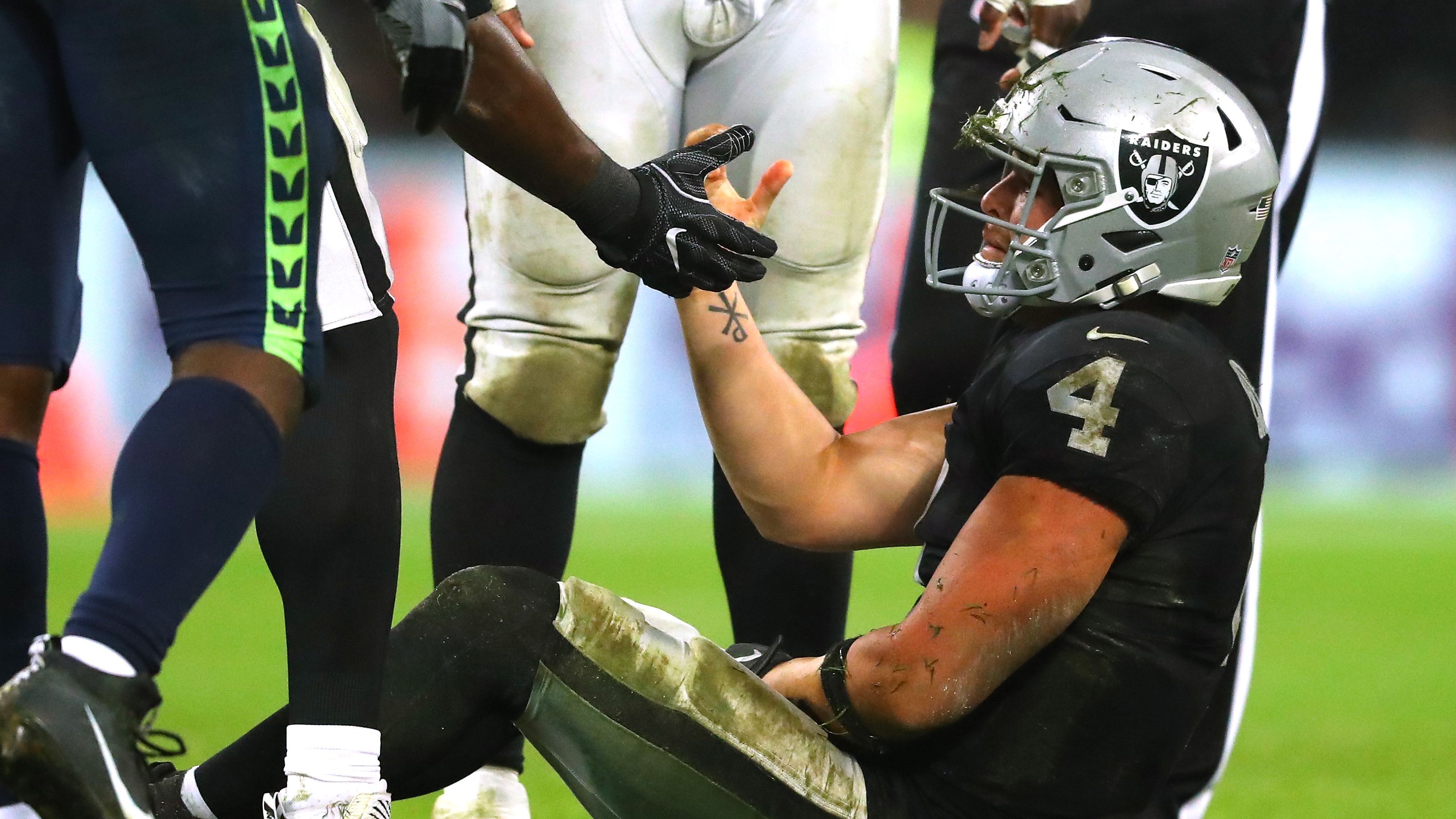 Derek Carr was drafted in 2014 to put an end to years of Raiders’ quarterback struggles. The list of quarterbacks that preceded Carr is almost as comical as the Cleveland Browns, especially when you see the likes of JaMarcus Russell, Terrelle Pryor and Bruce Gradkowski who ironically came from the Browns. But Derek Carr was different. Derek Carr had a very good collegiate career at Fresno State. In his final season in 2013, Carr led the FBS with 50 touchdown passes and was ranked by many as the best pure passer in the entire draft. Fast forward to today, and there is no shortage of drama surrounding Carr.

Jon Gruden was attracted to the Raiders’ coaching job because of Derek Carr. During the run-up to the 2014 NFL Draft, Raiders Owner Mark Davis was advised by Gruden, then still on Monday Night Football, to draft Carr. This is what The MMQB’s Albert Breer had to say about Gruden and Carr in the 2014 Draft:

“But to the coaches who were there, there was a feeling that Davis, who’d always been interested in bringing back Gruden, wanted Carr badly because he knew that Carr, if he panned out, could wind up being a chip to entice the old coach.”

If that wasn’t enough, look at the conversation Gruden and Carr had in the “Gruden’s QB Camp” segment on ESPN.

Gruden literally said in the piece, “I want you.” So this was supposed to be a match made in heaven. Gruden got the quarterback he wanted, and Carr gets to work with a man who probably knows more about the game than anyone else.

The 2018 season hasn’t gone well for the Raiders. They currently sit at 1-6, last in the AFC West, and have already traded away stars Khalil Mack and Amari Cooper.

The offense, which was supposed to get better under Jon Gruden, has been among the league’s worst. The Raiders rank 28th in the league with just seven touchdowns. Carr’s eight interceptions are tied for eighth-most in the league. This was the same quarterback who just two years ago led the Raiders to their first playoff birth in 14 years.

Maybe some of Carr’s struggles can be attributed to the new offense he’s had to learn. He’s having to adapt to a radically different scheme than he’s accustomed to. In fact, Carr’s best season in 2016 came when he had the same offensive coordinator, Bill Musgrave, for the second consecutive year. The Gruden offense relies heavily on “dink and dunk” style short passes, while being conservative on the downfield shots. Think about this, in the 2018 season, Derek Carr’s average pass is traveling a league-low 5.73 yards downfield. The average for someone with Carr’s attempt numbers is 7.9 yards.

This isn’t the kind of passer Derek Carr is. Carr has always been a savant with throwing the deep ball. In fact, going back once again to his great 2016 season, he was among the best in the league in airing the ball out downfield.

Can he improve that in 2017? pic.twitter.com/xUClvHYzaQ

Being second in any category to Tom Brady is not bad indeed. So the culture shock of a Jon Gruden offense surely must of had an effect on Carr.

If it feels like I am consistently making reference to the 2016 Raiders season, it’s because I am. When Carr brought the Raiders into relevancy for the first time in over a decade, he wasn’t able to lead them into the playoffs due to a broken leg suffered in week 15 at the hands of the Indianapolis Colts. Connor Cook wasn’t able to have the same success as Carr, and the Raiders lost their first and only playoff game. 2017 Derek Carr wasn’t as nearly good as 2016, and the Raiders finished 6-10, fired Jack Del Rio, and brought in Jon Gruden.

But the thing is, the roster that started losing all but one of their games this season had most of the stars from the original 2016 cast still intact. They still had Carr under center and Amari Cooper catching passes. They even upgraded at tight end, bringing in Jared Cook. But still, Jon Gruden didn’t view this team as a contender, and as a result he started shipping players out, replacing them with veterans, and a lot of guys on the wrong side of 30 years old. In fact, with an average age of 27.4 years, the Raiders have the oldest team in the NFL. Not necessarily a stat you want to lead in.

Now the conversation shifts to what’s next. With Mack and Cooper gone, rumors have swirled that Carr may be the next to go. Gruden has come out and said that Carr will not be traded. But the fact remains that the Raiders are a rebuilding team and Carr is just three years into a five-year, $125 million dollar contract he signed, again, after his great 2016 season.

I don’t see why the Raiders would want to get rid of Carr. With the volatility and uncertainty that comes with drafting a quarterback out of college, if I were the Raiders, I would much rather have the safe bet in Carr. Plus, Carr has unfinished business to do with the Raiders. It was his play that got them into the playoffs, but he had to watch as someone else quarterbacked the team. He has to be itching at another shot at post-season redemption.

In week 6 against the Seahawks, Carr was hit hard and driven to the ground, which injured his arm. When he was on the ground, it appeared that he was crying.

You can be the judge on whether you think he was crying. If he wasn’t crying, then I’m not sure what else he could be doing there. But let’s say for argument’s sake he was crying, so what? Does crying make him any less of a quarterback? There is no questioning the man’s toughness. His brother even took to Twitter to lead an impassioned defense.

2 Missed Games (because they made him)

When asked about crying, this is what Carr himself had to say:

“I’ve broke my back, I’ve broke my ankle, I didn’t cry then, so I guess the shoulder was really tough for me… It’s funny, man, my trainer actually sent me some pictures of me working out making the same face. So, I guess I cry when I train too.”

But it doesn’t stop there. Carr took to Twitter and again pled his case that he wasn’t crying.

Don’t even waste your time with this big bro. On the ground I yelled get me up get me. Then I got to the sideline and yelled again. Not one tear. Not one time. There is the Truth. People will click on it because it sounds crazy. But stop playing with me.

This is a lot of effort on Carr’s part to change the narrative that he was in fact NOT crying. The Raiders and Carr are expending a ton of energy on this crying scandal. One has to wonder if they could be focusing on, oh I don’t know, ways to improve a team that is 1-6. It’s silly for this to be their main focus.

There are reports coming out saying that the Raiders’ locker room is “fractured” over this crying thing. The report from The Athletic says that Carr will have a hard time leading his teammates and having their respect after he cried. I don’t believe that for a second. If Carr is indeed “losing the locker room,” it has to be because of his poor play. Having more picks than touchdowns will tend to that effect.

Moving forward will be interesting for the Raiders. They certainly aren’t competing this year, which means they will have to be smart in using their three first-round picks in 2019. They will have to restock a barren defense, as well as give Carr more weapons to throw to. But all the trade talk and uncertainty surrounding Carr’s future surely has had an effect on his mentally. This is the most scrutiny he has been under since he entered the league in 2014. So far, he’s done his best to fend everything off, but he is going to be fighting an uphill battle. I’ve been a big Derek Carr fan since he entered the league and I think he can once again return to dominance. It remains to be seen how the Gruden rebuild will work out. Until then, we can only hope for the best.