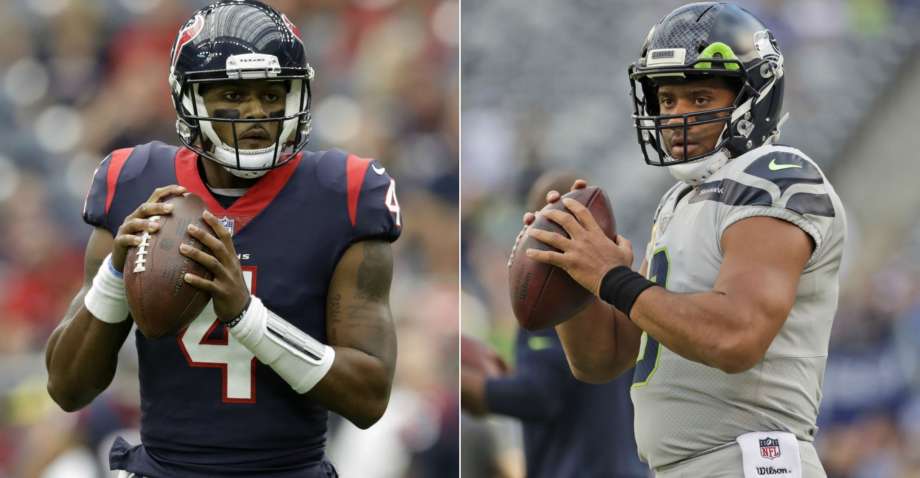 It has been a wild week for the Pittsburgh Steelers. Receiver Martavis Bryant called out JuJu Smith-Schuster for taking his reps away this season on Twitter at the beginning of the week. The consequence was a benching for Bryant and a huge week for JuJu in a key win for the Steelers against the Lions. Now, Bryant really wants out of Pittsburgh while the offense around him seems to be clicking better than ever.

While Richard Sherman racked up two key interceptions and Seattle got a third for a pick-six, this game was an offensive slug-fest from start to finish. In what was undoubtedly the game of the week, if not the year, both rookie quarterback Deshaun Watson for Houston and Russell Wilson for Seattle threw for over 400 yards and four touchdowns each. This outpouring of offense was a surprise especially for Seattle, who has struggled to consistently produce on the offensive side this year. They still, however, only rushed for 33 yards in the win. The storylines coming out of this game still shine a light on the truly spectacular rookie year of Deshaun Watson (and an elite performance from DeAndre Hopkins) and the ridiculous upside of a Seattle team that is seriously lacking consistency.

This week, the lack of Jay Cutler seemed to cripple the chances of a Miami Dolphins victory. With their quarterback out, Matt Moore struggled for the Dolphins, throwing two interceptions. The Dolphins also rushed for less than 50 total yards against a very stingy Ravens D. The Ravens meanwhile had their own quarterback scare when Joe Flacco suffered a hard hit to the head while sliding from Miami linebacker Kiko Alonso. Flacco left the game and is questionable for this coming week while Alonso is facing retribution from the league for the hit. The Ravens were just fine without Flacco, as Ryan Mallet stepped in to throw for a touchdown and closed out what was a dominating game for the Ravens. In weeks to come, the Dolphins will wait eagerly for the return of smoking Jay and Baltimore will continue to ride their defense no matter who is taking the snaps behind center.

With the NFL Trade Deadline today, we’ve seen some big names already move and others may be close behind. Adrian Peterson to Arizona and former All-Pro Defensive Lineman Marcell Dareus to Jacksonville from Buffalo have been the big moves so far this year, with both filling holes on teams hoping to be more competitive. Quarterbacl Jimmy Garappollo was also dealt to San Francisco this week, and Jay Ajayi was trade to Philadelphia this morning.  Other names that have been mentioned include the previously stated Martavis Bryant, Carlos Hyde, Matt Forte, Eric Ebron and reportedly even the retired Calvin Johnson. Big names could be headed to new places, which makes for a very exciting time indeed.

By now, it seems we must accept that the Minnesota Vikings are a playoff favorite in the NFC North. No one wanted to give the Vikings their due, and that’s not quite fair. While the injury of Aaron Rodgers did open up the division, the Vikings themselves are a walking infirmary unit with injuries at pretty much every key offensive position, and several defensive names as well. Then it was the Lions who seemed to be dropping the ball and the Bears who would ride their rookie to a surprising NFC North title. But after week 8, it is the Vikings who have an unsung defense that is one of the best in the league, led by Everson Griffin, who has ten sacks this season with at least one in each outing. Minnesota also has two of the league’s most productive receivers this year in Adam Thielen and Stefon Diggs, leading a surprisingly explosive offense on a surprisingly good team. Don’t let the circumstances fool you, the Vikings deserve all of the success they have reached this season and will only continue to succeed in the weeks to come.

6. A Real Contender Arises from Raiders vs. Bills

And it isn’t Oakland. The Bills are now 5-2 with a real shot at a wild card spot in the AFC, with usual wild card favorites like Oakland and Denver failing to hit their stride. The Raiders felt the absence of suspended Marshawn Lynch, as they were only able to rush for 47 yards total and weren’t even able to ride a 300-yard passing game from Derek Carr to victory. The Bills are simply a more complete team than the Raiders, much of why they were able to secure the 34-14 victory and why they are pushing hard for the playoffs this season. The Bills don’t need Tyrod Taylor to throw for 300 yards every week, though he’s shown he could, because their rushing game is one of the best in the NFL. Their defense is also very capable of holding its own. Don’t sleep on Buffalo, and don’t count on the Raiders come playoffs.

This is not a coincidence. Luke Kuechly means the most to this Panthers team in terms of one player making the biggest difference. Period. Many were confused how the Panthers were struggling in the past two weeks when they had been on such a roll, but the victory after their key star returned erased any confusions on the matter. Kuechly racked up eight tackles and an interception in the 17-3 victory over Tampa Bay. While the Panthers still trail the Saints in the NFC South, they have shown that they have the talent to overcome most teams out there. As long as Kuechly is on the field, that is.

Well the Jets are playing better than they have in a longtime, and the Falcons can’t quite seem to figure things out. However, it was Atlanta who still had too much talent for New York to overcome. The Falcons won 25-20 despite trailing in the fourth quarter and relying on three field goals to make the difference at the end of the game. Again, the Jets didn’t play bad at all, with Josh McCown throwing for 257 yards (three more than Matt Ryan) and two touchdowns (the same amount as Matt Ryan). But ultimately, the Jets defense just couldn’t hold on to a lead, a trend that has cost them numerous heart-breakers this year. While the Falcons are still figuring things out, a win is a win is a win.

The Saints won again this past week, while the Colts lost again. The Saints rode their veteran quarterback Drew Brees to a win against the Bears, while the Colts fell short by a point against the Bengals despite a great performance from the legendary leg of Adam Vinatieri. Then why are these two connected this week? Because both etched another mark into their already historic careers. Drew Brees threw his 6,000th pass, joining the exclusive club of Peyton Manning and Brett Farve at a faster pace than either. Vinatieri meanwhile tied Gary Anderson for second-most points scored all time. Another legendary moment for two legends of our time.

The Patriots seemed to be mortal for a few weeks there. Now? Not so much. The Patriots have only allowed 51 points in their past four games, compared to the 121 allowed previous to that. The Patriots defense seemed to be the biggest issue holding them back Now? The Patriots beat the Chargers, moving to 6-2 and what seems to be another long run into January. The more things change, the more they stay the same. The Patriots always find a way to win.