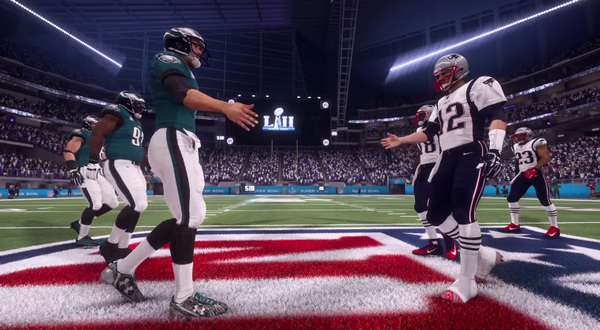 With the Super Bowl coming up this Sunday, to get into the spirit, I have decided to see how accurate Madden 18 will be if we simulate the game.  To ensure there is no controversy, I did not play as either team.  I simply had the AI play the game itself to capture the most accurate information.

For most of the first quarter, it was a tight game. Well, that was until a seven-yard Zach Ertz touchdown came from the back-up quarterback, Nick Foles.  With all of the momentum going towards the Eagles, they began the second quarter with a very difficult 55-yard field goal.  Now being down by 10, Tom Brady did what he does best, and drove the length of the field.  To cap off the drive, Brady had a one-yard keeper right up the gut.

With the game cutting close, Nick Foles and the Eagles had an answer.  Zach Ertz caught a crazy jump ball over two defenders for his second touchdown grab of the day.  After a very risky throw by the Patriots, the Eagles got the ball with decent field position.  However, they didn’t need many plays to get to the end zone, thanks to a big 43-yard run by former Patriot running back, LeGarrette Blount.  With the first half winding down, Alshon Jeffery would make his first catch of the game with a 15-yard monster touchdown.  New England’s struggling offense had failed to get into the end zone at the end of the half, so they had to settle for a 49-yard field goal by Stephen Gostkowski.  Philadelphia was definitely flying high going into the half, with the score being 24-10.

The Patriots would have to pull off another comeback win, and they started the second half firing on all cylinders.  Dion Lewis would go on to have a beast third quarter, finding the end zone twice, putting the Pats right back into the game.  The Eagles offense began to slow down, only scoring three points in the quarter.  Still down, Brady would need to show up in this final quarter, like he has done so many times.  New England was rolling, ending their first drive with another kick by Gostkowski.

With the game on the line, one of the teams would need to make a big play.  Since the first half, the Eagles offense was never quite the same.  They were not able to put the ball in the end zone again.  Two minutes remain on the clock, and Brady and the Patriots were on the 11-yard line.  Tom Brady found Chris Hogan on a quick-in route to catch the game-winning pass while diving across the line.