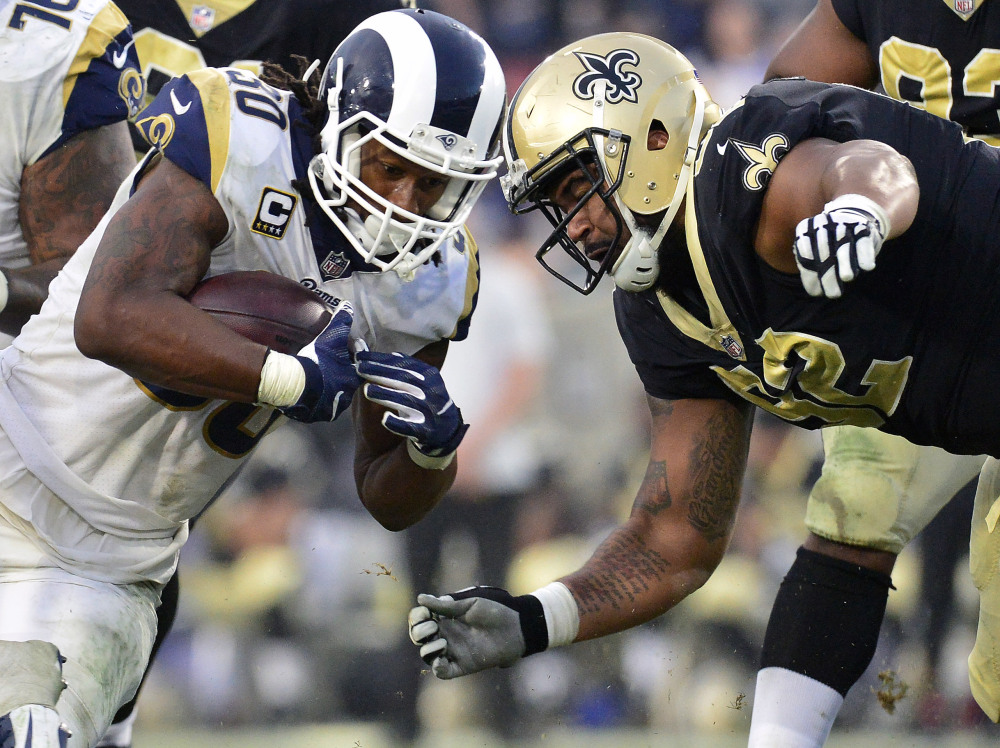 Even with Halloween in the rear view mirror, NFL fans are still in for a truck-sized treat this weekend. Two of the hottest teams in the NFL are set for a classic showdown in New Orleans with the New Orleans Saints taking on the Los Angeles Rams. The Saints are coming off a solid victory in a revenge game against the Minnesota Vikings. The Rams are rolling into NOLA at a perfect 8-0 after their tight victory over the dangerous Green Bay Packers last week. These two teams have combined to win 14 straight games coming into the weekend. This may be the preview of the NFC Championship game that will take place at the end of the campaign. Saints! Rams! Can I get a Hallelujah?

There’s no secret to why the Rams offense has been so prolific this season. Todd Gurley is playing at a different level right now. Gurley has touched the ball 200 times this season. He’s compiled 1,151 total yards through 8 games, racking up 15 total touchdowns. With his 200 touches, Gurley is averaging a ridiculous 5.75 yards per touch. He’s a multi-dimensional back that can hurt you in every way imaginable. He has found pay dirt in every game this season, including scoring multiple touchdowns in four different games. It’s quite difficult to find a way to slow him down at this point in the season. He’s not doing it all alone, but it’s easy to see that he’s been an absolute headache for opposing coaches to slow down. The Saints defense has some insight into how to slow down freakishly athletic backs, as they see their own Alvin Kamara on a daily basis, it’s a large task. Though, they’re going to have to figure out a way to slow Gurley down in order to get a win on Sunday.

With Gurley continually breaking defenses, Jared Goff’s success has been overlooked by some. Once considered a potential bust early in his career, Sean McVay has helped turn Goff into a real threat. With a slew of weapons on the edge, Goff is having his best season to date. With the addition of Brandin Cooks, along with Robert Woods, and Cooper Kupp, Goff has chucked the ball all over the gridiron. He’s racked up nearly 2,500 yards passing with 17 touchdowns to his name. If the Saints find a way to slow down Gurley, the Rams will lean on the arm of Goff to guide them to another Win.

The Saints have typically been a pass heavy team that tried to outscore opponents on a game by game basis. Their style has changed this season as they continue to have massive success utilizing their weapons out of the backfield. Alvin Kamara is no longer a secret. Mark Ingram II continues to provide a bruiser in the running game. With the two-headed monster in full effect, Drew Brees hasn’t had to throw the ball 50 times a game to lead the Saints offense. With the success on the ground, the Saints have been able to keep Brees upright and healthy as he hits the later years in his career. Without a doubt, Brees can still sling it. If the Rams are able to contain the two weapons in the backfield, Brees won’t hesitate to toss the rock all over the field.

With all of the success the Saints are having offensively, the Rams defense is in for a major test this week. Aaron Donald and the other members of the Rams front four will have to have a disruptive game to slow down the Saints. Donald leads the league in sacks with 10, despite being doubled for the majority of the snaps. Andrus Peat is a stud up front on the offensive line for the Saints, but he will need help to slow down this freak of nature in Donald. This match-up will be key on Sunday.

Packers wide receiver Devante Adams feasted last week against the Rams secondary, tallying over 130 yards receiving. The secondary doesn’t get an off week against the Saints as Michael Thomas will be featured in the passing game without a doubt. Thomas has been relatively quiet the past few weeks, but with a nice match-up on Sunday, expect Thomas to be featured a bit more in the passing game.

Sean McVay is an offensive genius. So is Sean Payton. The two coaches are both known for their offensive schemes and their innate ability to get the ball to their weapons. These two coaches will square off this week with their teams being on fire. Although this isn’t a match-up that takes place between the white lines, it’s still worth noting as we look ahead to the clash of heavy hitters this weekend.

Predicting a game of this magnitude is difficult. If one team gets rolling, we could be in store for a lop-sided victory. However, with both teams coming in so hot, its tough to imagine it will be a one-sided game. With the plethora of weapons on both sides, it’s easy to expect some sort of a shootout in NOLA.

Playing at home in front of a raucous crowd, the Saints will come out on top 34-31.