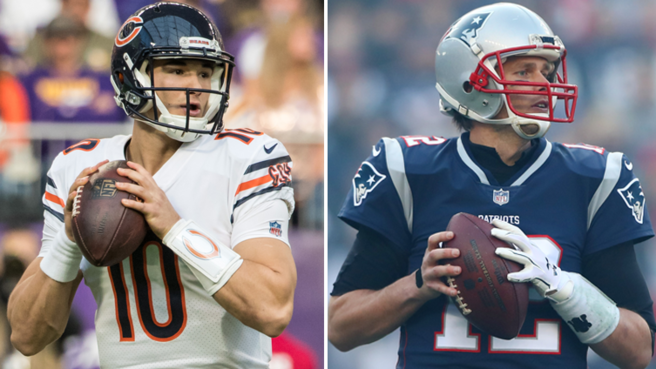 Week six featured some heavy-hitting match-ups, and issued a few surprises for NFL fans. Where is this relentless defense that guided Jacksonville to the AFC Championship last season? Who really is the best team in the AFC after the Chiefs suffered their first defeat of the season? Can anybody play well enough in all three phases to knock off the Los Angeles Rams?

Week seven features a few games that are intriguing, highlighted by the New England Patriots and the Chicago Bears. The Patriots put a stamp on their early season, with a big victory over the previously undefeated Kansas City Chiefs, outscoring the high-flying Chiefs offense by a score of 43-40. The Chicago Bears are a classic case of Jekyll and Hyde this year. They’re sitting at 3-2, but very feasibly could be 5-0 if they were able to finish the fourth quarter against the Packers and Dolphins. This match-up slates an up-and-coming team ready to make their mark on the NFL season, versus the perennial powerhouse in the AFC. Patriots vs. Bears. Who would have thought this would be the game of week seven at the start of the year?

Mitchell Trubisky had a lot to prove coming into the season, after a very vanilla 2017-18 campaign (7 TD, 7 INT, 12 games played). Can he really be the franchise quarterback that Chicago has been searching for? Over the past two weeks, Trubisky has been everything the Bears had hoped for. He’s thrown for 9 touchdowns to only one interception and has compiled 670 yards passing in that span. His flashes of being a legitimate threat are real. With that being said, he’s also failed to put together late drives in the two losses for the Bears this season. Even with his attacking defense in Chicago, Trubisky will have to lead the Bears offense into the endzone in order to compete with the Patriots this week.

Tarik Cohen has been an OW this season. Offensive Weapon. With Jordan Howard still getting the brunt of the work load, there’s no doubt that Cohen has made more of an impact on the Bears offense in far less touches than Howard. Cohen is averaging 5.3 yards per carry (32 carries, 170 yards, 1 TD) and is racking up over 12 yards a catch (21 catches, 259 yards, 1 TD, 12.3 YPC). Cohen is similar to James White for the Patriots. Both guys can leave a mark on the game with their ability to create big plays out of the backfield. Cohen will need to help Trubisky move the chains if the Bears want to compete with the Patriots high-flying offense.

After losing back-to-back games early in the season, the Patriots have rolled to three consecutive wins, headlined by the marquee win last week against Kansas City. Julian Edelman was suspended the first four games of the season, but made his return against the Indianapolis Colts in week 5. Tom Brady is accustomed to having a safety valve to move the chains down the field. Wes Welker started it and Edelman has been a key ploy in the Patriots offense over the past several seasons. In his two games since returning, Edelman has 11 catches for 111 yards and a touchdown. He requires attention underneath, which opens up the flood gates for Rob Gronkowski and Josh Gordon over the top. Edelman’s role cannot be understated, for the Patriots to continue to roll against the Chicago Bear defense.

The Patriot offensive line will have their hands full once again this week. The Bears have attacked their opponents for 18 sacks and 9 forced fumbles this season. Khalil Mack has been a Defensive Player of the Year candidate through six games. Although Brady has only been sacked eight times this season (1.33 sacks/game), numbers that are far less than the 35 times he was sacked last season (2.19 sacks/games), he will face pressure that he hasn’t been accustomed to. As previously stated, this is why Edelman will need to have a big week. Brady will be looking to get the ball out quick to his targets and will need to have his running game rolling to set up play action.

Sony Michel has been everything the Patriots had hoped for, after drafting him in the first round of the 2018 NFL Draft. He’s provided the thunder to the lightning the Patriots already had in James White. Michel is ninth in the league in rushing and has scored four touchdowns already this season. Averaging 4.4 yards per carry, he has given the Patriots some stability in the run game. Not only is he making an impact running the ball, he opens up the play action game with the threat of him moving the chains between the tackles. Michel will look to slow down the Bears pass rush with the running attack this week.

As a team that has struggled to win down the stretch, the Bears have a tough task ahead of them this week. The Pats are rolling. This isn’t going to change this week. Too much offense from the Patriots will lead to a 24-17 win this week.