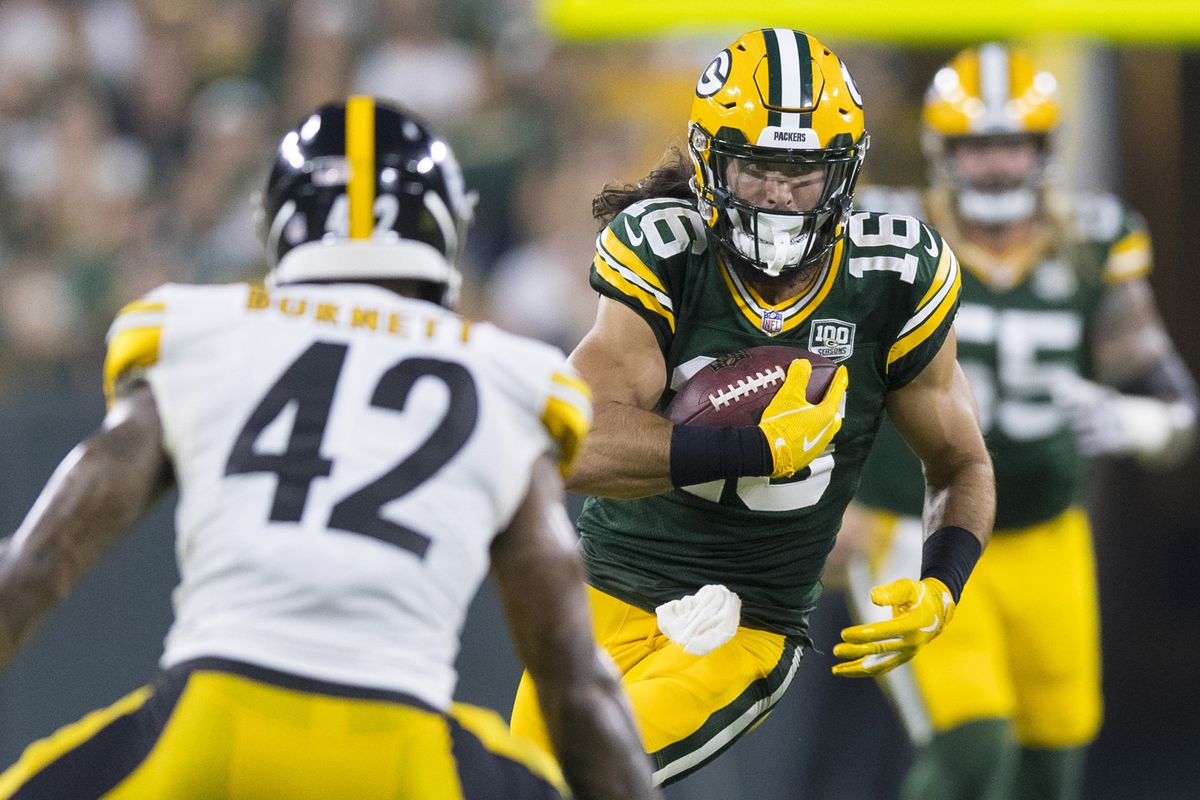 The Packers preseason continues to be a successful one. On Friday, August 16th, the Packers played the most beautiful game, as they hosted the Pittsburgh Steelers for an exhibition game in the second week of the 2018 NFL Preseason.

This game saw the Packers put up 51 points, the highest scoring preseason game for the Packers since 2010, when they scored 59 points against the Colts. While the game was very entertaining for Packers fans, it saw a very high number of players elevate their names and may have even locked up a spot on the 53 man roster. So let’s take a look at some Packers players who took the next step in their play and look to make contributions to the squad for the upcoming season.

The two catalysts for the amazing offensive performance are currently fighting out in camp to grab the QB2 spot on the roster, and it’s very obvious that both Kizer and Hundley are willing to fight to the death (probably not literally) for that title. Kizer, who was brought in from Cleveland as part of the Damarious Randall trade, has been dealing with expectations from fans to take Hundley’s back up QB title, but Hundley is not letting that title slip away.

As Brett Hundley first appeared versus Pittsburgh, he already started showing flashes that he can perform at a high level, throwing a rainbow to Jimmy Graham. While it was incomplete, it was still called for defensive interference. Not only that, but he also showed much-improved pocket awareness, scrambling out of the pocket and trying to make a play for himself, which even led to him rushing 10 yards for a Packers touchdown as well. When Kizer came in, he was still wowing the Lambeau crowd, going 7-12, 149 yards, and throwing 2 TD passes. He wanted to show that he’s also worthy of leading this team if his number was ever called. With these two combining for 226 yards and a completion percentage of 62%, we can only wait to see who will be backing up Aaron Rodgers come September.

It doesn’t matter if you compare him to Brett Swain or Jeff Janis, this man has made his mark in camp and made a case for his roster spot. The undrafted wide receiver form the University of Wisconsin-Whitewater has spent 2015-17 with the Bengals, primarily on the practice squad, plus brief stints with the Patriots’ and Packers’ practice squads since. He looks to have finally found a home in the NFL with the Green Bay Packers. A standout in camp, he showed the fans at Lambeau Field what he was capable of doing, as he burned multiple Steelers defenders on his 82-yard score from DeShone Kizer, showcasing his sneaky speed and quickness, totaling 114 yards in the game. While this all but locks up his spot on the active roster, he has shown that he belongs in the NFL.

You knew this name was going to be here. Stashed in the practice squad last year, Reggie Gilbert’s aggressiveness is comparable to one of a lion being released from his cage during a gladiator fight. The man is just simply a beast and it’s been on full display during the preseason. With all the trade talk in regards to Packers and Khalil Mack, it’s clear that Gilbert wants none of that, showing off with 2.5 sacks against Pittsburgh. Watching Reggie Gilbert grow in Mike Pettine’s system is going to be fun, as he will look to be a vital part of Green Bay’s new look defense in the 2018.

I’m officially sold on this guy and excited for him. Just like Gilbert, there has been talk in Green Bay as to adding a veteran of his position to the team, but Burks has shown that he can partner up with Blake Martinez just fine, anchoring the inside linebacker unit. Showing his hard-hitting skills on special teams and smart play of defense, he’s ready to becoming an important player for the Packers. Seen as a raw, athletic prospect out of Vanderbilt, Oren has proven that he can do more than just be an athletic freak, but also having great vision and being a ball hunter.

Another week of Jackson gloating his ball skills and intelligence, the man recorded a pick six, snatching the ball from Steelers WR Damoun Patterson. Playing tight coverage throughout the game, Josh Jackson is going into this season with tons of confidence and will make his name known with the many QBs in the NFL.

Rookie tight end from Indiana State may have caught only three passes, but quality over quantity. He caught a touchdown pass from DeShone Kizer, beating Steelers first-round rookie Terrell Edmunds in the end zone, using his size to do so. Tonyan also drew a pass interference call prior to his touchdown catch. With Jimmy Graham at the TE1 spot and Marcedes Lewis locking down the second, don’t be surprised if the coaches start seeing a battle between Tonyan and Lance Kendricks for the TE3 position, as we’ve seen a growing number of young tight ends blooming into the league.

Not much to say here but welcome back, Tramon. He intercepted Mason Rudolph’s first pass and took it home.

Tramon Williams with the PICK SIX on Mason Rudolph! pic.twitter.com/FRUtnBDba4

Why Each NFC North Fanbase Should be Excited