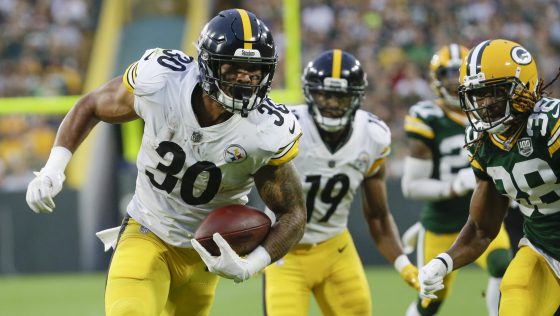 The Steelers used the second preseason game to see if quarterbacks Mason Rudolph and Josh Dobbs could push backup Landry Jones from the main backup role. What they showed was that they have a lot of work to do if they want to see action in the regular season. Each quarterback had their first pass returned for a pick-six. There were bright spots, however, in the 51-34 loss to the Packers. Let’s take a look at who fared well and who didn’t.

James Conner showed that maybe he can be a featured back in the NFL with a dominating performance in this game. He’s had a great training camp and looked great tonight on three fantastic rushes, making the Packers defense miss tackles. It was punctuated by a 26-yard touchdown run:

The Steelers have been bringing the second-round draft pick along slowly in training camp, even though he’s slated to have a major role in the Steelers offense. He has looked good in training camp and continued that with a great showing in this game. He had 5 receptions for 114 yards and 2 touchdowns. He might not have the speed Martavis Bryant has, but he’s shown excellence in making combat catches.

Veteran quarterbacks Ben Roethlisberger and Landry Jones sat out this game, which allowed third-round pick Mason Rudolph and second-year backup Joshua Dobbs to show if they could replace Jones as the main backup. What they did show is that Landry Jones will be the main backup this year, Rudolph is not ready and Dobbs might not make the team.

Mason Rudolph did not move the ball well in the first half, completing 5-of-12 passes for 47 yards, one touchdown, and one pick-six on his first pass:

Tramon Williams with the PICK SIX on Mason Rudolph! pic.twitter.com/FRUtnBDba4

Dobbs did a little better in the second half, completing 12-of-18 passes for 192 yards and a touchdown.  He also had a pick-six on his first pass.

First-round pick Terrell Edmunds started at free safety due to an injury to Sean Davis, and he did not look good. He was beat on touchdowns by tight ends Jimmy Graham and Ryan Tonyon. Edmunds has looked very good in his first training camp, but this game showed that he still has a lot to learn.

Packers Breakout Performers: Preseason Week 2
Why Each NFC West Fanbase Should be Excited for the 2018 Season