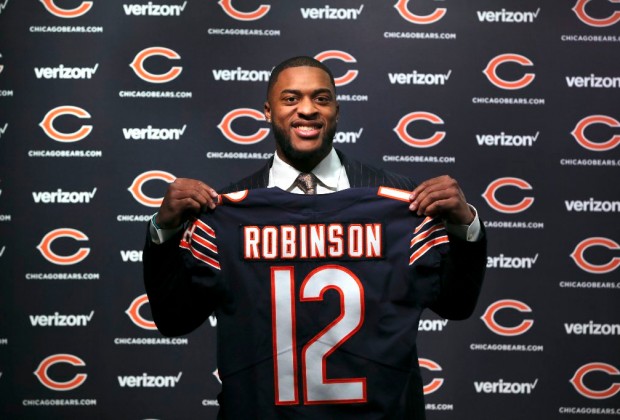 Keep in mind that free agency has just begun in the NFL, and teams may continue to make trades and deals in the coming weeks. Without further adieu, let’s check in on the NFC North’s notable activity so far…

The Chicago front office firmly believes that QB Mitchell Trubisky is the future of this team, and they’re planning to load him with weapons to compete not only in the NFC North, but the NFC conference.

Their major free agency acquisition has been signing former Jacksonville Jaguars wide receiver Allen Robinson to a three-year deal worth $42 million. Robinson was Blake Bortles’ top target during his tenure with the Jags; hauling in 22 touchdowns in his early career; however, Robinson is coming off an ACL injury that sidelined him all of the 2017 season.

With a true No. 1 at the WR position, Chicago is making sure Trubisky has a new toy to grow with.

But why stop there?

Chicago also signed speedy WR Taylor Gabriel for four years and $26 million. The WR has bounced around a few teams, but joining Chicago, which has had poor luck at the position in recent years *COUGH KEVIN WHITE COUGH*, it’s an immediate improvement.

Again … why stop there?

Chicago has also signed Super Bowl champion TE Trey Burton for four years worth $32 million. With Zach Miller’s gruesome injury, and Adam Shaheen being the only other producing TE, it’s a win for both sides that have been active in free agency so far.

Chicago has also signed journeyman QB Chase Daniels, just in case Trubisky suffers an injury. Plus with Mike Glennon released, it doesn’t hurt to have depth at the position.

The Detroit Lions haven’t opened the bank for any notable free agents so far, and have mostly retained players who were set to hit the open market.

LB Christian Jones comes over from the Bears on a two-year $7.75 million contract.

LB Devon Kennard signs with the Lions after playing for the Giants, for three-years and $18.75 million.

The Lions have met with veteran RB Frank Gore, but no deals have come of it yet.

The Packers are once again taking a risk at the TE position by signing Jimmy Graham to a three-year $30 million deal. After the debacle that was Martellus Bennett, the Packers are hoping the signing will give Aaron Rodgers an elite weapon who can use his size and speed.

The Packers have also signed Muhammad Wilkerson to a one-year, $5 million deal to help shore up the defensive line. Wilkerson signing should give a boost to teammates Mike Daniels, Clay Matthews and Nick Perry, and ultimately a defense that has had it’s problems for the better half of a decade.

Lastly, the Packers are bringing in competition for the backup spot by trading away CB Damarious Randall to Cleveland for QB DeShone Kizer. Brett Hundley failed to keep the Packers in contention, and with another QB in the mixup for the No. 2 spot, it’s a bright spot to groom both QBs behind Rodgers.

The Minnesota Vikings got their man in Kirk Cousins after letting Sam Bradford, Teddy Bridgewater and Case Keenum explore other teams. Now with Cousins in the NFC North, the Vikings are banking on Cousins to stay a dominant force within the division and conference. Cousins is now the highest paid QB, at $84 million over three years.

Which moves are you most excited about made by the NFC North so far?