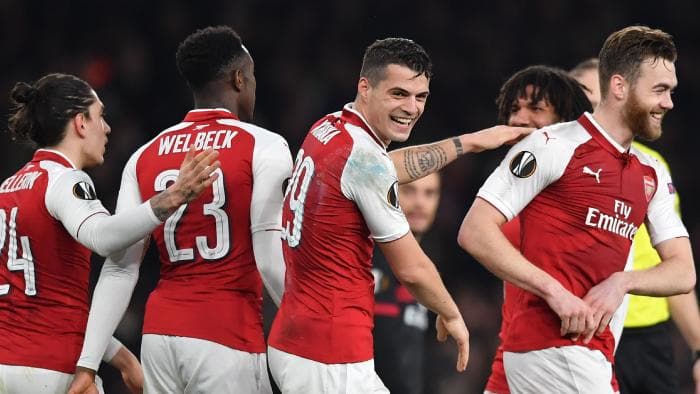 Last month, Arsenal manager Arsene Wenger joked that English players are the new masters of diving. Well on Thursday, a dive by Danny Welbeck has helped Arsenal into the Europa League quarter-finals.

Arsenal was heading back to the Emirates on Thursday with a 2-0 aggregate lead over A.C. Milan. All they needed was keep their cool over the Italian club and they would be one step closer to Europa glory.

A.C. Milan started out guns blazing with a point to prove. On the 35th minute, Hakan Çalhanoğlu scored an absolute screamer. The Turkish attacking midfielder launched the ball from 25 yards out that Arsenal goalkeeper David Ospina couldn’t save if his life depended on it.

Four minutes later Welbeck, who felt a minor touch from A.C Milan’s Ricardo Rodriguez, fell inside the penalty box with some theatrics. Perhaps he was watching some Michael Phelps diving videos the night prior? Who knows.

The referee surprisingly awarded Arsenal with a penalty despite video replays of no major contact was shown. Welbeck took the penalty and Arsenal were now tied.

After the game, Wenger claimed that he hadn’t seen replays of Welbeck’s dive and he would address the situation soon.

During the second-half, Granit Xhaka added his name to the scoresheet in the 71st minute with a long-range goal that the rising Italian star Gianluigi Donnarumma failed to stop. Welbeck earned his double of the night in the 86th minute with a headed goal. Arsenal won the game 3-1 and advanced to the last eight of the Europa League via a 5-1 aggregate win. This is the first time since 2003/2004 that Arsenal won both legs in a European knock-out stage.

Even with the misjudgment of the referee, Arsenal was still the better team out on the pitch. For instance, Mesut Özil had 60 passes and completed 54 of them. He also created six goalscoring chances that day.

Arsenal will resume play on April 1st in their Premier League game against Stoke City, while A.C. Milan will face A.C. ChievoVerona in Serie A on the 18th of March.