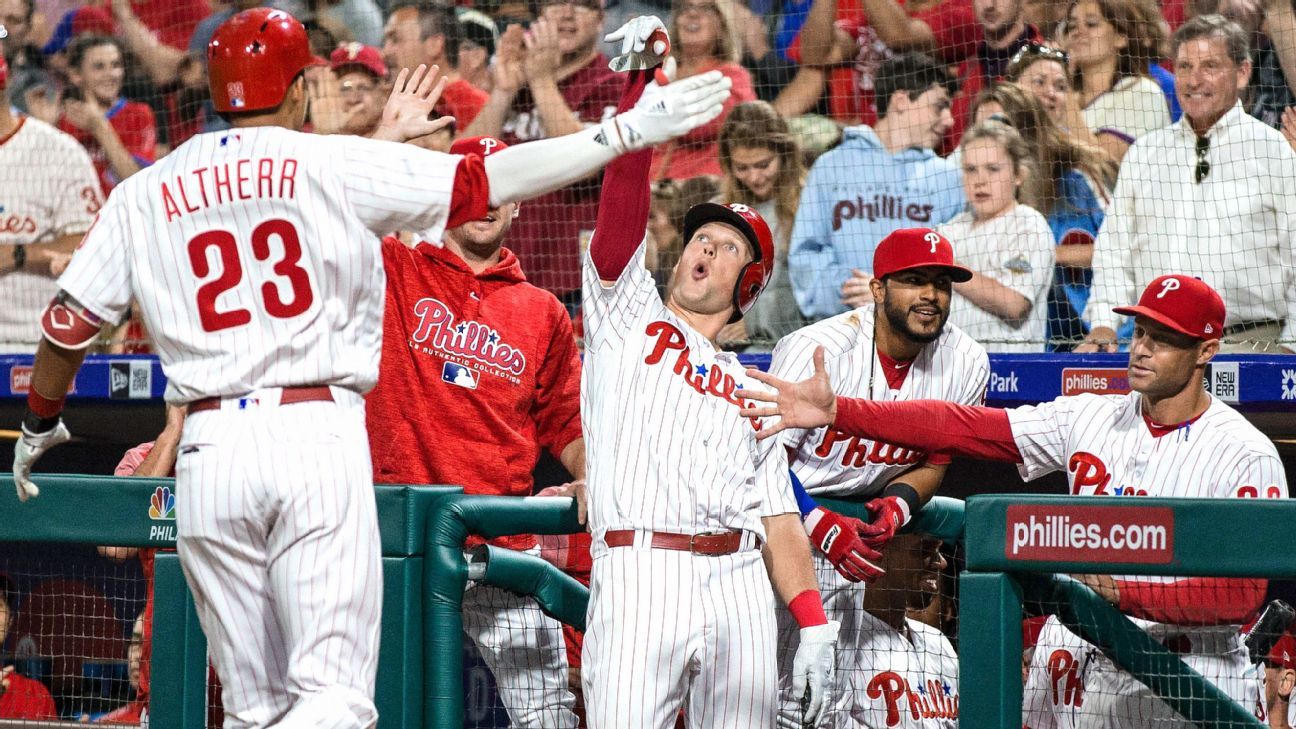 The first quarter of the 2018 MLB season has been full of surprises. The current standings of the NL East has caught baseball fans and casual observers alike off guard. No one could have anticipated the Atlanta Braves being in first place and the Washington Nationals three games behind them in third place. Chief among the surprises in the NL East would have to be the Philadelphia Phillies. The Phillies have more than exceeded expectations to this point, currently sitting in second place in their division and occupying the top Wild Card spot in the National League. It’s been a long rebuilding process in Philly the last seven years, but the young Phillies are threatening to make some noise in the National League playoffs.

Seattle was the center of baseball news last week, as Robinson Canó was handed an 80-game suspension for a violation of baseball’s joint drug agreement. Canó tested positive for a diuretic called furosemide, a substance often used to mask the use of performance-enhancing drugs. This will likely cause Canó to be out of action until August in addition to being ineligible to play in the postseason this year. On the bright side, the Mariners have won seven of their last ten games and will close out the month of May with a seven-game home stand.

Sure Washington was swept by the Dodgers, but missing four straight games due to inclement weather might have done enough to throw them off. Upcoming games against the Padres, Marlins, and Orioles should present the Nats ample opportunity to rattle off some wins and put up some gaudy numbers. Speaking of gaudy numbers, let’s talk about Max Scherzer. Scherzer is looking to lock up his third-straight Cy Young award, posting a 7-1 record with a 1.78 ERA and 104 strikeouts in only 65.2 innings pitched.

The $126 million man finally notched his first win this season. Yu Darvish allowed only one on two hits in six innings pitched in the Cubs’ 6-1 win over the Reds on Sunday. For Chicago, this hopefully means that Darvish will begin to perform as he has been paid, as he only averaged just under five innings pitched in his first seven starts this year. Despite Darvish’s slow start, the Cubs roster is one of the deepest in baseball, boasting top five production in terms of pitching and offense. If Chicago wants to win their third straight division title, they’re going to have to translate that production into more wins – Milwaukee isn’t going to wait for them to do so.

Pitching is king in St. Louis. The Cardinals have three starters who can go deep into a ballgame. Carlos Martínez (3-2 1.62 ERA), Miles Mikolas (6-0 2.24 ERA), and Michael Wacha (5-1 2.88 ERA) anchor a starting rotation that consistently keeps St. Louis in ballgames. If the Cards want to assert themselves in the NL Central, they have a chance to do that this weekend. St. Louis will hit the road to take on the Pirates and Brewers in a six-game road trip.

After starting the season with a 16-12 record in the months of March and April, the Phillies have continued their winning ways in the month of May. Going 11-7 so far this month, Philadelphia has kept pace with the first place Atlanta Braves in the NL East. Aaron Nola has apparently taken the next step in his development, so far posting a 6-2 record with a 2.37 ERA this season. It’s performances from him and the rest of Philadelphia’s pitching staff (3.43 team ERA – T-5th in MLB) that have the Phillies in a position to make a run at their first postseason berth since 2011.

You would be hard-pressed to find many teams that are playing better than the Milwaukee Brewers right now. Milwaukee is 13-6 so far in the month of May, including winning their last four series. Among Milwaukee’s surprise performers has been relief pitcher Josh Hader. In 17 relief appearances, Hader is 2-0 with a 1.23 ERA and 6 saves. What’s been most impressive is Hader’s ability to retire opposing hitters. In only 29.1 innings pitched, Hader has amassed 58 strikeouts while allowing an opponent batting average of only 0.086. Despite being a reliever, it’s not out of the question for Josh Hader to be in the Cy Young Award conversation if he keeps this up.

The young Atlanta Braves continue to surprise us all, currently leading the NL East. What’s been most impressive is their play on the road, going 18-9 in 27 road games this season. Ozzie Albies, Freddie Freeman, and Nick Markakis have spearheaded an offensive attack that is top five in both runs-scored per game (5.23 – 4th in MLB) and team batting average (0.264 – 2nd in MLB). I’d be remiss for not mentioning left-handed starting pitcher Sean Newcomb. In nine starts the 24 year-old has a 5-1 record with a 2.39 ERA.

Over one quarter of the way through the 2018 season and Houston’s lineup has been quite underwhelming. Last year, the Astros scored an average of 5.53 runs per game while batting 0.282 as a team. To this point, Houston has averaged only 4.73 runs-scored per game and is batting 0.257. The hallmark of this year’s Astros has been their pitching staff which, by a team ERA of 2.39, is the best in baseball. To put it into perspective, Dallas Keuchel has the worst ERA by a Houston starter at 3.43, which is lower than the team ERA of 23 teams.

The Red Sox have won five out of their last six games. Earning two wins in that stretch was starting pitcher Chris Sale. Sale is off to another impressive start in 2018, posting a 2.17 ERA and 0.91 WHIP with a 5-1 record in 11 starts. His 96 strikeouts are good for third-most by any pitcher and lead a squad that has struck out the second-most batters this season. Boston also boasts a top offense in terms of team batting average (0.269 – 1st in MLB), homeruns (70 – 2nd in MLB), and runs-scored per game (5.35 – 2nd in MLB).

Stop me if you’ve heard this before: the New York Yankees have the most powerful lineup in baseball. The Bronx Bombers lead the majors in both runs-scored per game (5.96) as well as in homeruns hit (75). It’s stretches like last week, where the Yankees hit at least four homeruns in three straight games, that add to New York’s mammoth offensive numbers. Their dominance will be challenged in the following week as the Yankees play host to both the Los Angeles Angels and the Houston Astros.