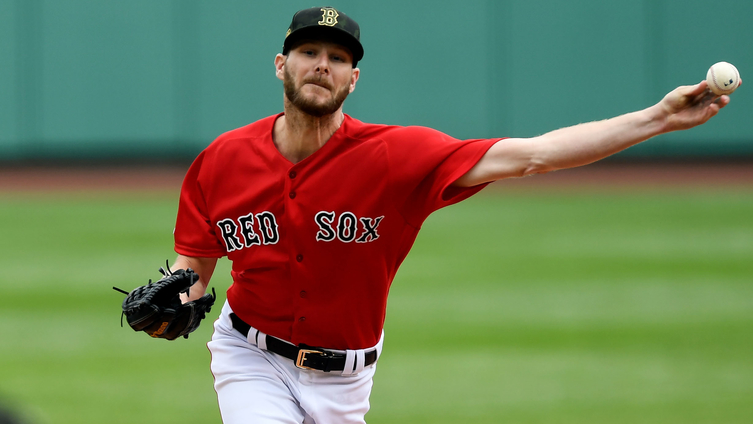 Hey Everyone, my name is Brandon Lauderback, better known as LumberjackDFS in the daily fantasy sports community. I am excited to be writing my first article for you all, and what better day to do so then on this massive Friday slate. In this breakdown, I will cover a few of my favorite pitchers to use, as well as my favorite pitchers to stack against, various hitters I like at each position, my home run predictions, and “Gem of the Day” which is a pitcher that I believe has the most upside given his match-up, strikeout ability, and various other aspects. Lets dive right in!

Not so very long ago, Sale was having an awful start to the season. However, he has been on fire for about a month now, and has returned to last seasons dominating form.

He now has a 2.74 xFIP, 35.7% K rate, 40.7% GB rate, and 38.1% HC. I will go over all of these numbers in various strategy articles for the coming weeks, but for now I will tell you those are good numbers to use when looking at pitchers. He will be at home, against a Toronto team that has a 26.6% K rate, and he will face six righties today, which only benefits his upside since he strikes out far more of them, compared to LHH. He uses his 4 Seam and Slider the most, mixing in the change, and sinker. The Slider, sinker, and change all generate over 50% GB to RHH, the 4 seam is getting over 40% whiffs per swing. The reason his fastball is so hard to hit, is because it moves over eight inches horizontally, and six inches vertically, at around 94 MPH. He is one of the only pitchers in Baseball with that kind of duel movement. This TOR lineup also struggles to hit Sliders, and his is elite. I fully expect him to be one of the more popular pitchers on the day, and Sale should be considered in all formats as the top arm.

This is an excellent pivot off of Sale for GPP’s tonight. Bauer pitched an amazing game against this same Detroit team on the road in his last outing. Now, he gets them again at home, where I fully expect a similar performance.

His xFIP is a little higher at 4.33, 25.9% K rate, 41.7% GB rate, and 37.7% HC. Bauer has struggled with LHH this year. but today he will only face 3 of them. Against RHH his K rate jumps to 30%, and 46% GB with only a .142 ISO. DET strikes out around 26% of the time, and overall just do not hit the ball well. He has increased his cutter and slider usage to around 30% while decreasing the 4 seam. This is a good thing because the fastball was giving up bigger ISO, and fly-ball numbers. Both of those pitches are getting good whiffs, and GB numbers. His Slider is nasty, it moves over 11 inches horizontally, and DET is another team that struggles to hit sliders. Put it simply, Bauer has just as much upside as Sale, at less ownership, in a better match-up, at a slight discount.

It has been an up and down year for the Philly Ace. He has unfortunately had more downs than ups, which is why we are getting him at a major discount today. Miami is a team that you should be targeting on a regular basis due to that fact that they just do not have hitters that can generate power. As a unit against RHP, they have a 52.2% GB rate, 23.4% K rate, and not one player has a .200 ISO. Nola will face seven righties where his K rate drops slightly, but he has a better ISO and almost 50% GB, and only 23% FB. This team cant put the ball in the air, which only helps him. Nola uses his Curve and 4 seam the most, mixing in the change and sinker. The curve has been declining in whiffs which I don’t like, but it’s still getting over 50% GB. I will have interest in Nola since he seems safe in this matchup, and can get you some better bats.

This will be the last pitcher I will mention to use today, and he is a value play meant for GPP’s only. The Padres have been better as of late, but they still struggle to hit RHP. With a 26.6% K rate, and 47.5% GB rate. Joe has much better stats against righties where he will see 6 of them today,. He has a .142 ISO, 22.5% K rate, 43.2% GB, and 39.3% HC. He uses the 4 seam and sinker the most, mixing in the slider and curve. One thing I like is his breaking pitches are both getting massive whiffs on RHH. Even the 4 seam had 38% whiffs recently. Since this lineup struggles to hit sinkers, and sliders, he could be a sneaky good play in tourneys today.

LAA – Michael Wacha is pitching for the Cards, and the Angles have been red hot. Wacha gives up power to both sides of the plate, a higher ISO to RHH, but more FB to LHH. My preferred method here would be to pick guys like Trout, and Upton who can put the ball in the air, and Ohtani, Calhoun, and Tommy Le Stella, who have more power. Bour is also a cheap way to get exposure in this matchup.

TEX – Summer in Texas is almost as good as Coors field, and these TEX bats get a great match-up with Lopez. I want Lefties because he gives up more FB and strikes out less of them. These bats are a little cheaper as well, if you are paying up. Choo is my favorite play, but is more expensive. Odor is a cheap 2B and while he strikes out a lot, he can also hit a lot of home runs. Calhoun and Cabrera are great as well, and lastly Guzman if he is playing is another cheap bat that will see virtually no ownership, but has some HR upside.

CHW – The other side of this game is also in play as Jurado is starting for Texas. This team also has one of the worse bullpens in Baseball, so you will get a chance at your stack going off in the later innings as well. You want righties who strikeout a little bit less, but can hit more FB, and virtually any power lefty, Moncada is always a great play, high FB and HC numbers, and will not strikeout as much today. Jose Abreu and Jimenez strikeout more, but both can hit the ball hard, and put it in the air. Tim Anderson is a sneaky play for cheaper, and Alonso would round out my interest from them.

ARZ – This is possibly my favorite stack on the day. Samardzija is not a good pitcher, and is in a horrible ball park. His numbers are worse to LHH , but are not much better to RHH. Everyone is in play, but my favorite bats are Escobar, Peralta, Jones, Marte, and Dyson in that order.

TBR – The last stack I will mention, the Rays are always in play against RHP. In a small sample size, Anderson has given up a massive ISO and HC to LHH. You want lefties that can put the ball in the air, Austin Meadows is my top play. Followed by Lowe, Choi, and Kiemaier would be my last play.

Gem of the Day – Bauer