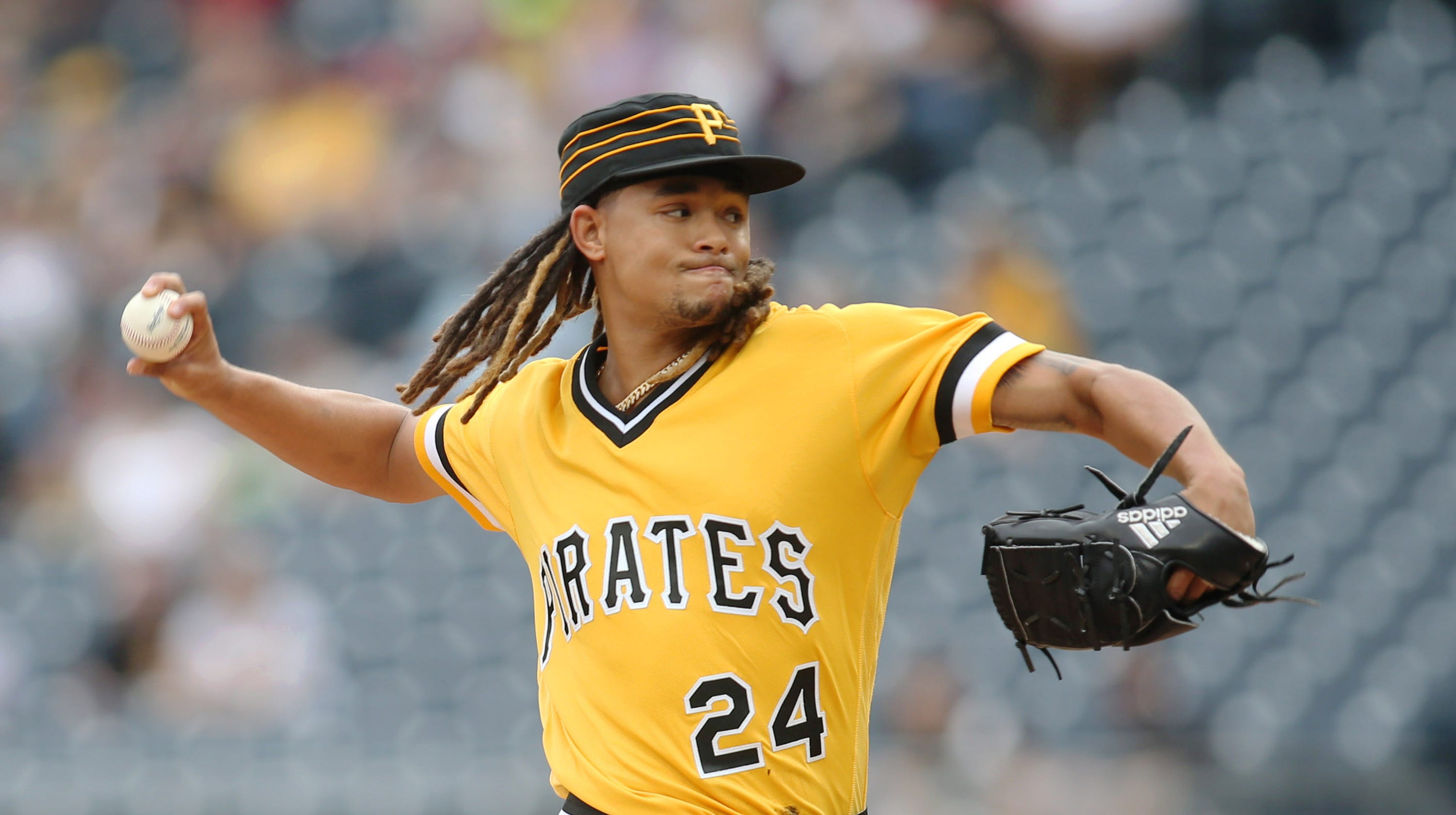 For today’s article, I am going to keep the same format as yesterday, except I will be adding a new feature to my pitchers and stacks that I like. I will be ranking each of my arms and stacks on a scale from one to ten. This is something that you can use to better gauge how much I like each pitcher, or what stack that I may like the most. Let get to it!

Yesterday, we had some massive success with Joe Musgrove in this same exact spot, so why not go right back to the well again today. Archer had been getting lit up early on in the season, however, he has slowly been getting better. I mentioned yesterday the Padres have a 27% K rate to RHP, along with a 45% GB rate. Archer is better against RHH, slightly lower ISO, 43.6% GB rate, 40% HC and still at a 22.5% K rate.

Here is the biggest reason I am on Archer today. This Padres unit really can not hit sliders, I mentioned this same exact thing with Musgrove. They have high whiff rates around 40% overall, low ISO at around .176, with a lot of GB. Archer uses the slider 43% of the time to RHH. He uses the fastball 46% of the time, mixing the sinker and change rarely. His slider gets 43% whiff per swing, and 44% GB. The velo is solid, at 89 MPH, and the movement is around 3 inches which is average for the slider. I have a lot of interest in Archer, and he is a very strong play for your cash games.

This is a very young pitcher, in one of the best pitching programs in all of baseball. While Miami may struggle with the hitting portion of their team, they have some really strong young pitchers, and this coaching staff does a great job at developing these young arms.

Why do I like Hernandez against a Philly team with a ton of power? Elieser will face six RHH, where he has dominated. The ISO is .086, 30% K rate, unfortunately a lot of FB at 56%, but he gives up way less HC at 32%. He is fastball and slider heavy, with a change as well. This kid has a nasty slider, getting way over 50% whiffs in this small sample, the fastball and change get decent GB at around 35% each, and very low ISO numbers on each pitch type. This slider is a very special pitch. I am not sure how he managed to post duel movement numbers on it, but it moves vertically around five inches, and horizontally six inches. Philly is pretty similar to the Padres, where they struggle against sliders, overall a low ISO around .165, decent whiffs at about 35%, and about 47% GB. I like Hernandez as a very low owned, high upside GPP play.

For me, I will be torn between Archer and Chironos. For some reason, FD has yet to raise this man’s price, as he still sits at $6.5k. On DK, he is around $10k, which means he is not in play over there. He strikes out slightly more LHH, at 23%, but has a better GB rate to RHH at 44.3%, and very low HC 27.5%. Yonny played Oakland recently scoring 37 FD points, and striking out seven batter. Oakland hits a lot of GB, and they can be strikeout prone at times.

This is also a great park to pitch in, and is about just as good as his home ballpark at Tropicana Field. Chironos is sinker heavy, with a slider and splitter mostly used on LHH. That splitter gets 50% whiffs — remind you of anyone that just got suspended for 80 games? RIP Frankie Montas. Anyway, the slider has seen an increase in whiffs each month, now sitting at 38%. The sinker gets over 50% GB and Oakland, as a unit, hits around 55% GB to the sinker. The more notable things are his Slider has increased in horizontal movement from last year by almost two inches, while maintaining the same velocity. Oakland struggles with the Slider as well hitting about 47% GB and an ISO around .188. See a trend with today’s pitchers yet? Chironos is firmly in play for all formats, and at that price tag he may the highest point per dollar arm on the slate.

PIT – Yes, I am going to play some Pirates against Paddack. He is not the same pitcher that he was earlier in the year. The Padres sent him to the minors to “monitor his innings.” His once great fastball is giving up a .375 ISO to LHH, the change has a .333 ISO as well. The whiffs are way down on both pitches, at around 12%. I want LHH who have a high FB rate. Corey Dickerson will be a great play. Jordan Bell, followed by Moran, Polanco (if he plays), then Reynolds due to his high HC 53.1%. All of these players have good numbers against his fastball. Dickerson is solid against the Change as well.

BOS – Law will open up the game for Toronto, but Gaviglio will throw the majority of the innings coming in after Law. He has a high ISO to both sides of the plate, and that does not bode well for him against a Boston lineup that is stacked on both sides. He does strikeout way more righties, at a 28% rate, compared to 16% lefties. LHH also have a 47% FB and HC rate which means more XBH and home runs. LHHs are crushing his two main pitches, the slider and sinker. Both have a high ISO and FB rate. Benintendi and JBJ hit those pitches with good success, and would be my top plays in that stack. RHH are destroying the Slider, he uses it a lot to them so I want to play any righty who can hit that pitch well. JD, Chavis, then Betts. To summarize, I like in this order, Benintendi, JBJ, JD, Betts, Chavis.

TOR – This is a great spot to do a game stack. Johnson has been named the starter for today. His numbers are bad, to say the least. RHH have a massive .400 ISO, LHH have a .235, but they have a 53% FB and HC rate, which is horrible. RHH strikeout less, but have a 54.5% GB rate and a 50% HC rate. The lefties I will look at are Tellez and Sogard. Both of them smash his sastball and change. For RHH, I want guys who can put the ball in the air. Teoscar Hernandez comes to mind. He also destroys Johnson’s fastball, which has been giving up big numbers to both sides of the plate. I like them in this order: Sogard, Teoscar, Tellez, Grichuk, Galvis.

CLE – Spencer Turnbull has been much worse since returning from his injury. The Indians are loaded with LHH, and his numbers to them are a .169 ISO, 15.9% K rate, 46% GB, and 36.2% HC. Doesn’t look that bad, right? Let’s check out his pitch mix. Turnbull is fastball heavy, mixing in his slider, sinker and curve. Low whiffs on everything, the slider has been giving up more FB. His fastball is getting decent numbers, but I think he is getting more lucky with it than anything. It moves five inches, which is terrible, even at 94 MPH. The best fastball hitters are as follows: J Ram, Kipnis, Santana, Bauers. After reviewing all of the pitch types, I rank the players in the stack Kipnis, J Ram, Bauers, Lindor, Naquin.

*I just wanted to make this note before I move on. I am not attacking Hess. He has been pitching much better and is a reverse splits guy. The Mariners do not have many righties anymore, but as a one-off, I would like Danny Santana, who has been crushing the ball all year. I would not be surprised if he went deep today on Hess.

Gem of the Day – Yonny Chironos