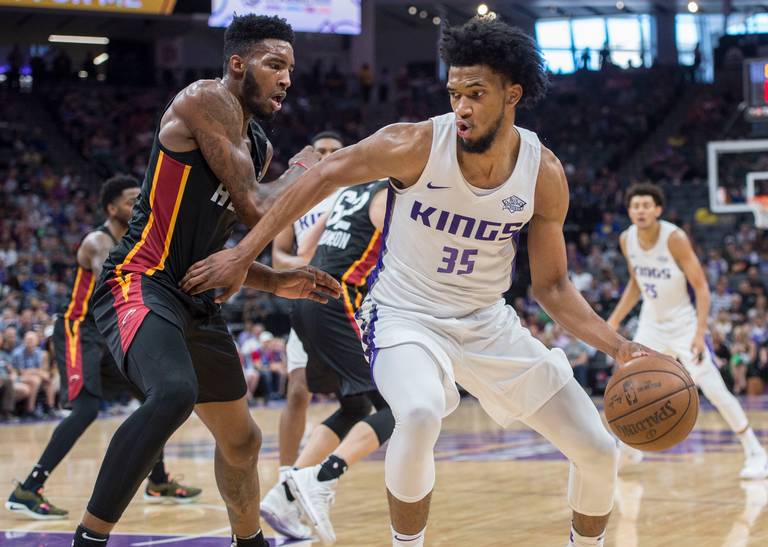 Marvin Bagley III played 29 minutes in Thursday’s game against the Heat, but he only managed 1 point, 3 rebounds, and a block. Physically, Bagley III looked defeated against his counterpart Bam Adebayo when the Kings were on offense, as Bagley III didn’t seem to get nearly as many touches on account of Adebayo’s defense. Mentally, Bagley III looked defeated on the defensive end as well, since he was physically dominated by Miami’s big men and simply beaten by their guards.

Adebayo put up a solid 14 points and 9 rebounds, including one incredibly difficult alley-oop that Adebayo seemed to try and just tip towards the rim as a result of the pass being too far in front of him. He looked fresh and was able to score both down low and from midrange. I don’t want to speculate on why Bagley III’s performance was so lackluster, as it could be many things; coach wanting to see Bagley III involve others, July 5th hangover, or maybe it was just simply not Bagley III’s night. After all, it is just his third ever NBA game, and at this point, he is allowed to struggle. With DeAndre Ayton and the Phoenix Suns as the next game on the schedule for Saturday, Bagley III better be ready.

Derrick Jones Jr. led his team in scoring for the third straight game, pouring in 19 points and posting 7 rebounds. Four of those points came off of some MONSTER dunks by Jones Jr. After this performance, Jones is now averaging 21.3 points per game and is looking like he will be a very good scoring option for the Heat this season off the bench or starting if there is an injury. Derrick Jones Jr.’s three ball wasn’t working for him early and he finished the game 0-3 from downtown, but he adjusted well and found the free throw line five different times and made 5-10. If Derrick Jones Jr. can find more consistency shooting the ball and couple it with his ability to attack the rim, he will be a very good player for the Heat.