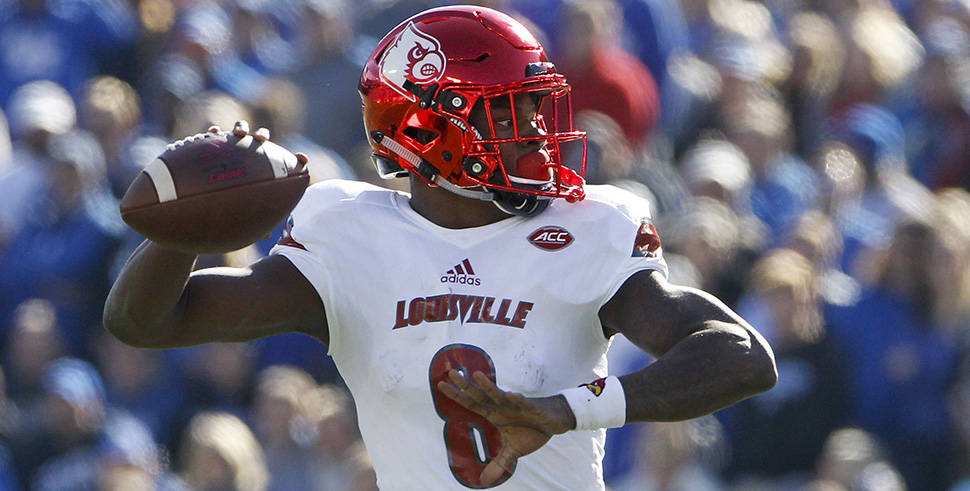 In preparing to write my opinion about the top quarterbacks in this year’s draft, I wanted to watch every throw from two-to-three games. For Lamar Jackson, I watched the 35-28 Week 1 win over Purdue and the blowout loss to Clemson. My reasoning behind choosing these games was for the simple fact of competition. Purdue finished the season 7-6 with a win in the Foster Farms Bowl. Clemson went to playoffs and beat five ranked opponents throughout the season.

The thing you see immediately with Lamar Jackson is his athleticism. I hate making this comparison, but he is Michael Vick 2.0.  Jackson’s ability to scramble and be the ball carrier on designed QB runs/options has only been seen by guys like Mike Vick, Cam Newton, Russell Wilson, Tyrod Taylor, and Colin Kaepernick in the recent NFL. Jackson doesn’t typically slide as a runner. You can look at his lack of sliding as a positive and a negative. The positive being he can make bigger plays, while the negative being he could get beat up going against stronger NFL players.

I have concerns about his durability. He has not missed a game in college, and above in the list of strengths and weaknesses I have “durability” in both categories. Lamar Jackson only weighs 216 pounds. He can make his weight work in the NFL if he learns how to slide and not take unnecessary hits. Jackson also has the best escapability of any quarterbacks in this draft. He is never a sure sack, and can extend plays with his feet and make throws downfield as the play breaks down or use his athleticism and run for a big gain.

One of Lamar Jackson’s best attributes is his arm strength. When watching tape, I felt on throws where he was comfortable he could flick his arm and the ball would fly out of his hand. On the contrary, when he made throws he didn’t feel as comfortable with, it seemed as though he would try to guide the ball, which would take some heat off the ball.

The thing that is hurting Jackson’s stock the most is his inconsistency. In Louisville’s week 1 win over Purdue, I watched every throw he made and I finished the game with nine negative notes. Seven of which were concerning his footwork (EX: 7:34 4th quarter- “feet are cemented to the ground, misses stick route low. Didn’t natural step into throw in a three step drop, also didn’t drive through the throw.) The stats look good, but you don’t see the true Lamar Jackson until you watch the game film. In the blowout loss to Clemson, Jackson played one of his worst games of his career. He was constantly throwing off balance, had cemented feet, and relied on his arm strength way too much. To give him some credit, at this point in the season, Clemson blew Louisville out of the water in terms of talent and skill.

All in all, I think Jackson definitely needs time to sit behind a veteran guy like a Ben Roethlisberger/Drew Brees. I think his mechanics and technique needs to improve vastly if he wants to make it in the NFL. If Jackson can get his footwork consistent and improve his decision-making, he could have a chance to be a very special player at the next level. His athleticism sets him apart from almost every quarterback in today’s NFL. I currently have Jackson ranked fifth out of the top five guys in this year’s draft.  Jackson has the lowest floor, but the highest ceiling of all guys in this draft class. I believe he has the biggest bust potential and will either be a great quarterback, or looking for a job before he is 25.