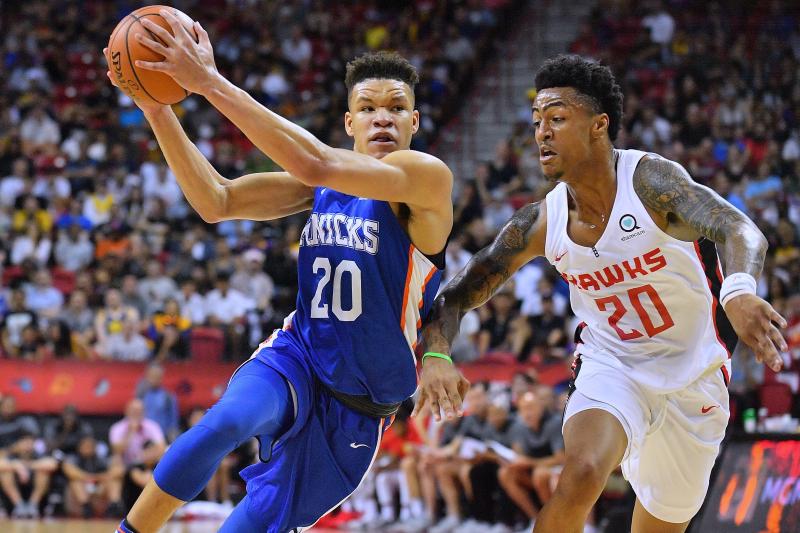 The Atlanta Hawks showed improvement, but remain winless in four NBA Summer League games so far. The team went 0-3 in the Utah Summer League before dropping its first game in Vegas earlier today. Trae Young and company played better, and more cohesively, but the New York Knicks proved too much. Led by a combination of experience and youthful talent, the Knicks turned in an impressive NBA Summer League debut that ended in a 91-89 victory.

The Atlanta Hawks probably do not care too much about winning during NBA Summer League. While no one likes losing, the Summer League is more for establishing rapport and finding potential diamonds in the rough. In that sense, the team’s loss to the Knicks may actually be viewed as a major victory for the franchise.

John Collins was probably the Hawks’ second-best player as a rookie in 2017-18. The uber-athletic power forward impressed in Atlanta despite the team as a whole struggling quite a bit. The Wake Forest alum led the Hawks in scoring with a monstrous 30 points and 8 rebounds. He shot a lights out 4-7 from three (57.1%) and had more than one electrifying dunk in the game. Most importantly, the two-man game between Collins and rookie point guard Trae Young throughout the game was a thing of beauty.

Young had a solid offensive game himself. Despite the continuation of his shooting woes, Young dropped his summer-high of 21 points. More importantly, the former collegiate star dealt out 11 assists, including several prime dimes to Collins. Young had yet to really show off his passing ability this summer, and the fantastic facilitation against the Knicks should give Hawks fans something to really be excited about.

Knicks fans were incredibly outspoken about their displeasure with the 9th overall selection of Kevin Knox. When asked about the boos on draft night, Knox remained positive and stated he would use it as motivation. The young Knick seemed to bring that type of mentality to his NBA Summer League debut.

Knox led the Knicks in scoring with 22 points on 8-20 shooting (40%). He also managed 8 rebounds, a steal and a block for the game. The shooting efficiency should improve with time, and it was undeniable the Knox has a wide variety of offensive moves. He scored off the dribble, from the perimeter, and got to the foul line where he was 5-8.

Also playing with a chip on his shoulder was center Mitchell Robinson. Robinson, who had a bit of a tumultuous path to this point in his career, was active throughout the game. The most impressive aspect of Robinson’s performance was his defensive range, showing an ability to show on guards or switch on screens and still recover quickly. While defensive range is not something that will show up in the box score, Robinson’s statistical contributions were not too shabby either. The young big scored 9 points on 50% shooting to go along with 8 rebounds and 4 blocks. Although Collins scored 30 points for Atlanta, the individual battles between Robinson and Collins were one of the highlights of the game.