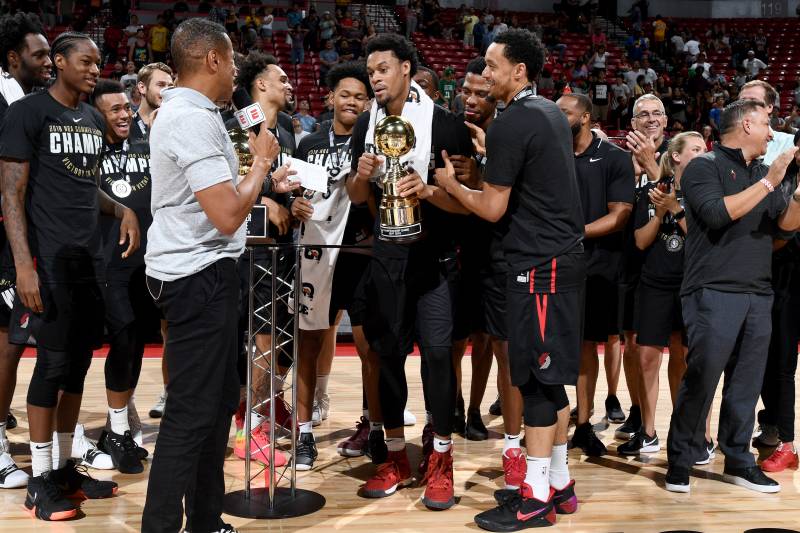 KJ McDaniels’ NBA career has not gone as he planned to date. After starting off in Philadelphia, where his electric blocks and dunks made him a fan-favorite, he has bounced around the league. The 2014 ACC Defensive Player of the Year has talent, but also some very clear limitations. He certainly has a place somewhere in the league, but it’ll take a little luck finding where that is….until now?

KJ McDaniels won the Summer League Finals MVP Tuesday night in Portland’s 91-73 drubbing of the Los Angeles Lakers. While McDaniels did not play much at all early in the Summer League, that should not be seen as an indictment of any kind. With NBA experience, the former Clemson star has already assembled a decent sample size, albeit predominantly in “garbage time.”

Portland likely was saving McDaniels to see what he would do later in the Summer League. A player with even slight NBA experience would probably dominant against the weaker Summer League teams. That was true for Portland’s own Wade Baldwin IV, Denver’s Monte Morris, and Utah’s Georges Niang. For McDaniels to prove anything, he would have to do it when it really counted. Tuesday night, he did just that.

The high-flying McDaniels only played 20 minutes in the win, yet still managed the MVP. He led all players in scoring with 17 points. The swingman also led all players with eight made field goals (8-14, 57.1%). The powerful dunks that had his career off to a surprising start in Philadelphia were present as well.

Defensively, the entire Portland team excelled. Guard Josh Hart and forward Svi Mykhailiuk, two of the most impressive Summer League Lakers, were held to 6-22 shooting combined (27.3%). McDaniels himself was stout on defense. He displayed his athleticism with an emphatic block of Hart that saw the ball caught by a member of the Blazers’ bench.

Portland is a team with low roster flexibility due to cap issues. The team is desperate for any improvements to the roster that can come cheap enough for the team to make it work. McDaniels could be an interesting option, especially considering Portland’s extreme lack of production on the wing. He may not ever be the star he was at Clemson, but given the chance, he might still be a solid NBA player yet.

Josh Hart was arguably the best player in all of 2018 Summer League. He scored 37 points in the Semifinals win over the Cleveland Cavaliers. He gained valuable NBA experience as a rookie in 2017, and has a bright future in the NBA should his path continue on its current trajectory. That said, everyone has an off-night sometimes, even the very best.

Tuesday night was one of Hart’s off-nights. Thankfully it was only the Summer League Final, something more about development and player pride than anything else. The poor showing in the loss will likely be a total afterthought for Hart and Laker Nation by the end of the week. Of course, that does not change the outcome of the game.

The Lakers’ fearless leader had possibly his worst outing of the Summer. He managed only 12 points on 3-12 shooting from the field (25.0%). Hart missed all six of his three-point attempts and was a pedestrian 6-9 (66.6%) from the foul line. The nine free throw attempts are noteworthy, as it indicates Hart did not lack aggression or shy away from the ball despite struggling. That demonstration of a shooter’s mentality was a bright spot for Hart in the losing effort.

All in all, the loss and poor performance mean very little for Hart and the Lakers. The team does still have LeBron James, and Hart does seem to at the very least be a key bench piece moving forward. The blowout loss should be a bit of a humbling moment for Hart and point out a few aspects of his game he can continue working on to build on his massive success before the Summer League Final. While the Lakers lost one battle, they certainly did not lose any wars.