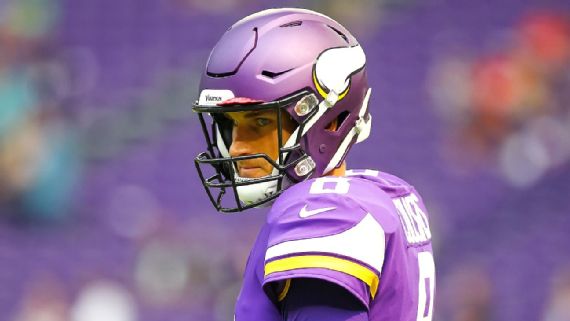 With the new season officially underway, the Minnesota Vikings were back in action at U.S. Bank Stadium for the first time since their walk-off miracle touchdown against the New Orleans Saints. San Francisco came to town hoping to build off of their five straight victories to finish the campaign last year behind newly signed quarterback Jimmy Garoppolo. On the other side, Kirk Cousins was making his debut in purple. Both teams have high expectations for themselves for this new season, as they kicked off on Sunday.

The new man directing the offense in Minnesota was their big offseason signing in Kirk Cousins. With holes on the offensive line, running back Dalvin Cook coming off of knee surgery, and Cousins entering a new scheme, there were many questions looking to be answered heading into week one.

Cousins didn’t wait long before making an impact. With some immediate pressure in his face, he distributed the ball to all of his targets in the first half. Dalvin Cook was the recipient of some quick dump-offs from the backfield, Adam Thielen found some area across the middle, and Stefon Diggs was out working the edges. Early in the second quarter, Cousins dropped an absolute dime over the shoulder of Diggs for a 22-yard touchdown pass to give the Vikings an early 10-0 lead. With all of the stats racked up, the first half was fairly disappointing for the purple and gold, only putting up 10 points. Cousins was 14/20 for 165 yards and a touchdown. He rushed the ball three times for 22 yards, but was sacked twice as well.

Stefon Diggs with the nice move on Richard Sherman pic.twitter.com/QdpRydd0K2

Starting the second half, the 49ers offense was on the field for a good chunk of the 3rd quarter due to a pick six by Vikings rookie Mike Hughes that put the Vikings up 17-3. When Cousins took control again, the Vikings put together a methodical drive that was capped off by a Kyle Rudolph touchdown from 11 yards out to put the Vikings up 24-6. With that touchdown, it felt as if the Vikings had control of the game. However, with the 49ers offense turning it on, Cousins and the Vikings offense was unable to get much rolling into the 4th quarter. The Vikings defense was able to hold off a game-tying score to seal Cousins first win in a Viking uniform.

Rookie Mike Hughes picks off Jimmy G and takes it to the house! #PickSix #SFvsMIN pic.twitter.com/Hb5qUirkVq

There were many throws that give the Vikings reasons to be excited about their new face of the franchise.  Cousins finished the game 20/36 for 244 yards and a pair of touchdowns. The most important stat for Cousins was in the win-loss column. 1-0 is all Minnesota fans need to see as they head into a rivalry game next week with the dangerous Green Bay Packers.

Dalvin Cook looked to make a splash, returning from knee surgery that sidelined his promising rookie season. Cook touched the ball early and often in the first half, as the Vikings were not looking to slowly work him back into the offense. Despite a fumble that was lost in the second quarter, Cook demonstrated that explosiveness that was on display in his rookie season. Catching the ball out of the backfield was where the immediate impact was felt (4 catches for 53 yards in 1st half). He also proved his worth rushing the football, running through arm tackles on a beautiful run before he lost the football.

Cook was less involved in the 2nd half, only compiling 40 yards rushing on 16 carries in the game. Cook finished with 95 total yards on 22 touches in his first game back since his injury.

Bottom line is this: Cook looks healthy. He was cutting well, breaking tackles, moving well in open space, and most importantly, he was making an impact. The Vikings organization and fans should be encouraged by Cook’s debut in 2018.

The offensive line was the biggest question mark for the Vikings, heading into the game. Despite success running the ball early, pass protection continued to be an issue for the men up front. Cousins was sacked early and faced pressure on his dropbacks consistently. To say the Vikings line was porous today is far from reality though. The line had their fair share of issues, but Cousins was able to stand in the pocket when he needed to the most. The running back tandem of Cook and Latavius Murray only were able to run for 81 yards on 27 carries, but the Vikings offense racked up 115 yards total on the ground. The line will continue to be a work in progress as the seasons moves on, but there were plenty of positives to take with them from the season opener.

The offense knew coming in that they had a major test to open the season. The Vikings defense may have the most feared front four in the game, with stout linebackers and a physical secondary. Garoppolo saw two linemen leave the game due to injuries and saw plenty of purple jerseys in his face on his dropbacks. Jimmy was able to hit open targets down the field and was able to keep the 49ers in the game by throwing a dart to Dante Pettis for a 22-yard touchdown to cut the lead to 24-13. In a game that felt like the Vikings were dominating, the 49ers cut the lead to 8 points with over 8 minutes remaining in the game thanks to the third successful field goal by Robbie Gould. With 1:56 remaining in the 4th, the 49ers forced a punt and gave Garoppolo an opportunity to put together an 89-yard drive to put an exclamation point to start the season. The excitement was short lived, however, as Garoppolo was intercepted by Harrison Smith on the second play of the drive.

The offensive line was the major issue for the 49ers. Eight sacks were given up while only averaging 3.6 yards per carry. The offense did pick up some big plays in the passing game, but a fumble at the two-yard line and 3 interceptions thrown by Garoppolo was far too much to overcome.

All in all, the Vikings seemed to dominate much of the game, but never really took control on the scoreboard. The 49ers had opportunities late to really apply pressure on the Minnesota offense to make plays to win the game, versus relying on the defense to finish the job. The Vikings defense gave up big plays, but ultimately applied too much pressure and forced some much needed turnovers to win the opener 24-16.

The Vikings defense will be tested next week as they take on the Green Bay Packers and their prolific offense. The 49ers will take on another NFC North opponent in the Detroit Lions.