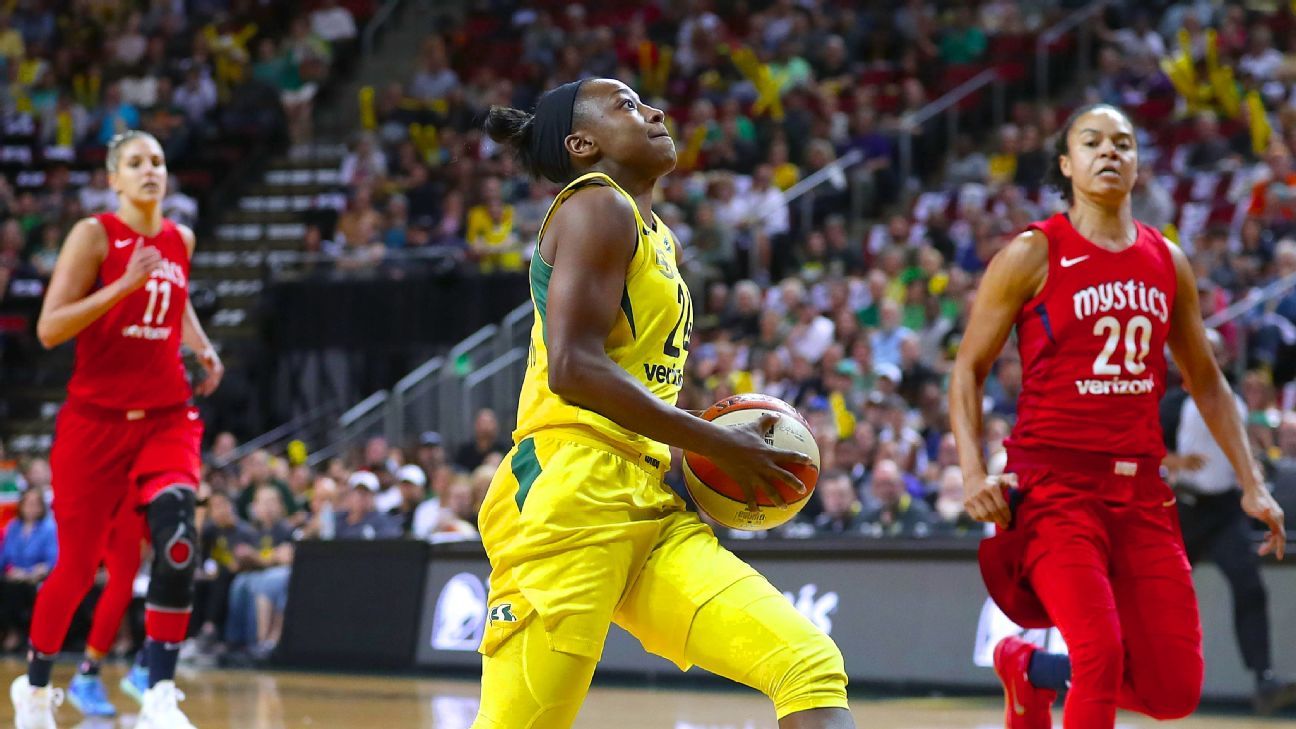 The 2018 WNBA Finals tipped off Friday night at KeyArena in Seattle, home of the number 1 overall seed Seattle Storm. A raucous home crowd enjoyed a Game 1 in which their Storm hardly ever relinquished momentum on their way to a comfortable 89-76 victory over the Washington Mystics and a 1-0 Finals lead.

Storm Get Up Early

Seattle jumped out of the gate quickly, leading by 11 at the end of the first quarter. The Mystics starters looked so flat in the early going that coach Mike Thibault went deep into his bench in the first half just trying to generate a spark and some energy. Washington hung around for most of the second quarter, but ultimately lost it again on the scoreboard, and the Storm were up 48-32 at the break. The game was essentially put out of reach in the third quarter. The Storm came out of the locker room playing as if they were the ones down by 16 and took a commanding 24-point lead into the fourth quarter. Washington did go on a short run with mostly reserves in on both sides, but they never seriously threatened.

Perhaps what was most remarkable about the Storm building such a large first half lead was that they did so without significant contributions from their two biggest stars, Breanna Stewart and Sue Bird. Stewart was scoreless from the field through the first 15 minutes of action, and Sue Bird only had one field goal and three assists in the whole first half. This just speaks to the shear depth of capable offensive talent that the Storm possess. It was evident to anyone watching the WNBA all season that Seattle was the deepest team in the league from an offensive standpoint. It earned them the best record and now has them just 2 wins away from the franchise’s first title since 2010.

Jewell Lloyd was the leading Seattle scorer on the night checking in with 23 points. She added 5 rebounds and 2 assists while also serving as the major catalyst of the Storm’s defensive intensity coming up with 3 steals. Stewart racked up 22 points, 5 assists, and 3 boards while playing a team-high 32 minutes. Natasha Howard was the third Storm player in double figures scoring with 19 points to go with 5 rebounds. Alysha Clark had a sound all-around performance with 8 points, 5 rebounds and 5 dimes. Bird only scored 4 points, but she made a big impact with her 7 assists.

The Mystics were led on offense by Ariel Atkins who scored 23 points. Natasha Cloud scored 11 points and grabbed 5 rebounds. In theory, Washington never had a chance in this game anyway as neither of its stars, Elena Delle Donne and Kristi Toliver, supplied anywhere near enough on the offensive end. Delle Donne could only manage 10 points and 7 rebounds while Toliver’s 5-point performance was a big disappointment.

Game 2 of the WNBA Finals will be in Seattle on Sunday afternoon. Tipoff is set for 3:30pm ET. The game can be seen on ABC.