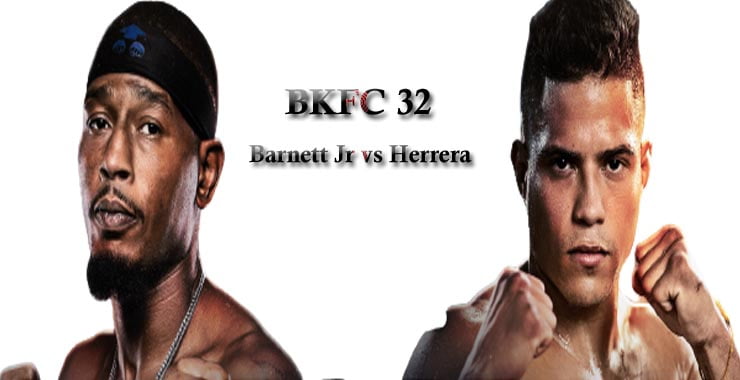 The Bare-knuckle fighting championship is set to stage another blockbuster PPV for its fans this  Saturday, November 15 at Caribe Royale, Orlando, Florida. The event is headlined by the BKFC veteran Reginald Barnett Jr. who will be up against highly talented, Geane Herrera. The 36-year-old Barnett Jr. has the most number of appearances in the promotion at 135 lb while Herrera has just one fight in the company so far.

Barnett Jr. is coming off a technical decision win over Jarod Grant back in July. An accidental poke resulted in Grant being unable to continue the fight and as a consequence, the decision was given in favor of Barnett. Barnett Jr. has had a good time in the promotion so far. The Virginia native holds the record of 7 wins and 3 losses. And cometh this Saturday, he will look to improve his record but it will be an uphill task against a fighter of Herrera’s calibre.

Herrera, the former UFC combatant, has fought just once in the BKFC cage. But carries a handsome experience on his back. The Florida native will have a home crowd cheering him and he will look to take advantage of it. A win over veteran Barnett Jr. can propel his career to a newer height. Besides that, in the co-main event, Jared Warren will meet Jay Jackson in a scheduled middleweight bout at BKFC 32. Here is all you need to know about Barnett Jr. vs Herrara, including live stream, main card and prelims.

The Bantamweight headliner between Reginald Barnett Jr. and Geane Herrara is set to take place this Saturday, November 5 at Caribe Royale hotel in, Orlando, Florida. The prelims will start around 8 pm EST with the main event of the evening expected to come face-to-face in the ring at around 9 EST.

BKFC 32 is set to go down under in Orlando Florida this weekend. But if you are unable to get into the Arena, you can still enjoy the whole PPV on your electronic devices live. Here are some of the ways you can employ to watch BKFC 32 live broadcast on OolaTV .

Barnett Jr. vs Herrera will be available to stream online via Bare Knuckle TV and Fite TV platforms throughout the world. To watch it live on the BKFC streaming service, you will have to get access to their subscription which costs you around $12.95 One time Payment on Oolatv.