Celtics and Lakers Square Off in the Desert 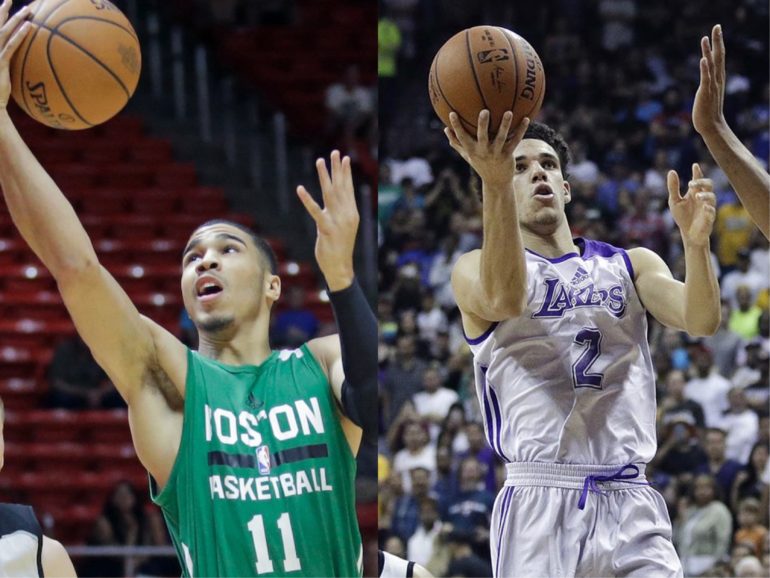 Before you dive into this amazing article, I (Chris) want to give a shoutout to Matt Leaman for his hardwork to make this article happen. Be sure to follow him on Twitter @matt_leaman to see more of the great work he gets done. Take it away Matt!

With the Thomas & Mack Center rocking for the second night in a row, the Celtics and Lakers continued their storied rivalry. The sold out crowd of 17,923 looked on with anticipation as the likes of Lonzo Ball, Jayson Tatum, and Jalen Brown took the floor.


Kyle Kuzma started the scoring for the Lakers with a corner three in the opening minutes. Just a few possessions later, Lonzo Ball stepped up and drained his first three pointer of the night, and the Lakers raced out to a 11-0 lead over Boston.


Early on Ball and the rest of the Lakers were moving the ball exceptionally well with quickness. One thing Ball has done extremely well to this point in the summer league is move the ball up-court to his teammates before defenses can fully set themselves. Boston closed the half on a 14-9 run and finished the quarter down 20-14.

The pace and scoring slowed down just a bit to begin the second period. With 6:40 left in the half, the Lakers still held the advantage 24-19. One glaring weakness that I saw early in the second quarter was Ball’s inconsistent defense. He continues to struggle with screens and staying in plays to this point. Opposing guards have been able to get by him and get to the basket.  Look for him to make adjustments such as moving better laterally and getting lower defensively.


As the second half began, the Celtics took control of the game in the third quarter, taking a 65-57 lead into the final quarter. As the fourth quarter rolled along the Lakers cut the deficit to two on a Lonzo Ball three-pointer with 8:22 remaining in the game. It sure was fun to see the crowd go wild after Ball’s made baskets throughout the night. We can all admit Lakers fans are much louder than those guys from Boston.

Quickly after that, the Celtics then looked to be running away with the game as Jayson Tatum took over. They were up nine with just 6:58 to go in the game. Lakers crawled their way back in it and Ball made another clutch shot to tie it all up at 72, with 2:56 left. From that point on, Boston got the better of the Lake Show and took this round in the rivalry, with a final score of 86-81.

On a positive note, Ball showed us all his excellent court vision and passing abilities throughout the night. He wound up getting his first triple double of his career finishing with 11 points, 11 assist, and 11 rebounds. Lonzo was able to get Kyle Kuzma, David Nwaba, Josh Hart, and others great looks with his precision passing. We finally got a glimpse of Ball driving into the lane with hopes of finishing at the basket, or kicking it out to open players on the wing. I believe it’ll be critical to his success to continue driving aggressively into the mid range area instead of just relying on threes.

Kyle Kuzma finished the night with 31 points on 12-of-26 shooting from the field. Through two games, Kuzma has shown he’ll be a valuable piece to the Lakers, with his ability to stretch the floor and knock down the three point shot. Tonight he connected on 5-of-10 attempts from deep. We will be seeing a lot of Ball-to-Kuzma highlights this season.

Also, recently re-signed shooting guard, David Nwaba (aka Mr. Dunk) got things going for the first time this summer, and stated his case for a roster spot. At 6’4-205 pounds, he was showing his hops early with a few thunderous dunks. He finished with 13 points, 8 rebounds, and 2 assists. To continue, Josh Hart, inserted into the starting lineup tonight because of Brandon Ingram’s absence, got into a nice rhythm throughout the game. He added 15 points on 6-of-13 shooting, and 5 rebounds. In all likelihood, Hart should find himself coming off the bench during the regular season, and contributing in a leadership role, as he spent four-seasons at Villanova doing just that.

That’s enough talk about the Lakers, I guess it’s time to finally give those Boston Celtics some credit, and talk about their star players in their victory. We can all admit the Lakers still have the upper hand in this storied rivalry though. Here’s Chris with a recap of Boston’s night.

Thank you Matt! Now it is time to talk about the WINNERS of last night’s affair (and this rivalry). If Paul Pierce’s nickname was ‘The Truth’, I think we are getting to point where we can dub Celtics rookie, and 3rd overall pick, Jayson Tatum ‘The Fact’. Tatum scored only 6 points and grabbed 6 rebounds in the first half on 3-8 shooting. But in the second half, he turned his whole game up a notch and scored 21 points (27 total) on 6-11 shooting, including a deep, buzzer- beating three point field goal to end the third quarter. He also grabbed an additional 5 rebounds to give him a double-double for the game.

One of the announcers for the game said that Tatum may not be a lot of flash but he makes up for it with substance. I don’t think I have seen two players as fundamentally different than Tatum and Ball. While I think Lonzo is a good player, he definitely seems to look for flashy moments during the game with his passing (which he excels at) and his awful three point shooting. If you don’t believe me, just ask his three point percentage so far during summer league; 12.5% (2-16) in just two games. I was very surprised with Lonzo’s passing and rebounding. Lonzo is the first player I have seen whose vision and passing skills make him look like Rajon Rondo when he played for the Celtics. On the other hand, Tatum is a player who doesn’t have a lot of flashy passing skills, but he does have a reliable fadeaway with his back to the basket and is also able to muscle is way down low.

Speaking of muscle, have you seen Semi Ojeleye?! The 37th overall pick from SMU showed that he may need to be on the Celtics roster. Ojeleye scored 19 points on 6 of 13 shooting and made 5 of 9 attempts from three point range. Ojeleye’s other two points came from the line but at 6’ 7” and 235 pounds, I get the feeling that the 22 year old could be playing in games for the Celtics a lot earlier than many might think. He certainly has an NBA ready body and, if he can shoot the way he did tonight all season, Brad Stevens and Danny Ainge will have no choice but to make room for him on the roster.

While I am happy with the two players I mentioned above, the one thing that concerned me with this game was the play of second year player Jaylen Brown. Brown never really got going in this affair and only managed 11 points on 4 of 13 shooting. Jaylen Brown is a great athlete, but he really struggled to find any sort of rhythm offensively and just couldn’t find a way to create his own shot them way Tatum demonstrated. Brown said that, during this summer league, he wanted to show off all of the hard work he put in this past offseason. Early on, he did so by scoring a career high 29 points against the 76ers, but this game was one in which Brown was one of the most highly anticipated players and he just didn’t bring his ‘A’ game. Brown is still a good player and will be quite an impactful force off the bench for this year’s Celtics squad.

Despite this being a Summer League game, I think that this game had every bit of intensity that this rivalry is known for. As a Celtics fan, I love seeing that the Lakers are on their way back to being competitive. I truly believe the league is at its best when the Celtics- Lakers rivalry is able to carry into the NBA Finals and both teams look to be doing just that as soon as possible. Storylines from both sides in this game provided plenty of context to be excited for, and the end results for both team, and the players, will have everyone talking until these two teams meet again in the regular season.

What do you think about Lonzo Ball’s Summer League performances? Would you take Tatum or Ball on your team? Let us know in the comments below!