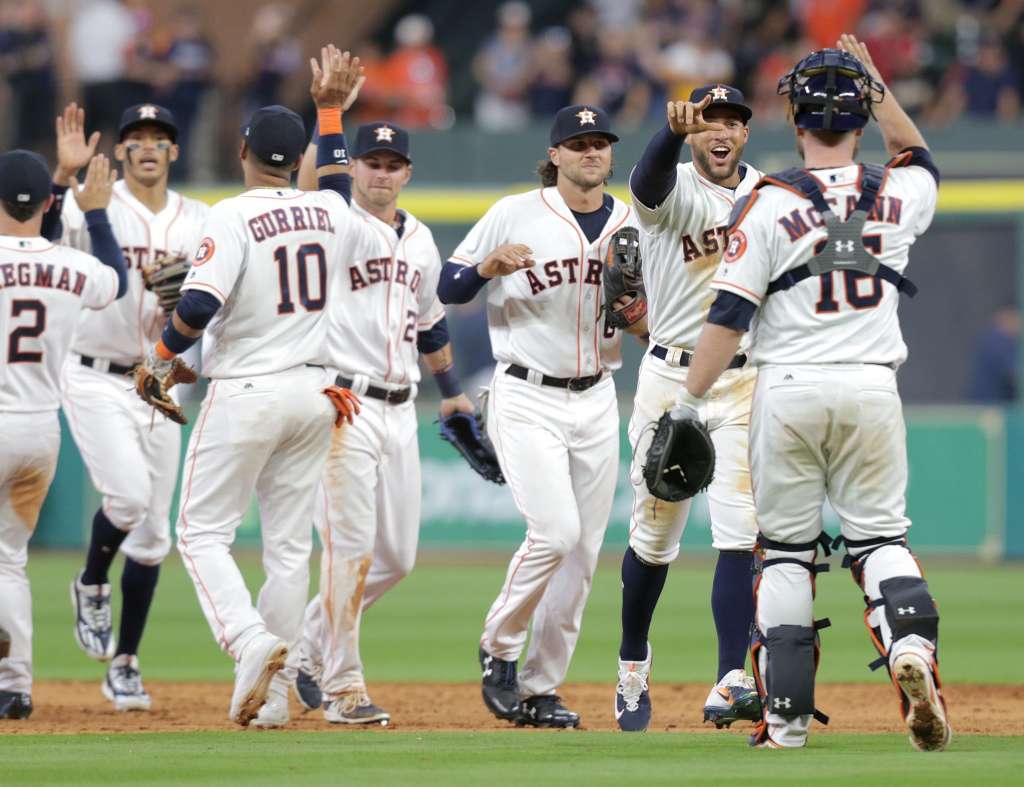 The Houston Astros remain one of the hottest teams in the MLB heading into the month of July as they look to capture the franchise's first-ever World Series title. Image courtesy of Elizabeth Conley / Houston Chronicle.

Ten days until the All Star Game in Miami and all 30 teams are at very different places in their respective seasons. There are those who have remained in the cellar, perennially at the bottom of the standings, ready to call it a season and trade away their few valuable players in an effort to rebuild for the future. Others are in the middle of the pack fighting for a chance to contend for a postseason berth. And then there are those who have been riding high all year long. Here is the first in a series of weekly MLB Power Rankings presented by FlurrySports. (All team statistics and records are accurate and up-to-date through 6/29/2017.)

The Twins have the worst home record in baseball at 16-25 and in terms of team ERA and WHIP, their pitching staff falls somewhere in the bottom third of the major leagues. So what are they doing ranked as the tenth best team in baseball? Put quite simply: they’ve done just enough to be in this spot. Currently in second place in the AL Central, the Twins spent the majority of the 2017 season in first place themselves, trading places with the Cleveland Indians twice in the past couple of weeks. If the season ended today, the Twins would occupy the American League’s second and final Wild Card spot. They have the second best road record (24-12) in the MLB. Fourteen-year veteran Joe Mauer is still the team’s most consistent at bat (0.290/0.358/0.405 4 HR 30 RBI) and a stalwart defender at first base. Third baseman Miguel Sano has been a much-needed power presence in the Twins’ lineup, tallying 18 homeruns and 54 runs batted in. Despite the team’s collective pitching struggles, there have been a few bright spots. The team’s ace pitcher Ervin Santana has excelled in his 16 starts (10-4, 2.80 ERA 1.05 WHIP 0.196 BAA) and has pitched an MLB-leading three complete game shutouts. Young Jose Berrios (7-2, 2.98 ERA 0.98 WHIP 0.196 BAA) has also been a pleasant surprise for Minnesota. Closer Brandon Kintzler has effectively preserved a Twins win in 21 out of 24 save opportunities this season, tied for second best in the American League. And probably the most notable of Minnesota’s saving graces this season has been their defense, ranked the third best in all of baseball, only committing 35 errors in 77 games played. The Twins are looking to make the postseason for the first time since 2010.

If someone had told you that by the end of June the Brewers would be in first place of the National League Central (ahead of the defending World Series Champion Cubs, no less), you probably would not have believed them. The Brewers lost 183 games in both 2015 and 2016 combined, and they had continued to look more like the shell of that 2011 team that reached the NLCS. Yet here’s Milwaukee exceeding everyone’s expectations. Third basemen Travis Shaw (0.294/0.357/0.563 17 HR 57 RBI) has had a breakout season, quickly becoming a reliable bat for the Brew Crew. First baseman Eric Thames has been on a power surge this season with 20 homeruns and 40 runs batted in. Milwaukee has had the benefit of their pitching staff performing at or above the league averages this year. Starting pitcher Chase Anderson (16 starts, 6-2, 2.89 ERA 1.11 WHIP 0.224 BAA) Has provided Milwaukee some stability to their rotation. The biggest thing holding Milwaukee back right now is their defense. Only the Chicago White Sox and the Oakland Athletics have a worse fielding percentage than the Brewers, who have committed 59 errors in 81 games played. Time will tell if Milwaukee can unseat the Cubs as champs of the Central.

After spending much of the season looking up at the Minnesota Twins, the defending American League Champions have retaken control of first place in the AL Central. Usurping Minnesota earlier this week, the Indians currently hold a slim 1.5 game lead on the Twins going into this weekend. Off to a slow start following a devastating World Series loss last season (where the Indians blew a 3 games to 1 lead to the Cubs, mind you), the Indians are now back on track. 2014 AL Cy Young Award winner Corey Kluber (12 starts, 7-2, 3.02 ERA 1.00 WHIP 0.205 BAA) has led an Indians pitching staff that is second in the American League in ERA (3.83) and WHIP (1.22). Designated hitter Edwin Encarnacion continues to punish opposing pitchers (17 HR 42 RBI), and third baseman Jose Ramirez (0.321/0.376/0.556 12 HR 36 RBI) has helped the Indians accumulate the 3rd best run differential in the American League (+56). With 84 games remaining, the Indians will try to fend off any challengers in the AL Central and seek redemption for their heartbreaking defeat last November.

Stop me if you’ve heard this one before: The Yankees are putting up big numbers on offense and have a guy who is well on his way to hitting over 40 homeruns and batting in over 100 runs. This guy goes by the name of Aaron Judge. Judge (0.331/0.451/0.699 27 HR 62 RBI) has been one of the biggest stories of the 2017, literally. He’s 6’7″ and 282 lbs, and for some reason he plays in right field instead of as the power forward for the Knicks. With Judge, the Yankees have the best home record in the American League (24-13), they lead the AL in runs scored per game (5.61), as a team have hit the 2nd most homeruns in all of baseball (122), and are currently sitting in the American League’s first Wild Card spot just 1.5 games behind the first place Red Sox in the AL East. With starting pitcher C.C. Sabathia soon returning from a hamstring injury and outfielder Aaron Hicks set to return to action sometime in late July, the Yankees are priming themselves for yet another push towards the postseason.

The Red Sox have found themselves in first place in the AL East yet again. That’s no real surprise, but they haven’t run away with the division title just yet. Boston boasts the 2nd best home record in the AL (25-14) in addition to the 4th best run differential (+40). That solid run differential can mostly be attributed to their pitching staff, which is 4th in the AL in both ERA (3.87) and WHIP (1.26). Carrying the torch for that pitching staff is Chris Sale. In his first season in Boston after spending seven seasons with the White Sox, Sale has been nothing short of dominant (16 starts, 10-3, 2.77 ERA 0.91 WHIP 0.200 BAA). Sale also leads the majors in strikeouts with a whopping 155. Despite being third in the AL in team batting average (0.266), Boston’s lineup hasn’t been especially potent, and they have at times struggled to create runs. Couple that with being ranked 12th out of 15th in the American League in terms of defensive fielding percentage (with 51 errors committed in 79 games played), the Red Sox may have their hands full with teams like the Yankees by season’s end. Still, the Red Sox are favored to win the AL East–for the time being.

It seems kind of strange that a team that’s in third place in its division would be this high in the rankings. The Rockies, however, have the unenviable circumstance of being in the same division as the Diamondbacks and the Dodgers (we’ll get to those two teams later). Colorado plays well at home (22-15). It must be that Rocky Mountain air. It could be center fielder Charlie Blackmon. Blackmon is the clear leader of the Rockies’ offensive attack, posting some solid numbers (0.314/0.369/0.575 16 HR 56 RBI). They play well on the road too (25-19). Despite being ranked 19th in pitching, their stellar defense helps them out of plenty of jams (1st ranked in NL, 34 errors committed in 81 games played). How are they only in third place again? Oh yeah, the NL West is pretty loaded right now. If the season ended today, that division would have three playoff teams, including Colorado in that 2nd Wild Card spot in the NL. Not bad for a team that hasn’t posted a winning record since 2010.

What’s not to like about the Nats right now? They hold a first place lead in the NL East by 9.5 games, score the most runs per game in all of baseball (5.65), and have the second best batting average in the MLB (0.278). Their pitching staff ranks in the top 5 in the National League in most major statistical categories. Two-time Cy Young Award winner Max Scherzer continues what has been an outstanding career. On the season, Scherzer has a 9-5 record with a 2.05 ERA, a 0.78 WHIP, and a 0.164 opponent batting average in 16 starts. Ryan Zimmerman, Daniel Murphy, Anthony Rendon, and Bryce Harper have combined for 67 homeruns and 225 runs batted in. Basically, the Nationals are on a roll this season, and it’s unlikely that they will be stopped any time soon.

Arizona is another one of those really good NL West teams. The D-backs have one of the best home records in baseball (30-12). Their offense is on a tear right now: hitting 0.265, scoring 5.65 runs per game, and have created for themselves a run differential of +108. That’s pretty good. What’s even better is that their pitching has also been terrific. As a staff Arizona posts a 3.38 ERA and a 1.24 WHIP, both are in the top three in the NL. Zack Greinke and Robbie Ray have brought the pitching and Paul Goldschmidt and Jake Lamb have brought the offense. What has yet to be brought in Arizona is the defense. The Diamondbacks are ranked 13th in the NL in fielding, committing 53 errors in 80 games played. All things considered, still a great regular season campaign being put together. Hard to believe that Arizona isn’t even the best team in the NL West with numbers like that.

The Dodgers are definitely making Vin Scully proud. LA has the best home record in the MLB (33-11). Eight out of their last ten games, the Dodgers have emerged victorious. A ten game winning streak was ended earlier in the week. The Dodgers have the best run differential in baseball, have allowed the fewest runs, have the best team ERA and WHIP, and they have a 3-time Cy Young Award winner starting on the mound for them. Clayton Kershaw (17 starts, 12-2, 2.32 ERA 0.91 WHIP 0.202 BAA) continues to be a force of nature as he gives opposing offenses nightmares with his play. Shortstop Corey Seager and 21 year-old left fielder Cody Bellinger have been the key producers for LA on offense, as Yasiel Puig’s average remains inconsistent. The Dodgers rank in the bottom third of teams when it comes to defensive fielding percentage. In spite of the defensive play, the Dodgers have handily made themselves the second best team in baseball.

Was there ever any doubt as to who would top the list? Not only do they have the best record in the MLB, the Astros also have the best road record in the MLB (29-9). The Astros hold a first place lead in the AL West by a more-than-comfortable 13.5 game margin. The Astros score a sultry 5.56 runs per game, leading the majors in homeruns (128) and batting average (0.283). No pitching staff in the American League has a better team ERA (3.82) or WHIP (1.20) than the Houston Astros. We could go on about Jose Altuve, Carlos Correa, and George Springer constantly propelling this offense to new heights but at this point who doesn’t know about this team’s lineup? Before hitting the disabled list, starting pitcher Dallas Keuchel was 9-0 in his first 11 starts. Lance McCullers, Jr. has more than picked up the slack in Keuchel’s absence, posting a 7-1 record with a 2.53 ERA and a 1.04 WHIP. The Astros seem to be confident that Keuchel will return sometime after the All Star Break after recovering from an apparent neck injury. When that happens, not only will Houston set their sights on a trip to the postseason with an AL West Division title in tow, but they will also have their sights set on reaching the Fall Classic.