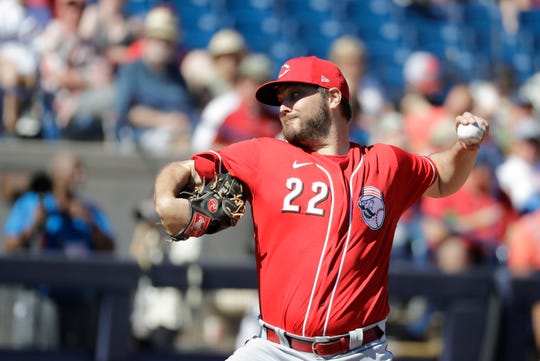 The Cincinnati Reds had one of the MLB’s most exciting offseasons. Free agency was a success and the starting pitching rotation has been incredibly hyped up. Here are five things to take away from Reds’ Spring Training.

As a Reds fan, the past couple of years of free agency have been absolutely thrilling. I personally remember the palpable excitement around picking up Yasiel Puig in early 2019 and the immediate impact he seemed to have not only on the fans but the team itself. This year was even better. Most of our pickups came from teams in our division, which will surely make the season even more interesting, should we ever get to play it.

Mike Moustakas and Nick Castellanos playing against their former teams will make for great storylines. The player that has been most interesting, in my opinion, is international pickup Shogo Akiyama. Not to mention the bolstering of our starting pitchers and bullpen with players like Pedro Strop and Wade Miley. Keep in mind this Spring Training was cut tragically short, so some of the marquis players did not get to sink into their spots as they normally would.

From his usage in Spring Training, it’s blatantly obvious what role the Reds will be using Akiyama in—leadoff hitter. This spot was mostly filled last season by Joey Votto, who was frustratingly unreliable all season. This is the problem Akiyama will remedy, if he can hit like this consistently. During Spring Training, Akiyama carried a .321 average over 28 at bats. With a .724 OPS compared to Votto’s .462, Akiyama is who the Reds have been looking for at the top of the order.

Moustakas and Castellanos saw less plate appearances, at 15 and 16, respectively. They did not post promising averages in their eight games. Moustakas held a .267 and Castellanos a .188. The difference is in Total Bases, Moustakas taking 11 total with two Home Runs for a 1.154 OPS as opposed to Castellanos’ four total bases for a .485 OPS. Each player struck out five times.

Reliever Strop posted a total of four innings pitched with two strikeouts and an ERA of 2.25. This seems like it could signal a return to form from his disappointing 2019 season with the Cubs.

Miley was hailed by fans as a huge pickup going into the regular season. The coaches mostly considered him a proverbial “cherry on top” of a deep starting rotation. However, Miley struggled mightily this Spring Training. Personally, I am still incredibly excited about Miley joining our rotation and feel that he will be great this season in a Reds uniform, but the small amount of stats look very bad in Spring Training. Miley accumulated a five strikeouts in 3.2 innings pitched and his ERA looked abysmal, at 17.18. If we had been able to carry out the preseason in its entirety, I’m absolutely sure that Miley would have looked much better, since the Reds used him sparingly, to say the least.

We Could See Prospects Sooner Rather Than Later

This year, the Reds saw some of the prospects have excellent performances. In particular, we saw breakout performances from Jose Garcia at shortstop and Tyler Stephenson at Catcher.

While we have two options currently at catcher, with Tucker Barnhart and Curt Casali, it felt like there was a great amount of competition this spring training at the position. Stephenson hit well, with a .375 batting average and 1.250 OPS. He played behind the plate with a 1.000 fielding percentage on 38 total chances.

This brings us to shortstop Jose Garcia. Garcia had Reds fans very excited with his excellent performance at the spot, where the Reds don’t have a clear-cut starter yet. This makes fans understandably excitable when a young player really distinguishes himself. Especially with the job Eugenio Suarez did replacing Todd Frazier after his storied 2015 All-Star performance and season. Garcia’s bat was phenomenal during Spring Training. He had a .269 average, .769 slugging percentage and a 1.069 OPS. His hitting stat line breaks down to seven hits, two doubles and four homers with seven RBI over 26 at bats. He reached base at a rate of .300 OBS.

With six putouts and nine assists over 19 total chances, he played a solid defensive game consistently over Spring Training, which reassures the Reds faithful that he could see the field in the Majors, should Freddy Galvis not fill the spot adequately. We likely will not see him in 2020, but it does give us a good indicator that the prospects the Reds are putting together are developing well and are good investments.

Reds fans will surely remember Derek Dietrich’s incredible 2019 tear at the plate, and the frustration when his bat went cold soon after. Dietrich was playing solid baseball for a good bit last season and was a personality that made him the talk of Reds fans and the city of Cincinnati before his run of good luck ended. He was then sent back to the AAA Louisville Bats. Dietrich, however, showed a more solid and reliable batting performance this year at Spring Training, which is something that fans should be looking out for in 2020. While he struggled with striking out, his slugging percentage was a whopping .478 with a .738 OPS.

Dietrich proved himself as a capable second baseman, with another 1.000 FPCT. His 18 putouts and seven assists over 25 total chances proves he is a solid fundamental second baseman and is more than capable of filling in.

Aristides Aquino was a huge story last season. His debut with the Reds was a record-setting one, when he became the first player to reach 13 homers in his first 27 major league games. “The Punisher,” as fans lovingly dubbed him, was one of the bright spots on our lineup in the second half of the season. But he struggled to recapture that hitting prowess during Spring Training. Aquino’s hitting stats were uncharacteristically bad, with a .077 average, .200 OBP and .277 OPS. He struck out 11 times and walked twice in his 26 plate appearances, only putting the ball in-play for two hits.

Does this mean Aquino isn’t the star we all thought he was last year? Was it all for nothing? Absolutely not. Aquino will be back and we will see him in a Reds uniform again, he just needs a little time to develop in the farm system before he comes back out and surely charms Reds Country all over again. It’s probably better this way anyways, as the team he will come back to will have some better pieces and a lot more momentum whenever we see “The Punisher” step up to the plate again.

The Reds starting pitching rotation is one of the most hyped groups of players going into the 2020 season. The current depth chart names Luis Castillo, Sonny Gray, Trevor Bauer, Anthony DeSclafani and Wade Miley our current starting five. But the Spring Training performances of these five make the predictions a little muddled. Again, these are just spring numbers and, once the season kicks off (if it ever kicks off), I think some of these fears about the starting five for the Reds will turn out to be unfounded.

Still, some of the stats were concerning, especially from Miley and Castillo. No pitcher started more than four games and none pitched more than 10 innings total. Castillo and Miley surprisingly racked up the most earned runs, with 8.68 and 17.18 ERA, respectively. Castillo pitched 9.1 innings over four starts, striking out 14 batters for an 0-2 record. Miley pitched 3.2 innings over two starts and struck out five batters for an 0-1 record. The rotation was led by Bauer and DeSclafani, with the lowest ERAs of 1.0 and 1.50, respectively, over their two starts, with Bauer pitching nine innings and DeSclefani pitching six. They both posted a 1-0 record. Gray continued to show progress over three starts, seven innings pitched, 1-1 record, an ERA of 5.14, eight strikeouts and three walks.

The numbers here make it look more dire than it is. My predictions are that Castillo will still be the Reds ace despite his odd Spring Training. Miley is still a World Series-caliber pitcher who has shown improvement all the way up to this point. The pitching we had is going to be as good as last year. There is no need to panic.

But one thing we can count on is this: 2020 for the Reds will be successful, whenever it begins. Great American Ball Park will still be a fun place to go catch a baseball game, from Opening Day all the way through (hopefully!) the Playoffs. The Reds will have a lot more games in the W column.