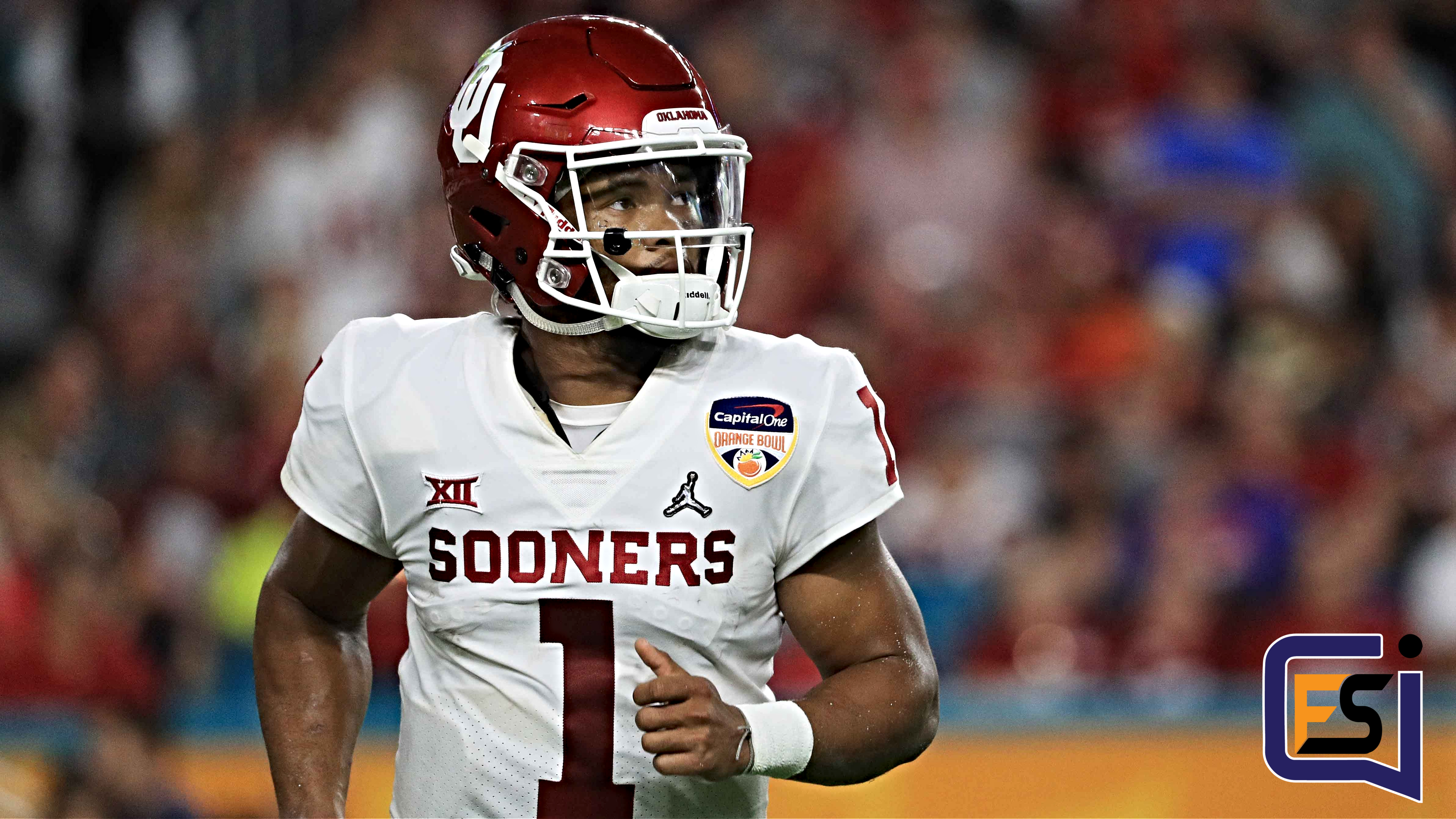 Murray seemed to be the slam dunk choice at the top of the draft this year. While I like Murray, I don’t really love him. I still think he may have a tough time adjusting to the NFL style of play. Also, as Russell Wilson is the only starting quarterback currently under six feet tall, I’d say the chances of him succeeding is a little lower than most. This grade also built in the fact that they haven’t been able to trade Josh Rosen yet, and the number of suitors is dwindling quickly.

The top prospect in this year’s draft falls to the second pick, with the 49ers scooping him up. Bosa also fills one the 49ers’ biggest needs in a pass rusher, and he will solidify that for years to come.

I love Williams as a player, but I’m just not sure he was the right pick for the Jets. I feel like getting a pass rushing linebacker like Josh Allen would have been the better play here. Williams is still a solid pick, however.

Our first reach of the draft comes from the Oakland Raiders. Most believe Ferrell to be a first round pick, but figured to see his name late in day one. He’ll be a solid player, but I just don’t see that superstar potential that you look for in a top-5 guy. Josh Allen or Devin White should have been the pick here.

Tampa Bay had the top inside linebacker fall to them with the fifth pick, and I don’t think it was a very hard decision. When talent meets need this early in the draft, it’s a great pick.

The Giants, who were in need of successor to Eli Manning, found their guy. I just don’t like the move for several different reasons. The first one being I don’t think he’s the second-best quarterback in this draft–Dwayne Haskins is that guy. I also think they should have used this pick to solidify either the offensive line or get a high end defensive guy.

The best move for the Giants would have been to call the Cardinals and trade a second or couple third round picks for Josh Rosen. If Rosen had come out this year, I think he would have been the second-best quarterback available. Only needing to give up a second round pick instead of the sixth overall pick seems enormous.

The Jaguars stayed put and had the top pass rushing linebacker fall to them, thanks to some questionable picks in the first six. Great snag for a defense than regressed quite a bit last year.

I get wanting to grab some more weapons for Matt Stafford, but I just can’t find the need to ever use such an early pick on a tight end. Hockenson will probably be a great player, but with Ed Oliver still on the board and the need for a high end defensive presence, Detroit is going to regret this pick.

One of my favorite players in the draft is heading to Buffalo to replace longtime fan favorite Kyle Williams, who just retired. The only drawback to this pick is it doesn’t help a Bills offense that was one of the NFL’s worst last year. However, they made the right decision, as I don’t see any offensive playmaker worthy of this pick.

Bush is definitely worthy of a top-10 pick. The only caveat is what Pittsburgh had to give up to grab him. Losing their second round pick could prove costly, as they still have other holes and depth issues across the board. Love the pick, just taming the grade due to what was needed to get him.

Gary will be a good, but not great, player in the NFL. Packers just signed two pass rushing guys, in Za’Darius Smith and Preston Smith, so filling other holes on the team may have been a better route. Possibly grabbing one of the top offensive lineman or wideouts could have made Rodgers a lot happier.

One has to wonder what direction the Dolphins are heading in. With a huge hole at quarterback and Dwayne Haskins still sitting there, I’m shocked they didn’t pull the trigger. Wilkins should be a plug and play player for the Dolphins, but I’m sure I won’t be the only one questioning this pick. If they somehow end up trading for Josh Rosen, this pick will move up a grade.

The Falcons sorely needed some help up front on the offensive line and they got that with Lindstrom. While he probably wasn’t the top lineman left on the board, can’t fault them for getting their guy.

If you’re a Redskins fan, you had to be excited to see Haskins fall to you at 15. While I’m not really high on any of the quarterbacks in this year’s draft, it’s not often the second best quarterback makes it all the way to pick 15. They could have given up a lot to move up but didn’t.

The Panthers really needed some pass rush help once Julius Peppers retired, and they found that in Burns. If he can bulk up a little bit and not lose a ton of speed, he could be one of the best rushers from this draft.

The third Clemson defensive lineman to come off the board in the first 17 picks–impressive. One has to wonder if they all are superstars in the making or just really good collectively. I guess we’ll see. Lawrence is my least favorite of the three, which is why he was drafted last. The big middle pluggers, in my mind, aren’t worthy of this high of pick, so I’m going to grade them a little lower.

The Vikings had one of the worst offensive lines in the league last year, so it’s no surprise to see them go this way with their first pick. I think if Bradbury wouldn’t have been there, this would have been a prime trade down possibility. As it stands, the Vikings are getting the top center in the draft.

Had it not been for an ACL tear back in February and a video of him punching a woman in high school, Simmons would probably been a top-10 pick. He’s one of the most disruptive players in the draft, if he can recover fully and keep his head on straight. The Titans are getting one heck of a player.

This is about the area when I would start considering a tight end. Fant is more known for his receiving and will need to work on his blocking a lot if he’s going to be able to play every down in the NFL. With that said, the Broncos have been searching for receiving weapons. and we know Flacco loves his tight ends.

Packers are going all out on the defensive side of the ball this year. Already grabbing defensive lineman Gary from Michigan, they trade up from 30 and took another Big 10 defender in Savage. They only had to give up two 4th round picks to move up the 9 spots, but I feel he still would have been there at 30 had they stayed. Either way, Packers add more to the secondary after selecting two corners in the first two rounds last year.

The Eagles wanted to continue to bolster their offensive line with Jason Peters’ career winding down. Dillard is a great pass blocker, but some wonder if he has the nastiness to be an effective run blocker in the NFL. He’s still one of the top offensive line prospects. Solid pick for the Eagles.

This is the biggest shocker of the first round. Most had projected him to be drafted somewhere in round 3. Add that to the fact that Jawaan Taylor is still on the board, and this pick doesn’t make much sense at all. It feels like they wanted Dillard, and then panicked when he went the pick before.

Oakland once again makes another head scratching pick, in my opinion. With so many good prospects on the board still and not one running back taken yet, they took one anyways. While Oakland really needed a running back with Marshawn Lynch retiring, there would have been plenty of choices available to them in the later rounds of the draft that would have been just fine.

Brown is one of the most electric players in this draft. While he wasn’t my top-ranked wide receiver in this class, I think he fits perfectly in the Baltimore offense with Lamar Jackson running the show. They turned from one the most boring offenses in the league with Joe Flacco running it, to what could be one of the most interesting ones with electric players in Jackson and Brown running around. Get ready, AFC North.

Sweat is one of the best players in this year’s draft, but fell due to some health concerns with his heart. This is one of the picks that could turn into a steal or a complete bust very quickly. Which way it goes is anyone’s guess. One storyline to keep an eye on this year.

Chargers needed to get bigger in the middle up front. Tillery brings all that and some. He needs a little bit of refinement, but has tremendous upside. He could be rotation player for this season, but if he puts it all together, he could be one of the best big guys in the league.

I’m not as high on Collier as some people. I don’t see him being able to beat anyone with his speed, so he has to lean on his strength and technique to get consistent pressure, in my eyes. He may be a solid defensive end, but I don’t see high end potential with him.

I think he’s the best corner in this draft, and the Giants agreed by trading up to get him. He isn’t the most complete corner, as he isn’t much help in the run game. However, with today’s pass-happy NFL, it shouldn’t be too much of a downfall.

Atlanta moved up to take their second offensive lineman of the draft. While I like the move up to get another lineman, I would have rather taken Jawaan Taylor here again, as another lineman is taken ahead of him.

My top wide receiver prospect in the draft falls all the way to 32, where the Patriots were just patiently waiting. Belichick nailed this one. Great pick.

Tyreek Hill Audio Released, Suspended by Chiefs
What Should Happen to Tyreek Hill?