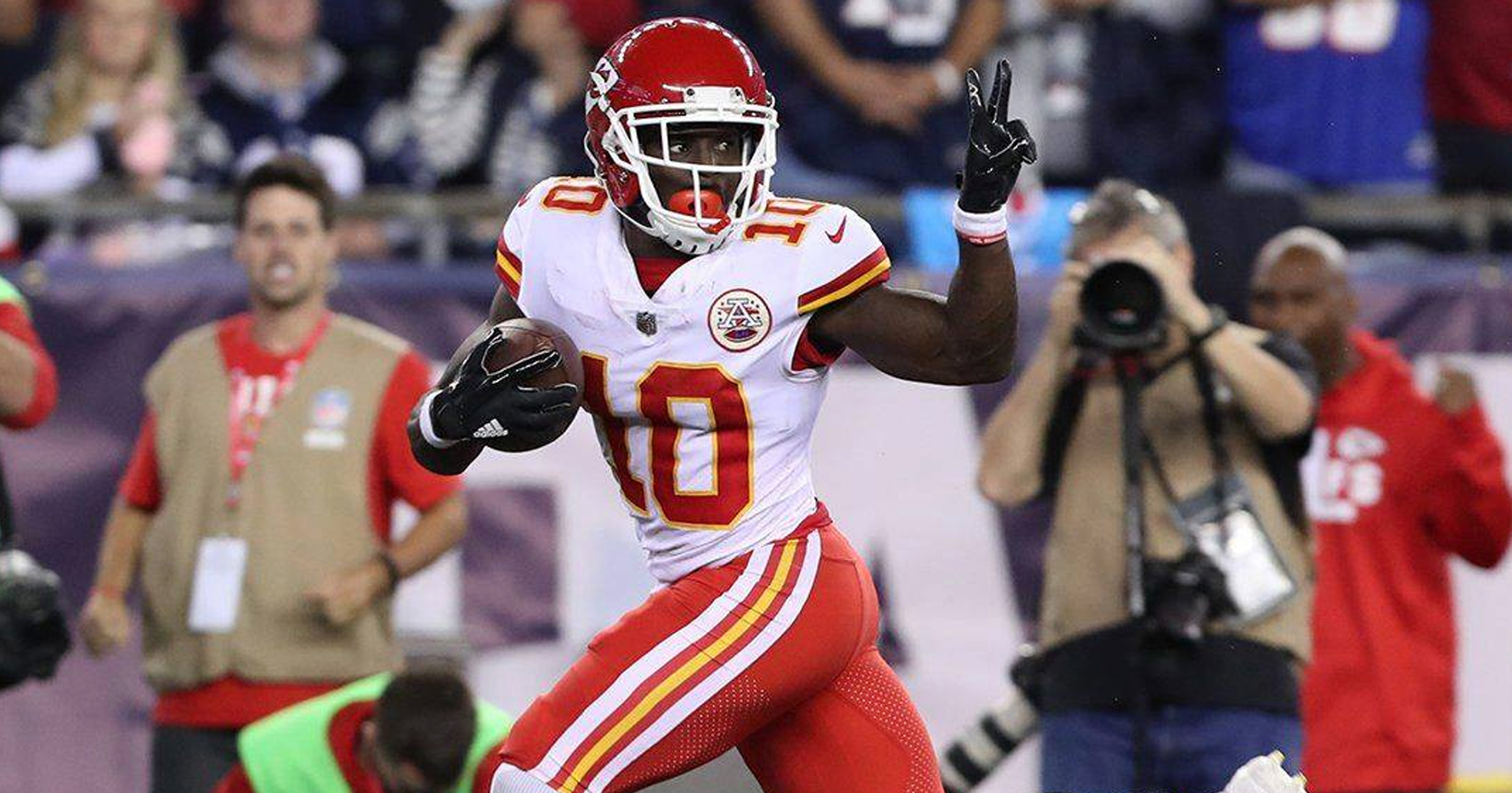 Tyreek Hill has had a problem with domestic violence since his early days in Stillwater, Oklahoma, when he played football for the Oklahoma State Cowboys. Hill’s case was staggering.

His then girlfriend, now fiancee, Crystal Espinal was eight weeks pregnant and showed up to the emergency room in Stillwater with cuts and bruises all over her face and neck.

Hill has had a history of anger issues, but things seemed to be behind him. People still remember what he did, but at the same time had forgotten about it because he was so mesmerizing to watch on Sundays. It always lingered in the back of everyone’s minds, though.

Then, suddenly, this offseason it was forcefully shoved back into the forefront of everyone’s minds once again when a report surfaced that Hill had harmed his three-year-old son, the same child Espinal was pregnant with when Hill was kicked off the team at Oklahoma State.

Now, with this audio clip being released and the Chiefs taking Mecole Hardmen in the second round of this year’s draft, all signs point to Hill’s time coming to a close in Kansas City, and maybe even the NFL.

What the Ray Rice Saga Taught Us

Back in 2014, Ray Rice was arrested for domestic violence after punching his then-fiancee, now-wife, in a hotel elevator. The NFL reacted by suspending Rice, and he hasn’t been seen in the NFL since.

The whole saga that was the Ray Rice case was confusing, to say the least. Rice’s actions in the video released by TMZ were abhorrent, and definitely not the actions of someone who should be on the main stage like the NFL.

Rice was on the downhill side of his NFL career, and the Ravens, the team Rice played for at the time, seemed to be looking for his replacement at the combine when the news of this surfaced.

Rice and his wife were arrested in Atlantic City in February during the combine, and things only went downhill from there. Eventually, the NFL suspended Rice for two games, and the backlash from what was basically a slap on the wrist was as expected.

Then in September, the full video was released, and months after the NFL and Ravens organization had seen the video and had time to react accordingly, Rice was given the punishment he deserved. He was released by the Ravens, and suspended indefinitely from the NFL.

But then a month later, Rice won a case, where an independent arbitrator ruled that Rice didn’t lie to the commissioner in a previous meeting between the two, and because of that, ruled that the upgraded suspension was uncalled for, and without cause, meaning that Rice was reinstated into the NFL, and could sign with any team.

But, that never happened. Teams were afraid of the backlash signing Rice would bring about, and rightfully so. Many fans were unhappy that Rice had been reinstated at all, so Rice went unsigned, and hasn’t been heard from since.

Ever since the NFL gravely mishandled the Ray Rice case, they have been walking on eggshells with any new case that comes about like this one.

Last offseason, when a video surfaced of then-Chiefs running back Kareem Hunt, pushing and kicking a 19-year-old female in a hotel hallway, the NFL reacted quickly by placing Hunt on the Commissioners Exempt List, and shortly after the video was released that proved what Hunt had done, the Chiefs released their star running back in the middle of the 2018 season.

To find a case that is somewhat similar to Hill’s, we need look no further than NFL veteran running back Adrian Peterson.

Back in 2014, Peterson was accused of and arrested for reckless or negligent injury to a child after beating his child with a small branch from a tree. Peterson was eventually cut from the Vikings following the incident, and would bounce from the Saints to the Cardinals, and is now enjoying the waning moments of his career in Washington.

There is also a difference between Hill and Peterson’s cases. Peterson was “disciplining” his child with a “switch,” and aside from cuts and bruises to child’s back, buttocks, ankles, legs and scrotum, which is excessive. Unlike Hill, however, that was the extent of Peterson’s child’s injuries. Hill’s son has a broken arm.

While it is unclear how Hill’s son broke his arm, in the audio, Hill’s fiancee says her son told her that “Daddy did it.”

In both the Ray Rice and Kareem Hunt cases, there was video evidence that forced the NFL to take action. In both the Peterson and Hill case, however, there is no such video. It’s spouse vs. spouse, and the NFL has to allow the police and District Attorney’s Office to do their jobs and let them decide what the right course of action is.

Cases like this are tricky for the above reason. If the league jumps to conclusions and suspends Hill without proof, then things turn out in Hill’s favor, then the NFL look bad. However, if they drag their feet, and it turns out that it can be proven that Hill did harm his child, then the NFL also looks bad for not taking action.

In the Peterson case, the NFL allowed Peterson to return to action fairly quickly. Granted, as I stated before, Peterson’s accusations weren’t as egregious as Hill’s. They were bad, don’t get me wrong, but Hill’s case could be much worse.

For now, the Chiefs have done the right thing. They have suspended Hill from all team activities indefinitely. This leaves them open to allowing him to return to the team if things work out for him, but also saves face for the franchise if things don’t work out.

The Chiefs have already drafted Hill’s replacement in the second round of this year’s draft in Georgia alum Mecole Hardmen. So, all signs point to Kansas City washing their hands of Hill regardless of how things work out. His checkered past, on top of all of this, paints a bad image for the Chiefs if they keep him.

Whether the Chiefs keep him or not remains to be seen, but if they cut him, the question then becomes: Will another team be interested in picking the troubled star up?

The talent is there. But there will be backlash regardless. Just being accused of something like this will follow Hill for the rest of his career, and rightfully so. But eventually, the NFL has to take a stand. They’ve done so with domestic violence cases, and while those cases are horrible, they pale in comparison to causing damage to an innocent child.

In fact, if nothing else, the league should be even harder on those found guilty of such acts, and Tyreek may be a good chance to do just that.