Carson Wentz is on fire this season, and so are the Eagles. Philadelphia beat the Cardinals to improve to 4-1, one of three teams to hold that mark currently in the NFC. Wentz is slowly making the shift towards being a legitimate top-level quarterback, as the Eagles make the same shift towards playoff contenders. In a division where every other team was favored coming into the season, the Eagles may be a surprise leader, as they continue to prove their doubters wrong.

One week the Steelers are the best team in football, then they lose to the Bears. They show why they can win the Super Bowl, then Roethlisberger throws five interceptions against the Jaguars. The Jaguars are leagues above where they have been in the past, however, it is the inconsistency of Pittsburgh that is the most alarming news here. The Steelers quarterback himself told reporters he “might not have it anymore.” This news gives a reason to be concerned if you are a fantasy owner of any of the “Big Three” in Pittsburgh, or a Steelers fan. The news also adds to the confusion the rest of us have trying to predict where this team will end up.

Aaron Jones, surprise bright-spot of the Packers victory against the Dallas Cowboys. While Jones didn’t have the best performance on the day (we’ll get to him later), he definitely was the most pleasant surprise. If you haven’t heard of Jones before this week, maybe you should check out our interview with him back in August! The Packers improved to 4-1 as the rookie running back broke onto the scene filling in for the injured Ty Montgomery, running for 125 yards on 19 carries, and also got a key touchdown for the Pack. Jones looked explosive and could find himself a permanent home in Green Bay as a young workhorse.

And he played for Tampa Bay. Nick Folk went 0-3 on the day, leading to a five-point loss to the Patriots. The Patriots can thank their lucky stars that Folk was so off on this occasion, as they have to live with another close game. Folk, on the other hand, was released in favor of Patrick Murray. Tampa Bay has played well this year, and although they could have won against the Patriots, they still showed why they can’t be laughed off this season.

The Giants fall to a shocking 0-5. The worse news? They now have to try and right the ship without their best player. OBJ is out for the rest of the season with a broken ankle, and was the only scoring burst for the Giants so far this season. Giants fans and fantasy owners everywhere may now reach for a box of tissues. If one receiver down wasn’t enough, the Giants also lost Brandon Marshall and Dwayne Harris for the year, and the status of Sterling Shepard is up in the air. Chad Johnson and Terrell Owens reached out to the Giants after these injuries, and they may actually have to listen to them.

Well, the gatekeepers of the NFC West aren’t ready to give away the division crown yet. The much improved Rams just couldn’t overcome the defense of Seattle, as the Seahawks won 16-10. The offense didn’t shine for Seattle yet, but five turnovers proved to be enough to secure a victory this time around.

7. Houston Has a Problem

JJ Watt is out for the season…again. The best defensive talent in the league has had one injury after another, and his latest may be the worst. An upper shin injury has sidelined Watt for the rest of the year, and just as Houston was finding its way. Deshaun Watson has the offense firing as they almost defeated the mighty Chiefs, but the defense looked weak without Watt and Mercilus. Only time will tell if the Texans can win without Watt, and if the DE will ever be the same player again.

The Panthers are the third NFC team to reach 4-1, and seem to be reminding everyone of the fact we are only one year removed from an (almost) undefeated squad. Cam Newton shined, with three touchdowns, to lead the Panthers over the very good Detroit Lions, 27-24. This week was full of highs and lows for Newton, however, as he made sexist comments to a female reporter early in the week. While his level of play does not excuse his actions, it seems the Panthers are not distracted by the attention surrounding their controversial QB.

9. The Best Quarterback In the League Does It Again

And his name is AARON RODGERS. Yeah, I said it. He is the best. Why? Because he’s doing it on his own. His starting RB was hurt, his O-line is in shambles, and his WR’s are constantly fending off the injury bug as well. Meanwhile, Rodgers led another fourth-quarter comeback, throwing for 221 yards and three touchdowns, while also rushing for 32 huge yards. A game-winning drive that started with just over a minute on the clock was nothing for the baddest man on the planet, who may will the Packers to the postseason and beyond. 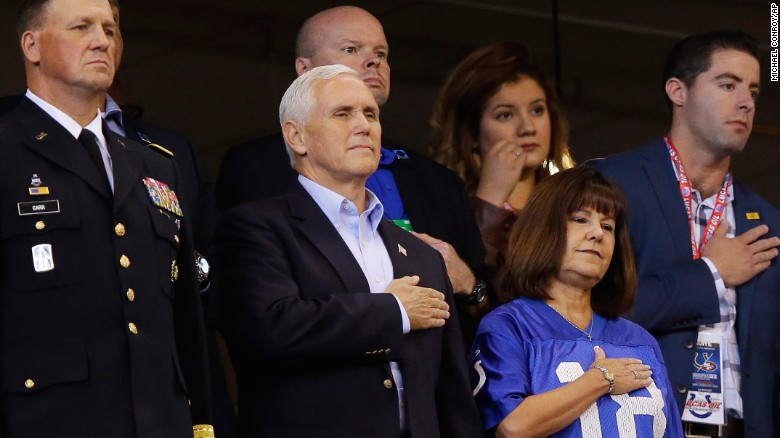 The political controversy surrounding player protests during the national anthem continue. The difference this time? Vice-President Mike Pence left the Colts-49ers game after the National Anthem in protest of the protests. This latest display was regarded by many players as a political statement focused on targeting attention away from talks of diversity. Meanwhile, it seems the NFL is a long ways away from moving away from the political spotlight. Things may only get worse from here.